Who is the Fastest Player Ever in the NBA? 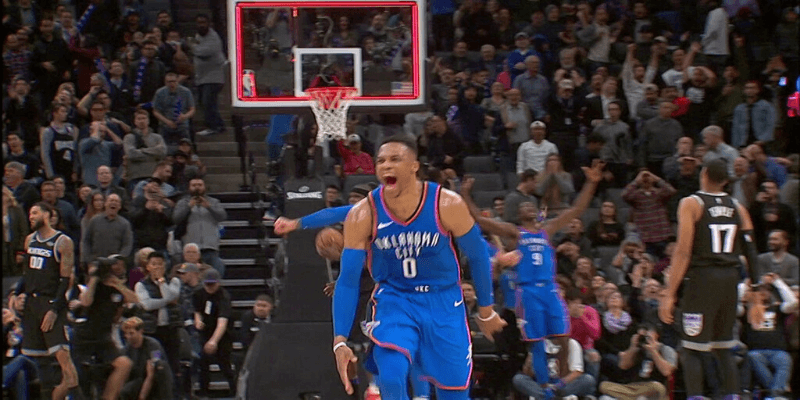 Speed is an extremely valuable asset on the basketball court. The fastest players are able to get to the rim for easy layups or evade and maneuver their way to get open for shots.

Basketball, in general, is a fast-paced sport that involves plenty of running and sprinting. There’s an old saying I’ve heard several basketball coaches say over the years that goes something like, “if you’re not tall, you better be fast.”

NBA players are all more athletic, taller, or faster than the average human. It’s these physical gifts that set them apart and allow them to perform at the highest level of basketball. While height is an obvious advantage to the game, speed can be another factor that turns a good player into a great one.

So who is the fastest player ever in the NBA?

#3 Fastest Player Ever in the NBA – Allen Iverson

Allen Iverson built his game around a legendary desire to win. He was never the tallest or strongest player on the court but he was almost always the fastest. His ability to get the inbounds pass and drive down the court with blazing speed was one of the reasons he became such a legendary player. He was so fast on the court that he almost made the other players around him look slow.

If you watch Iverson run the fast break, you can see how fast he really is.

What made him one of the top 3 fastest players ever in the NBA is that he could run dribbling the ball nearly as fast as he could without it.

That is a skill that not everyone, even really fast athletes, posses. Iverson’s handles were also really fast and his crossover move, arguably one of the best all time, happened so fast, it often left defenders crumpled on the court wondering what happened.

#2 Fastest Player Ever in the NBA – John Wall

He can get from one end of the basketball court to the other in just a few seconds. Think about that for a few seconds. That’s right, in the time it took you to think about it, Wall already made a layup and is headed back on defense.

Not only is he one of the fastest people to ever play, he has great control on the court even at full speed. He can pass, dribble, and pull up for a shot in the blink of an eye, leaving defenders in the dust.

Wall’s elite level speed could make him a star in many sports but on the basketball court is where he truly shines.

Even when he is moving at full blast, he can make great basketball decisions. That is a remarkable skill that showcases speed and smarts that are both above-average abilities, even for an NBA player.

John Wall at full speed on the basketball court moves like a gazelle mixed with a sports car, it’s impressive to watch!

#1 Fastest Player Ever in the NBA – Russell Westbrook

Russell Westbrook has an almost unfair advantage on the basketball court – his speed.

His baseline to baseline speed is nearly a half second faster than the NBA average and he can cover the entire court in 3.36 seconds!

That’s a remarkable stat and one of the keys to his reputation as the fastest player ever in the league. Sometimes it seems like Westbrook is playing against players in high school or college, he’s just that fast.

Another element that makes Westbrook the fastest to ever do it is his explosiveness. He can go from standing still to full speed in just a few steps, which is a huge advantage on the court.

Not only is he fast while running, he can get off of the floor and jump faster than anyone else also. This ridiculous speed and explosiveness has turned Westbrook into a beast on the court in almost every way, as you can see by his amazing ability to get triple-doubles.

Speed is a highly sought after commodity in any sport and the fastest players often excel. In basketball, speed can create many advantages for a player and their teammates. It’s easy to see how really fast players can impact the game by creating shot opportunities or by keeping defenders confused and playing catch up.

Allen Iverson, John Wall, and Russell Westbrook are the fastest players to ever play the game. Their legendary speed is a huge part of their overall game and is a big reason why they are some of the best players to ever step on the court. Without this great speed, they may never have made it to the NBA at all.

Who do you think is the fastest player ever in the NBA? How fast are you?