How Many Fouls to Foul Out in College Basketball? 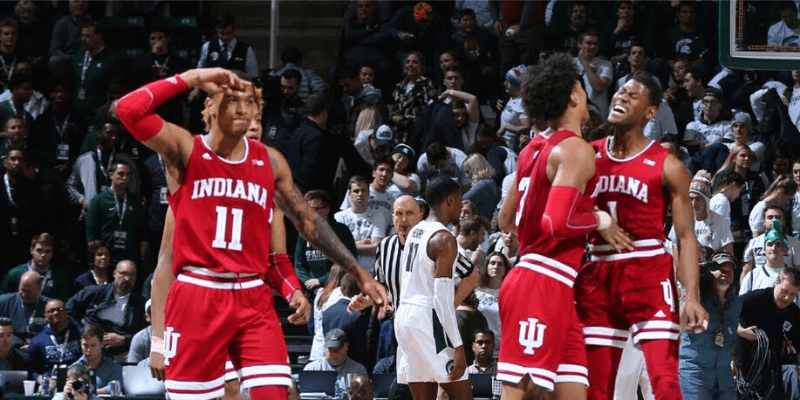 Each foul in a college basketball game is crucial in many different facets of the game. In terms of gameplay, it can mean several things in various scenarios. Some fouls are unintentional due to the physicality of play in games and some are very intentional and serve a purpose for a particular player and their team. Some fouls are agreed upon between the referees and the player called for the infraction and others are disputed heavily by the player.

One thing that is never disputed when it comes to fouls, particularly in the college game, is how many fouls each player is allowed to commit before fouling out of the game. Each college basketball player is allowed five fouls in each game and is sent off the court once they have reached that foul limit.

The NBA allows their players 6 fouls before they foul out, due to a couple of different reasons. One is that the professional game is deemed more physical due to the “professional” nature of the sport. NBA players are pros and their style of play is high level compared to the college game and contact happens more frequently.

Another reason is that NBA games are 48 minutes long compared to the 40-minute college game. The longer the game, the more chances you will foul someone. The average of fouls per minute breaks down to the same – a foul every 8 minutes fouls you out of both the college game (5 fouls in 40 minutes) and an NBA game (6 fouls in 48 minutes).

What is a Foul?

There are several different types of fouls and they can differ tremendously. If you would like a complete breakdown of fouls and their meaning, check out our article about the foul as it pertains to the NBA game here.

There are, however, important things to understand about a foul for this particular article, most importantly, the definition of a common personal foul.

A player shall not hold, displace, push, charge, trip or impede the progress of an opponent by extending arm(s), shoulder(s), hip(s) or knee(s) or by bending his own body into other than a normal position or by using any unreasonably rough tactics.” – 2018-19 NCAA Rulebook: Rule 10 – Fouls and Penalties

The game of basketball is very fast-paced and there are thousands of different situations and scenarios during games, due to how dynamic the game is, that fouls are committed countless times and their reasons are plenty. Let’s discuss some of the reasons why players foul before taking a look at some interesting scenarios from past college games.

Oftentimes players do not mean to foul but have no choice because they are having trouble guarding their opponent and fouling is one way of stopping them from scoring at will. Other times a player gets a little too eager on defense and either reaches in or bumps their opponent trying to steal or block a ball. Another very common incidental foul is when a player jumps over their opponent’s back while grabbing a rebound. It is a judgment call but happens quite often.

Some fouls are one hundred percent meaningful and are committed to either serve a purpose or send a message. Many players, both in college and the pros, made their name by playing hard-nosed defense which included committing hard fouls on their opponents so that they thought twice about driving into the lane. This was an example of a strategic personal foul, that served a purpose and sent a message.

The strategy of having someone on your team that plays an enforcer role is a bit outdated as the game of basketball has evolved so much, however, tough guys will never completely leave the game. The college game is called much closer these days but tough guys can still “put a body” on someone who drives into the lane and have them second-guessing a drive into the lane next time if they get hit hard enough.

Late game situations sometimes call for fouling as well. If a team is down in the late stages of a game and need to foul the other team in hopes they miss foul shots. Fouling a team stops the clock and puts the onus on them to hit big shots under pressure, which is easier said than done. If you look at almost any basketball comeback, there are some elements of fouling a team to try and slow the game down. It may not always be exciting but it can be effective.

Fouls don’t only occur on the defensive side of the ball. The offensive is capable of committing several types of fouls including an incidental offensive foul and an offensive charge. Many times ball-handlers, in order to get an advantage on their defenders, will either push off or extend their arm out and can get called for an offensive foul which results in loss of possession.

A charge occurs when an offensive player either runs or jumps into a defender uncontrolled and the defender keeps his feet and body stationary. The defense has the right to their position and if a player impedes that, it is a charge. The charge is one of the most controversial calls in basketball because of how difficult it is to be called on a regular basis. Each referee is different and even if you take the perfect charge, there is no guarantee that it will be called in your favor.

From 2016 to 2019, Chris Silva of the University of South Carolina committed the most fouls in NCAA basketball history. Over his career, which was 134 total games, he committed 470 fouls! Silva averaged 21.7 minutes per game over his four-year career at South Carolina, which means he averaged a personal foul every 6 minutes of his college career. When you break it down to the minute, the rate at which he committed fouls was pretty staggering.

Silva is also second overall for the single-season personal foul record. Silva committed 141 personal fouls during the 2016-17 season while playing in 37 total games and averaging 20.9 minutes per game. That means Silva averaged almost 4 fouls per game and committed on average every five and a half minutes for the season!

Former Duke University star Shane Battier holds the record for most offensive charges taken with 111. That number is impressive on its own, but to think about the type of player Battier was makes it even more amazing. Shane Battier is a 2-time All-American and former Player of the Year. Those types of players don’t normally excel in the role player work so the fact that Battier not only led his team but the entire country, in charges taken says a lot about his character.

Battier’s pedigree would come in handy once he entered the NBA. Battier went from college superstar to NBA role player and his practice in excelling in the little things – defense, charges taken, diving for loose balls – helped him stick around the league for an impressive thirteen years. During his pro career, he made two All-Defensive teams and won two NBA titles with the Miami Heat.

Fouls are an interesting part of the game of basketball. They can serve a purpose occasionally but oftentimes are unwanted by the teams committing them, and unnecessary within the game. While fouls are a frustrating part of the game for players and fans alike, it is important they are enforced so that the order of the game is maintained.

Who is the most memorable enforcer from your favorite college basketball team throughout history? Let us know below in the comments!