What is a Free Throw in Basketball? 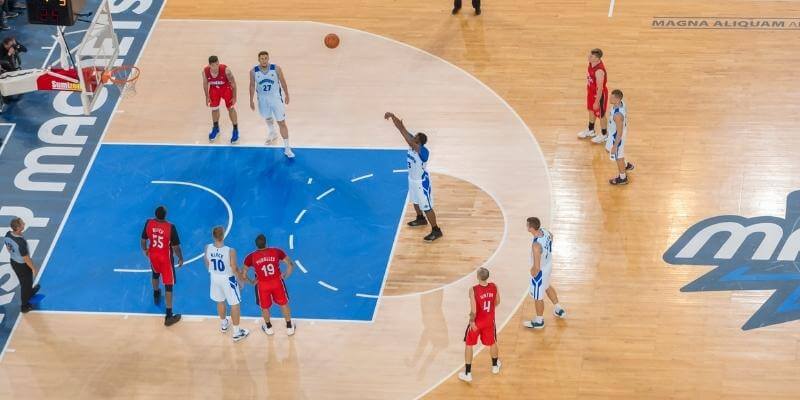 At every level, basketball is a tough, physical game. Players are constantly banging into each other, trying to drive through multiple opponents, and going up for high-flying moves. All of that contact, while normal, does lead to fouls. And fouls lead to free throws.

This article breaks down what a free throw is, why they occur, as well as all of the different types that come up during regular games. Shedding light on the shots will help you better understand basketball as a whole.

A free throw is a special type of shot that’s awarded to a player who gets fouled. They go to the foul (or “free throw”) line, which sits 15 feet from the basket, and shoot either one, two, or three free throws depending on the situation. Every shot the player makes is worth one point.

Rather than being guarded, the shooter lines up with players from both teams on either side of the key and gets to take the shot completely uninterrupted. This makes free throws much easier to make than other types of shots.

If the shooter misses their free throw and it’s not their last one, they get to take another. The ref simply collects the ball and tosses it back to the shooter. If the miss is the player’s last shot, both teams get to go for the rebound as if it was a normal miss. From there, play continues.

How Free Throws Get Awarded

Free throws only happen after fouls, but not all fouls are rewarded the same type of free throws.

You always get what the shot you would have made was worth, unless you get fouled and make the basket. In that case, a single extra free throw shot is awarded to the shooter rather than the typically two or three. That gives them the opportunity for a three or four point play.

Related: What is an “And One” in Basketball?

Another reason a player would shoot a single free throw rather than two or three is in the case of a technical foul. If a team commits a technical, their opposition gets to nominate a shooter to take a single shot. A defensive three seconds call awards the opposing team one free throw too.

When understanding free throws, you also need to understand the bonus. Fouls that aren’t made while shooting don’t lead to free throws. However, that’s not always true. At a certain point in the game they do lead to the foul line through to what’s known as the bonus.

Every team has a certain number of non-shooting fouls to give during a quarter or half. If they go over that limit, every foul they commit (shooting or not) gives the other team free throws.

In the NBA, the bonus typically kicks in after five fouls. Once a team hits that threshold, the other team shoots two shots whenever they get fouled. That includes off the ball fouls and reach-ins.

However, the NBA bonus changes during the last two minutes of regulation or overtime. During crunch time, a team enters the bonus after just committing two fouls. That helps speed up the game and create a more exciting finish.

In college (NCAA), the bonus is a bit different. That’s because the threshold sits at seven fouls rather than give and comes with a different structure. Rather than getting two foul shots for each penalty like the NBA, they shoot what is known as a “one-and-one.”

The player who got fouled gets one free throw. If he makes it, he gets to shoot another. If he misses, he doesn’t get a second one. However, if a college team gets ten or more fouls in a half, the opposing team enters the “double bonus” and gets to shoot two free throws with each foul.

Related: Who is the Best Free-Throw Shooter in the NBA

Many fans may not like it, but free throws are a key part of basketball. They do slow down the game a bit, and they can stack up quickly, but the penalty works to keep the defense honest. In fact, the focus on fouls has allowed for the more dynamic, up-tempo game we see today.

If you aren’t familiar with basketball, tracking fouls can be confusing. As long as you can understand the examples and situations listed in the above paragraphs, you’ll be able to properly know when players shoot their free throw shots, and why they’re shooting them.