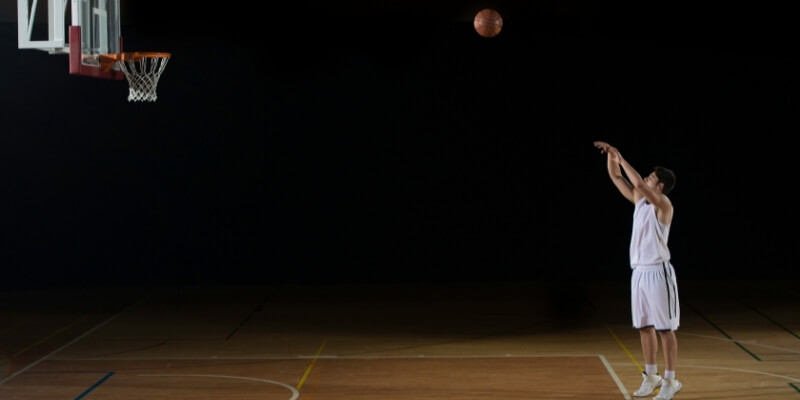 The free throw is one of the most common situations that occurs during a basketball game. Usually, an offensive player goes up for a shot and is fouled by their defender putting them on the charity stripe for a couple of freebies. There are other ways in which foul shots are awarded, but this is the most common.

You notice the terms associated with free throws – like “charity stripe” and even the term “free throw” – depict them as an easy, or not hard, act. During free throws, the player is shooting an unguarded shot from a very manageable distance.

Just how far is that distance? 15 feet, to be exact.

The Art Of The Free Throw

Whenever I think about measurements on the basketball court, like the free throw line, I can’t help but remember the famous scene in the 1986 film Hoosiers. If you call yourself a basketball fan and have never seen it, stop everything (after you finish this article, of course) and watch it immediately!

The film, based loosely on the true story of Indiana high school basketball Cinderella Story the “Milan Miracle”, follows an underdog basketball team through their season. Towards the end of the movie, they are set to play in a massive arena, a far cry from the small high school gyms they are used to.

The team’s coach (played by the legendary actor, Gene Hackman) brings them on the court to measure the foul line distance. When they measure it, it comes out to be fifteen feet, the same distance as it is in their little hometown court. I love the message of the scene, that every foul shot is the same distance away: Fifteen feet.

So, if every free throw is essentially created equal, then why do players’ free throw percentages differ so much? There are a couple of reasons:

Just because everyone shoots free throws from fifteen feet away, it doesn’t mean their techniques are the same. Some players’ shooting techniques are flawed, be it from where they release their shot to how much they use their legs while shooting.

There are a lot of moving pieces when someone attempts a shot and they must be close to perfect in order to make them on a regular basis. When it comes to a skill like shooting, technique is probably the single most important aspect.

While the arc under your shot is a direct result of your technique, it is critical to understand the importance of a high arcing shot.

The rim is 18 inches wide, so improving the angle at which your shot enters the rim will help you make shots more consistently. If your shot isn’t perfect but shoot with a lot of arc your chances of making a shot, even if it hits the rim several times before going in, increase.

It can be an isolating feeling when you step to the foul line and the referee hands you the ball. Sure, no one is guarding you, but every eye is on you until you take your shots.

When you take a shot in a game, there really isn’t much time to think about it like there is during a foul shot. But, the more you think, the more out of the regular flow of the game you are.

Take a look at someone like Giannis, an MVP talent that has trouble shooting from the foul line. He takes so long to shoot, the natural motion of the shot is completely interrupted. This can be a huge problem.

During my playing days, my foul shot routine was simple: three dribbles, set myself, and shoot. No unwanted motion and no time to overthink my shot. Obviously, a lot more goes into the shot than your routine, but if you are loose when you shoot, the odds of your shot going in increase.

Basketball is a physically rigorous sport. If you make it to the foul line while tired and out of breath, there is a good chance that your shot will suffer. Whether you short arm it or don’t bend your knees far enough because of fatigue, the trajectory of your shot will change.

A simple trick if you find yourself at the foul line gasping for air is to take two or three deep breaths in order to regulate your breathing. Fatigue affects everything that you do on the court, and foul shots are difficult when you are tired.

For further reading, you may be interested in this conclusion: Shooting 95% from the free-throw line is almost impossible!

Want to know why? Watch this video to learn more. WIRED’s Robbie Gonzalez steps up to the foul line with top shooter Steve Nash to find out what it would take to get to 95 percent.

NBA Foul Shooting: The Best Ever

Watch any of the best and/or worst foul shooters in NBA history and you will probably notice immediately why they are either good or bad at the skill.

If you are an aspiring hooper, you may want to take some pointers from the best’s foul shooting routine (and block the worst shooter’s routines from your memory bank!)

Let’s take a look at some of the best free-throw shooters in NBA history.

It is no coincidence that the free throw % leaderboard is littered with the best three-point shooters in league history as well.

A lot of shooting comes down to the repetition of a shooting stroke that goes in the hoop time and time again. Repeating the same consistent shooting motion is what has made these shooters so dominant.

With the free throw line distance being measured at fifteen feet for as long as the game of basketball has been around, players have a consistent target to practice from.

However, just because the distance doesn’t change doesn’t mean that you will be successful at shooting free throws without proper practice and repetition.

Many players don’t think practicing free throws is important, but the more points you can add to your team’s final score, the better your chances to win are. So, don’t slack on your free throw practice!

What is your free throw shooting routine? Let us know below in the comments section!