How Much Do G League Players Get Paid 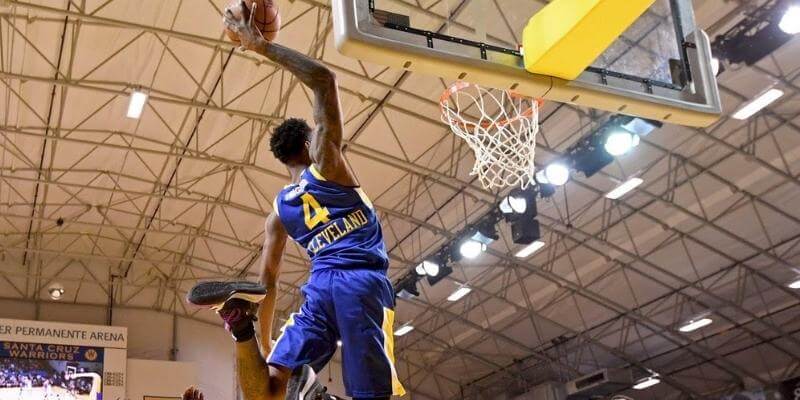 The NBA’s developmental league – the G League as it has been titled since 2017 – has served as a minor league system since 2001.

The NBA G League has risen in popularity in the past few years as it has become a legitimate option for high schoolers who want to skip college. Since the NBA’s One Year Rule prohibits players from jumping to the league immediately, the G League is a great way to get paid to play instead of remaining an “amateur” for a year in college.

But how much do G Leaguers get paid?

On average, a G League player makes around $35,000 per season. Granted, some make a lot more (say hello Jalen Green!), but the median is a very meager number.

Let’s take a look at the G League, why players go there if they aren’t looking at much of a salary, and how G League alum have fared making it to the NBA.

The NBA G League: A History

In 2001, the league began the National Basketball Developmental League – or NBDL – which consisted of eight teams. Those teams were housed in the Southeastern US with franchises in places like Asheville, NC, Huntsville, AL, and Charleston, SC. The league didn’t move the needle and was revamped in 2005 as part of the NBA’s collective bargaining. The league was rebranded as the D-League and tried hard to show the connection between it and the NBA.

Between 2006 and 2009, the trend of partnering the D-League teams with an NBA “parent team” gained steam. The league looked at it more like Triple-A baseball, which built more of a connection to the teams’ fans. By 2015, every D-League team was affiliated with an NBA franchise.

Prior to the 2017-18 season, the D-League entered into an agreement with Gatorade and was renamed the NBA Gatorade League (which was shortened to just the NBA G League). G League games became more accessible through streaming services like Twitch and even ESPN+.

The 2019-20 season started the trend of G League teams offering contracts to high school players not yet eligible for the NBA Draft and the league’s appeal has taken off. The prospect-specific team is called the G League Ignite and offers contracts in the low 6-figures to NBA probables.

You may look at the $35,000 figure and think that is low. With the country’s rising rate of inflation, and knowing how much you may struggle to make a similar amount, it may seem like a silly pursuit. There are also leagues overseas where US players can make seven figures to play.

The business-minded player may jump at the opportunity to make more in a different country. So why is the G League still a viable option? There are a few factors that go into the decision to make 35K to play basketball in the US instead of overseas.

Did you know that the NBA’s league minimum salary for a rookie is $925,000? You could look at the G League as just a job that makes $35,000 or as a stepping stone to brighter pastures. Most professional athletes are highly confident in their abilities and see the G League as the first step towards stardom (or at least a higher-paying gig).

Because every G League team is affiliated with a parent NBA team, these players are easily accessed by the league. NBA teams and their G League affiliates have regular conversations between coaches and scouts. If a player is progressing in the G League, the first people to know about it is inside their own organization.

Right now, the NBA is riddled with players in the COVID health and safety protocols, leading to several call-ups and 10-day contracts for G League players. All it takes is an impressive 3 game stretch by one of these players and the team signs them for the rest of the year.

The NBA G League’s plan of offering pro hopefuls out of high school a contract was a risk. While there isn’t a large sample size the 2021 NBA Draft was a sign of optimism for the G League. Three players were drafted from the G League Ignite squad and a couple are already making big waves.

The 5-star recruit out of high school had offers from big-time college programs – Arizona, and USC to name a few – before entering his sophomore season. He was selected as a McDonald’s All-American his senior year averaging 31 PPG, 7 RPG, and 5 APG. Green passed on college and instead signed a $600,000 contract with the Ignite.

After averaging almost 18 points, Green was chosen by the Houston Rockets second overall. Many doubters were silenced before the season began after watching Green’s NBA Summer League performance. Green scored 23 points in his first contest and went on to make the Summer League second-team.

It only took Green three games to post a 30 point game once the regular season began. The Rockets are in a heavy rebuilding period, giving Jalen the “green light” (no pun intended) to be aggressive on the court. With only about 20 games under his NBA belt, Green is averaging 15 PPG and has shown that his G League move was the right call for him.

Kuminga was seen as a project but, has already shown signs of promise in his rookie season. Like Jalen Green, Kuminga came out of high school as a 5-star recruit with offers to places like Duke and the University of Kentucky. Also like Green, Kuminga signed with the Ignite and shined in the G League instead of on a college campus.

After averaging 15 points for the Ignite, Kuminga was taken by the Golden State Warriors. Kuminga started out slow due to injury but has been coming on strong. He is an athletic freak who can guard anyone on the opposing side of the ball. With the veteran leadership of Klay Thompson, Draymond Green, and Steph Curry, and under the tutelage of Steve Kerr, Kuminga is in a great spot.

Will The New NCAA NIL Rule Affect The G League?

In the Summer of 2021, a bombshell ruling by the NCAA that allows college athletes to profit off of their Name, Image, and Likeness was put into place. This essentially gives amateur athletes a chance to make money while in college.

With this ruling, the idea of a basketball player skipping a year of college in order to make money playing ball may have been scrapped. Once you become a professional in anything, the thing you loved – basketball, in this case – becomes a job. Why wouldn’t an 18-year old decide to attend college, and all of the parties and fun that comes with it, rather than move to Fort Wayne, Indiana and play in front of an empty gym?

One of the biggest appeals of the G League was the money. Now a player can attend a place like Kentucky or North Carolina and be treated like a God on campus. They can play in front of a packed house every night and make money doing it because of the NIL ruling from the NCAA. Only time will tell if the future of the G League will suffer because of the opportunity to make money while being in college.

While a salary for the G League isn’t the same as an NBA contract, it is substantial. Especially if you are a top talent making a pit stop before the big leagues, the G League is a worthy option for you. You are not making LeBron-level money, but you are getting a paycheck to do something you love. And that is priceless.

Do you follow the G League at all? Let us know about a player to watch out for below in the comments!