What Does GB Mean in Basketball? 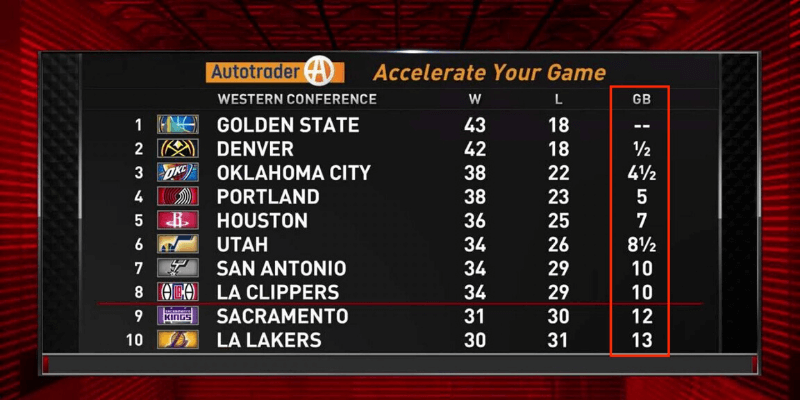 One of the most exciting times of the NBA is at the end of the regular season. This is when the league sets its eyes towards the playoffs and tries to calculate which teams are in, which teams are out, and which teams are still in the hunt based on the number of games each team has won and lost.

Some teams have already comfortably clinched their playoff spot and are waiting for the regular season to end trying their very best to avoid injuries for their most important players. Other teams have a good feeling about getting into the playoffs but are still jockeying for the best possible playoff seed and the chance for home-court advantage in the first round.

GB is an abbreviation for the term games back, or games behind, which is seen when checking the standings either on the internet or newspaper. 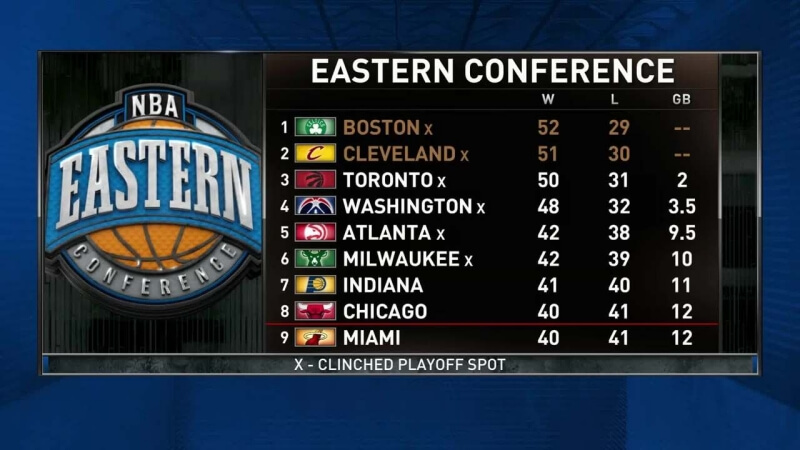 An example of how the term “GB” is used in NBA standings tables.

The above image shows standings for the NBA’s Eastern Conference, with Boston and Cleveland both tied for first place. The rest of the teams within the standings table are vying for a spot among the other six playoff spots – spots three through eight. Each of the NBA’s 30 teams plays 82 games in the regular season which contributes to their win/loss total.

The first column next to the team’s name is labeled “W” which stands for “wins’, meaning how many total wins that team has over one season. The second column, labeled “L” stands for “losses,” meaning the number of losses for that team that season. At the end of the season, each team will have a win/loss total that, added up, equals 82 games.

The third column labeled “GB” is where we figure out how many games back certain teams are from the top of the conference. For example, the Indiana Pacers, who are in seventh place on this list, are 11 games behind the first-place team. Some may get confused that the 11 games behind is behind the next closest team – the sixth-placed Milwaukee Bucs in this case – but that number is always in relation to how games you are away from the top of the conference.

Why Are “Games Behind” Important?

There is no downplaying the importance of the “games behind” statistic to the outcome of your season. While you don’t always have to finish first place in your division, conference, or league in order to win the title, it is the ideal position to being the playoffs. Some leagues, like the NFL and MLB, award their first-place teams first-round byes, or a free pass to the second round, as a small reward for finishing in the first place.

While the NBA doesn’t utilize byes in their playoff system, finishing in first-place is beneficial for a couple of reasons. The first is that you will play the worst seed – the eighth seed in this case – and be heavily favored to beat that team in the first round. You also are guaranteed home-court advantage throughout the playoffs until at least the finals.

“Games behind” are also important to those not in first-place contention but still looking to make the playoffs. While your “gb” number is how many behind the first-place team, you can compare your number to other teams near you in the standings. For example, if you are 4 games behind and another team is 3 games behind, that means you are only 1 game behind them and have a good chance of catching them on your way to a higher playoff seed than them.

The concept of “games behind” within the context of a season is your roadmap to the postseason, but not your crystal ball. Just because you are the top seed doesn’t mean you are guaranteed to make it to the finals or even get out of the first round. It isn’t likely that you will be upset in the first round if you are the one-seed as it has only happened 5 times in NBA history, but those 5 instances mean there is always a chance the lowest seed upsets the highest.

What if Two Teams Tie?

As you can see in the image of the Eastern Conference standings in the article, the Boston Celtics and Cleveland Cavaliers are currently tied in the “games behind” column. In the image, it indicates that both teams have played 81 games so far, with one regular-season game remaining. Let’s say Boston loses and Cleveland wins those final games making their records identical at 52-30. Who gets the top seed in the playoffs? Good question.

In this instance, the tiebreaker of this scenario, according to NBA rules. If two teams in the same conference have identical records, the tiebreakers for playoff seeding goes as follows:

Typically the first layer of the tiebreaker (head-to-head record between the two teams) settles the tie, however, if you have the same record against each other you would move to tiebreaker number two to determine it, and so on until the tie is broken.

“Games behind” or “GB” are very important to the overall success or failure of a team’s season. At the end of the day, “games behind” is probably a more important stat than your actual win/loss total because, as long as you stay in the pack of playoff teams within your conference, it doesn’t matter if you have 45 wins or 65 wins.

As an NBA fan, if your team loses a game they should have easily won by playing complacently, or if they squander a big lead and lose, you may remember those games more than your best regular-season wins. The impact of your team’s win/loss record can’t be downplayed because there are many instances in NBA history where every game counts.

What is your most memorable moment about your favorite team coming back from a large “games behind” hole during a season? Let us know in the comments section!