What is Giannis Antetokounmpo’s Vertical 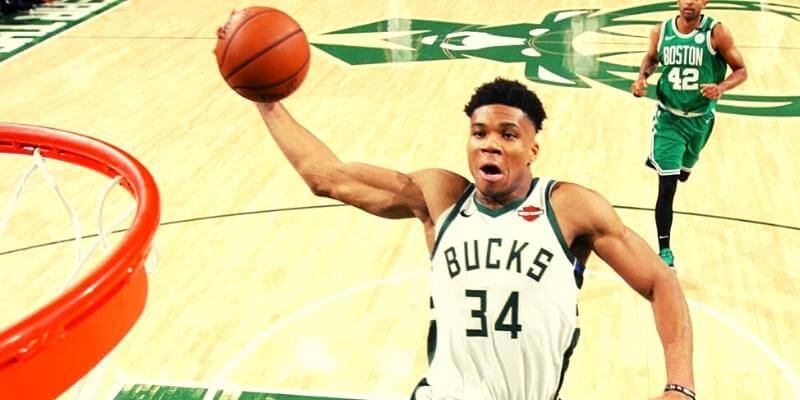 Besides height, vertical jump is perhaps the most important aspect for any NBA player to have. Being able to jump is a critical part of basketball. It helps create more scoring opportunities, and enables better defense. It’s also what makes Giannis Antetokounmpo so special.

This article will analyze the Greek Freak’s athletic abilities by looking at his ability to jump, and then comparing it to the rest of the league. That will shed more light on the athleticism of the NBA, and reveal why an increased vertical is so valuable out on the court.

There are many parts to basketball, but it’s definitely a game for the vertically gifted. Height is a strong advantage on the court. If a player isn’t tall, chances are they can jump. In rare circumstances, they are able to do both. That’s what makes Giannis so special.

While there’s no definitive answer, many state that Giannis’ vertical sits somewhere around 38 inches. That puts him into a rare category. While he just misses the elusive 40-inch mark, that’s more than enough to get him up over the rim when driving down the lane.

Not only does that measurement mean that Giannis can jump above the competition, but it makes him incredibly skilled at blocking shots or going up for rebounds. Any player jumping that high is special. What makes Giannis a true unicorn is how high he can jump with his frame.

The F in Freak

For the most part, the NBA operates on a sliding scale. Smaller players are able to jump high, while taller or heavier players tend to have lower verticals. Giannis completely breaks that. He can fly through the air despite standing 6’11 and weighing a solid 240 pounds.

At those measurements, the Bucks forward almost defies the laws of physics in an unfair way. Being able to match up against him is tough enough without needing to worry about him dunking or simply skying to shoot over an already smaller defender.

That’s why his jumping ability is so key. He’s a huge player who leverages his size, strength, and speed to overpower opponents. His high vertical simply expands on that, providing him even more ways to dominate the competition.

Most NBA players are able to jump well, but there are quite a few large centers or power forwards who can’t get up as high. For that reason, the average NBA vertical sits just below 30 inches. Not terribly impressive, but certainly not short either.

The best leapers can hit 40 or more inches. However, they are all outside players. In fact, the current top 10 verticals in the league (all of which sit north of 40 inches) are from specially gifted point guards or extremely athletic wings.

Taking that into account, it shows why Giannis is such an outlier. His leaping ability is far and away the best for anyone near his size. He’s in the upper percent of all players across the league, and he’s able to do it by pushing past all other big men.

He’s always been an athletic specimen, but his jumping ability sits eight inches above the NBA average. That’s not something that happens every day.

The Greek Freak is one of the biggest players in the NBA. He’s also able to jump extremely well for his size. That ability completely breaks the mold and changes the way most teams think about big men.

He’s not just a tall player with a high vertical, he’s a one-of-a-kind athlete who the league has never seen before and may never see again. Players are getting taller, faster, and stronger. Even so, it’s unlikely will be able to do what Giannis can.