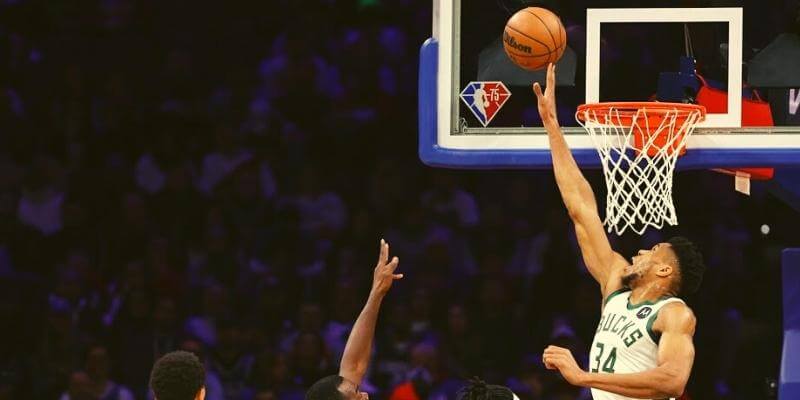 Height and weight are the first two dimensions anyone thinks about when evaluating NBA players. They give a solid idea of size, and reveal a lot about athleticism too. However, they aren’t the only aspect that matters. Organizations put a lot of emphasis on wingspan too.

This article focuses on Giannis Antetokounmpo’s wingspan (which is 7’3, 211 cm) in relation to his other dimensions. Studying those measurements will show, not just how he’s managed to thrive in the NBA, but how long arms impact athleticism and overall skill.

There are many benefits to having a long wingspan in the NBA. The more reach a player has, the better they can operate on both ends of the court. Extra inches enable better rebounding, steals, shots, and blocks. It’s important when it comes to dribbling and scoring too.

For guards, longer arms allow them to match up against bigger defenders. For big men, that length is great when it comes to solid defense or strong post moves. The more space a player can cover with their reach, the more options they have with or without the ball.

A long reach allows players to close gaps or get up tricky shots that players with shorter arms won’t be able to hit. That’s key for Giannis, and it’s something he takes advantage of all the time.

Giannis is one of the most athletically gifted people on Earth. Not only is he fast, but he’s big too. He stands 6’11 and weighs a staggering 240 pounds. In addition, his wingspan stretches all the way out to an impressive 7’3.

That gives him a reach that’s four inches longer than his 6’11 height. That discrepancy isn’t huge, especially when compared to certain wings and guards across the league, but it’s such a great total length that it helps advance just about everything he does on the court.

Most NBA players have (and want) arms that are longer than their height. Giannis doesn’t have an incredibly wide reach compared to his body, but it’s more than enough for him to dribble, shoot, block, and defend in any way that he wants.

Arms that are over seven feet long are going to be a huge advantage in the NBA, regardless of a player’s height. Scoring over Giannis (or trying to stop him coming down the lane) are both almost impossible due to how far out he can hold or dribble the ball.

To understand the importance of Gianni’s wingspan, it’s also key to break down the way he plays the game. He’s a center at heart, but he can do much, much more. Even without a lethal deep shot, he has a ton of agility, speed, and finesse for someone his size.

That’s incredibly important to note because it shows why his wingspan influences his game. For a larger center who doesn’t drive or handle the ball on the outside of the key, the dribbling advantage they get from extra reach won’t matter because they don’t put the ball down.

However, Giannis is no ordinary center. He runs the point quite a lot, always looks to find a good pass, and needs to be shifty. His arms perfectly complement that style, giving him the ability to switch into a wing or guard position when the time comes.

Giannis has one of the longest wingspans in the NBA. He has many attributes that help make him special, and they are all complemented by his arms. His reach gives him a ton of extra options, and enables him to dominate the game in a totally unique way.