What is Giannis Antetokounmpo’s (The Greek Freak) Real Height? 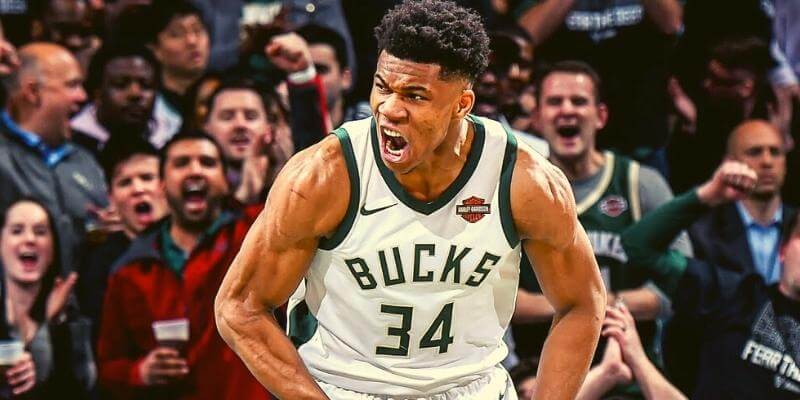 Height is not the most important thing in the NBA, but it certainly matters quite a bit. Every top player stands above a certain level, with plenty of superstars at 6’10 or above. However, as Giannis Antetokounmpo shows, it’s more what you can do with that height that matters.

To shed more light on that, the following paragraphs will break down The Greek Freak’s dimensions and compare them against the rest of the NBA. That will reveal how he manages to set himself apart from the competition, and why his specific measurements are so special.

The Importance of Height

There are many things coaches and teams can teach in the NBA, but height is not one of them. Being a physical specimen is an intangible only few players are able to achieve. That’s not to say that smaller players can’t be good, but being closer to the rim is a big deal.

The more length an athlete has, the more options they have on both offense and defense. They can power through defenders more easily, contest all sorts of shots, fight for both close and long rebounds, and work great for screens or natural picks.

However, that size does come with a disadvantage. Typically, taller players aren’t as quick as smaller ones. They can’t dribble like guards, don’t have the ability to maneuver like wings, and can’t jump like small forwards. That is why Giannis is so special.

Giannis’ measurements are all impressive. He has a 7’3 wingspan, weighs 240 pounds, and stands 6’11. That means, not only is he among the tallest players in the league, but he’s one of the longest and heaviest as well. He has reach, power, and plenty of size.

That package is strong, but it’s not always a blessing. Today’s NBA has a large focus on smaller players that can shoot from outside and stretch the floor. There are many talented big men who simply can’t keep up with that fast pace and get left in the dust. Not Giannis.

The Bucks center is an extremely rare breed in that he has a ton of height and weight, but is able to move much more quickly and do many more things with the ball than other people who stand where he does. He has the power, but isn’t afraid to get fancy too.

Giannis’ height is impressive. Only 33 players in the league stand 6’11, with even less being 7 feet or taller. That puts him on a short list. From there, the list gets even shorter because of how well he’s able to move his body in comparison to other players.

Not only does he have exceptional height, but Giannis can jump 38 inches. His vertical is leagues beyond just about every power forward and center in the NBA He’s also incredibly coordinated and quick for his size.

He’s fast too. Though it’s hard to know how well he can run or what his average speed is, the NBA tracked his top speed of the 2021 Finals to be 15.6 miles per hour. That’s incredibly quick, especially for someone who has to move such a big frame.

A Move to the Mean

Over the last few years, NBA heights have moved towards the middle. Taller players have gotten smaller, while guards have only gotten bigger. In both cases, everyone has increased in both agility and speed. It’s not just enough to be big, they have to be quick too.

Giannis is not the only reason for that trend, but he’s undoubtedly a big influence. He showed many teams what a big man could do, and fought back against the notion that centers could no longer get it done. There was stigma against larger players, but that’s no longer the case.

The center hybrid doesn’t have a lethal outside shot, but he showed that it’s possible to be the whole package. He’s not just an athletic specimen, he has a lot of skills on top of his size. Now, that combination has become much more sought out by organizations everywhere.

Giannis is an extremely tall man, but he’s far from the tallest player in the NBA. There are many centers who dominate the game by clogging up the middle or pulling in plenty of rebounds. None of them are as quick, speedy, or crafty as the Bucks center.

He’s a special blend that’s extremely hard to create. Though he’s one year removed from the Finals, it’s easy to see why he’s had so much success so quickly. Few players can impact the game like he can.