How Many Rings Does Giannis Have? 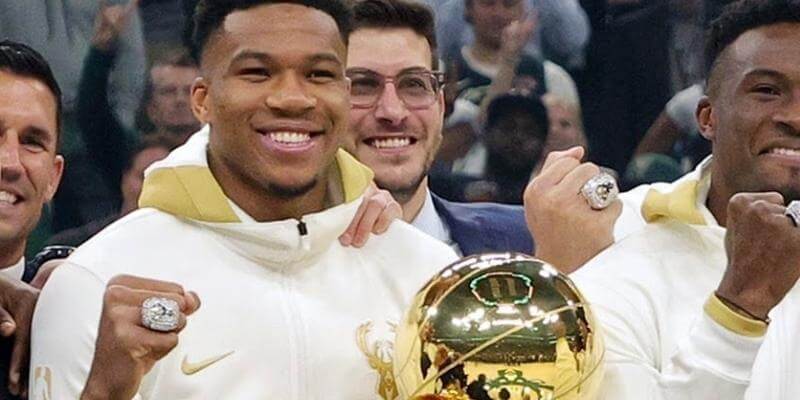 The NBA is a league of legacies. While all sports emphasize championships, no fan base cares more about rings, dynasties, and all-time greats than basketball. Winning a title isn’t just a requirement for any great player, it’s a rite of passage they all must go through.

This guide will look at the number of rings Giannis Antetokounmpo has (which is 1, won in the 2020-21 season), and use that to reflect on his career so far. Such information will show why he’s considered to be a top player, as well as how far someone can fall if they don’t climb all the way to the top.

For as long as the NBA has been around, it’s had a large focus on rings. There have always been dynasties, from the 60’s Celtics to the 2010’s Warriors, and those teams have allowed certain players to gain title after title.

When it comes to greats, there are three championship cut-offs. First, a player has to win one. That legitimizes them as a finisher and shows they can finish what they start. From there, it goes to three rings and then five.

While it’s easy to focus on the bigger numbers, it’s also important to note how much weight a single ring carries. It’s not just a championship, it’s a much bigger achievement that helps immortalize an entire career.

Giannis was a first round pick back in 2013. He had size, power, and almost an unmatched combination of strength and quickness. Many thought he was the complete package, and the Bucks certainly believed him to be the franchise player they’d been waiting for.

For the most part, they were right. The hybrid center rapidly improved during his first three years in the league, and became an all-star quickly after. However, those years, while great for regular season wins, didn’t end with much revelry.

Giannis just couldn’t get a ring. In fact, he couldn’t get out of the first round of the playoffs. He had an incredible first five years in Milwaukee, but his weak supporting cast and a star-studded Eastern Conference kept him from ever making a deep run.

That put a lot of pressure on Giannis. While he continued to thrive and grow with each passing season, the lack of a title hung over his head more and more as time went on. Nobody doubted his talent, but they began to doubt his ability to separate himself from the pack.

Things finally began to change in the late 2010’s. Spurred by Giannis’ talent and a slipping Eastern Conference, the Bucks began to surround their star with talent. They landed some big signings and fully rounded out their already strong roster.

That allowed Giannis to thrive like never before. He took over plenty of games, and got the Bucks to the playoffs during back-to-back MVP seasons.

In 2018-2019 they made it all the way to the Conference Finals before falling to the Raptors. The next year, despite an excellent regular season, they bowed out in the second round to the Heat.

Not to be denied, the team roared back during the 2020-2021 season. Not only did they finish 3rd in the East, but they took advantage of key injuries to take home the NBA championship. That immortalized Giannis in Milwaukee and cemented him as a true all star.

Giannis only has one ring so far in his career, but that’s currently more than enough. Though the Bucks aren’t a dynasty yet, taking home a title was a huge achievement that cemented Giannis as the real deal. He’s one of the best players in the league, and has the jewelry to prove it.