What is Goaltending in Basketball? 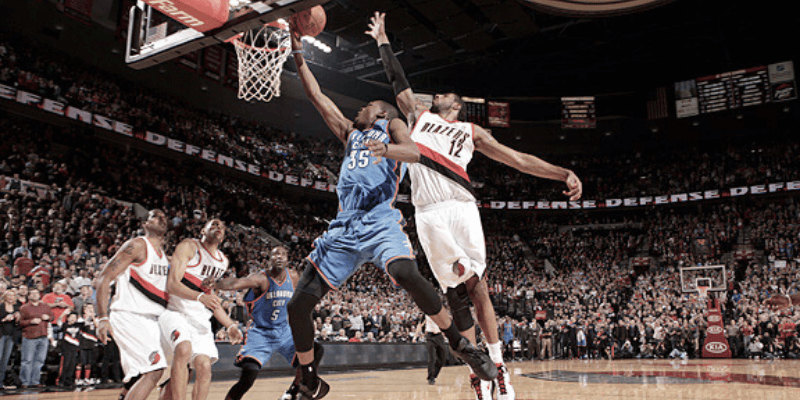 The goaltending violation is not one that you see every game, but it is an important rule to be enforced, particularly in higher levels of the game where athletes have the ability to jump high enough to commit this infraction. You won’t see this called in youth leagues but it will begin to pop up at the high school level. In the college and pro ranks, however, the call becomes more prevalent, even though most players have it ingrained in their heads not to goaltend.

The goaltending violation can hurt your team and is a fairly easy play to avoid, especially among basketball players who are the best in the world at what they do. Although these elite-level athletes are able to violate this rule, it is still not something that takes place often.

If you have seen your fair share of basketball, you have probably witnessed a referee call a goaltend. Maybe the announcers have discussed it too, commenting on how silly of a play it was for the defender to make. You may have a broad understanding of the call, but what exactly is goaltending? What is the penalty for it? And why is this rule so important to the game of basketball?

Goaltending is a violation in which one or more players interfere with the basketball when a field goal attempt is on its way to the basket and is in its downward flight. The shot must be intentional and the ball must have a reasonable chance of going into the basket.

In the NCAA, WNBA, and NBA, goaltending may also be called if the ball is interfered with after a shot that contacts the backboard (a bank shot). This is seen frequently during layups that have already hit the backboard before the defender blocks it (more on that below).

The goaltending infraction is often mixed up with basket interference and we will discuss this confusion a little later in this article.

What is the Penalty for Goaltending?

This infraction can also be called against an offensive player. This call is much harder to determine and is often the cause of controversy, which we will discuss later. In this case, no points are counted and the ball is turned over to the other team.

Why Do We Need the Goaltending Rule?

For many of us who can’t get up above the rim, we will not have to worry about being called for this. But it is possible that someone else can commit this violation against us. This rule gives everyone’s shot a fair chance to go in, taking the advantage away from taller and more athletic players who can get up above the rim.

The rule was first put in place in the NCAA in 1944 and it was then adopted by other leagues. It was thought to have been implemented because of the 6’10” George Mikan who’s height and physical ability allowed him to easily jump up and snatch anyone’s shot out of the air. Before this, the rule had never been thought of since people weren’t as physically imposing and the violation was nearly impossible.

The rule turned out to be a wise move for the sport of basketball. As players such as Wilt Chamberlin and Lew Alcindor began playing, basketball evolved into a sport of taller athletic players who would have had a field day under the basket. This evolution would have been a negative for the game and fans would have lost interest due to the ease at which taller players could block shots frequently.

The main point to remember about goaltending is that the ball must be on its way down or off the backboard after an intended shot that has a chance to go in. These rules can get confusing and even when you look at the official rules at the NBA rulebook, you will see that goaltending is only mentioned in the title “Basket Interference-GoalTending”. It is not specifically mentioned in the text of the rules.

While these rules can get mixed up, the penalty for each is the same so the end result of whichever call is made is inconsequential. Take a look at this video for a demonstration of basket interference.

There is so much confusion out there between goaltending and interference, that all of the videos I found that say they explain goaltending, are actually basket interference. Take a look at this video of “goaltending”. The first one is definitely goaltending, while the second one is interference. See if you can figure out what the proper call is for the rest of them.

These calls can often be the source of dispute. If they occur at the end of the game, they could swing the game’s outcome. One example might be an alley-oop pass that looks like a shot. If the offensive player catches or tips it in, the referee must decide if the intent was a pass or a shot, making the call subjective on the part of the referee.

A similar situation could occur where a player takes a shot that is offline and his teammate tips it in. The referee must then determine whether or not the shot had a “chance” to go in.

It is difficult to determine if and when the ball has started on its downward flight. Thankfully video replay can now be used to confirm or make corrections to close calls. As you can see there is a multitude of situations that arise which can lead to controversial calls. It is also frustrating if the right call isn’t made even with replay capabilities.

In a recent NBA game between the Utah Jazz and Portland Trailblazers, there was controversy at the end of regulation when Trailblazer superstar, Damian Lillard went up for a game-tying layup and was allegedly blocked by Jazz center Rudy Gobert. On second look, however, Gobert actually goaltended the ball as it had already hit the backboard before he “blocked” it.

Goaltending is a violation that most players are able to avoid, but good shot blockers will make the mistake once in a while. While the rule is in place to create a level playing field for everyone and avoid frustrating gameplay that could lose viewership, it is often a source of controversy.

FIBA rules allow some forms of basket interference such as grabbing the ball while it is in the cylinder. Do you think this should be allowed in the NCAA and NBA? We’d love to hear from you, so please leave your comments.