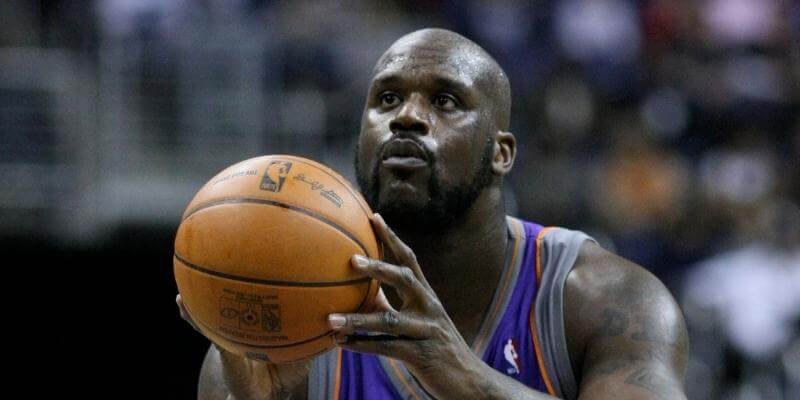 In the NBA, it plays to be big. The league has always been about being tall, but height isn’t always enough. You need to have some heft as well. Being too heavy might be a hindrance, but having speed and strength to back up size goes a long, long way.

This article breaks down the largest players to ever step onto the hardwood. I will analyze how much they weighed, their individual achievements, as well as whether or not the extra size helped or hurt them on the court.

While not as high profile as the other players on this list (and while he was barely in the league) Garth Joseph still cracks the top 10 heaviest players to ever play in the NBA.

Coming in at 315 pounds, Joseph was a 7 foot 2 center who had one of the shortest stints of anyone you’ll ever see. He played a mere four games during the 2000-2001 season. Two of those were for the Raptors and two were for the Nuggets.

Though his career wasn’t long, he still managed to play overseas for quite some time. He played for Greece, China, Iran, France, as well as the Dominica National Team. He is also one of the only players from Dominica to reach the NBA.

Anyone with the nickname “Tractor” had to be a big player, and Robert Taylor definitely fit that bill. Even so, he was highly touted coming out of high school and even played in the Mcdonald’s All-American game.

The 315-pounder, first drafted by the Mavericks with the sixth overall pick in 1998, was quickly traded to the Bucks for then unknown Dirk Nowitzki.

While Dallas definitely got the better end of the deal, Traylor did stick around the NBA for seven years. He was a solid big man who put up decent stats when he first came into the league. That did start to go downhill a bit as the years went on, but he contributed everywhere he went.

Unfortunately, his weight did catch up to him eventually. In 2011, the ex-player had a fatal heart attack during his stint with the Vaqueros de Bayamon squad in Puerto Rico.

Another large player, Kevin Duckworth was a 7-foot tall center from Illinois who weighed 320 pounds. However, he knew how to use his large frame better than most. While some heavy players only lasted a few years, he was in the NBA from 1986 until 1997.

During his 11 year stint he played with the Portland Trail Blazers (who drafted him) and finished with the Los Angeles Clippers. Though his height and size proved to be an advantage for him in his younger years, it became a bit of an issue as time went on.

Duckworth bounced around with a few different teams during the twilight of his career, as he could never properly get his weight under control. He still played here and there, but the back half of his time in the league was a shell compared to what he did when he first came up.

Priest Lauderdale was another large player who’s size proved to be a detriment more than an advantage. Though he could move decently well considering his 325-pound frame, the 7 foot 4 center never had the ability to keep up with the rapidly shifting league.

He played college at Central State University. Despite his low profile, the Hawks took a shot on him in the 1996-1997 season, hoping his large wingspan and strong defensive abilities would help him serve as a stand-in for Dikembe Mutombo.

However, that never panned out in the way the organization hoped. Lauderdale didn’t have the IQ or the speed needed to last in the NBA. He ended up just playing 39 games for his career, and only averaged 8.8 minutes a game.

Like Lauderdale, Thomas Hamilton was a bigger player who’s size held him back from being a true NBA athlete. At 330 pounds, the 7 foot 2 center was a force in the paint when he wanted to be. He played good defense and could keep people away from the rim.

Unfortunately, injuries derailed his entire basketball career. He had a slew of issues with his weight in college, which led teams to avoid him in the draft. The Celtics did pick him up during the 1995-1996 season, but he didn’t pan out in the way they hoped.

Hamilton only saw play for 11 games that year. After that, he left the NBA entirely for three seasons to get in better shape. He returned during the 1999-2000 season with the Rockets, but injuries kept him off the court. He only lasts 22 games before being released.

Michael “Sweets” Sweetney, despite his nickname, was not someone who started out heavy. In fact, he was quite lean for his size during his stint at Georgetown, where he played well enough to become a Naismith College Player of the Year finalist.

Such accolades got him drafted by the Knicks, but he failed to live up to their expectations. After just two years with the team, he was sent to Chicago. There, his weight began to climb.

Sweetney got bigger each season, causing the Bulls to eventually cut him. He would never make it back to the NBA. He bounced around a few training camps, even going as far as performing tryouts with the Celtics, but couldn’t climb back up the mountain.

Perhaps one of the most well-known undrafted players ever, Sim Bhullar was the first player of Indian descent to make it to the NBA. At 350 pounds, the big man was absolutely massive and did a great job of dominating those that were smaller than him.

Unfortunately, he didn’t quite have the size to match up against other NBA big men night after night. He made a splash in 2014 when he signed with the Kings Summer League squad, but was quickly waived before the season started.

From there, he went down to the King’s G-League affiliate the Reno Bighorns. Against lower competition, he thrived. He recorded some triple doubles, had a ton of blocks, and played well enough to eventually earn a 10-day contract. Ultimately, however, that didn’t work out either.

Many of the biggest NBA players never got a true shot because of their size. Eddy Curry was not one of them. The big man, who weighed 350 pounds at his peak, went straight to the NBA after high school. Not only that, but he was the fourth overall pick in 2001.

Despite his success, a heart condition caused the Bulls to trade him to the Knicks. He thrived in New York, playing well and eventually earning a six-year, $60 million contract. He stayed in the league for 11 long seasons and even got a ring with the Heat in 2012.

While his increasing weight kept him off the court during his last few years, he has dropped more than 100 pounds and now works for Miami’s internal organization.

When people think of big NBA players, Shaq is often the first that comes to mind. And for good reason. The Diesel was always huge, reaching 360 pounds at his heaviest, and played like no one before or after.

He was dominant, a hall of famer, and one of the best players to ever step onto the court. Unlike other big men, he took over right away thanks to an incredible mix of speed, strength, and size that almost no one could match.

When the Magic took him in 1992, he weighed 294 pounds. He steadily put on more and more muscle, eventually reaching 341 pounds during the Lakers 3-peat in the early 2000’s.

While his 360-pound weight came after his prime ended, it was still enough to make him the second heaviest player ever to step into an NBA game.

While it’s hard to imagine anyone larger than Shaq, Oliver Miller managed to out-diesel the Diesel. At a whopping 375 pounds, Miller is easily the largest NBA player of all time. Like Shaq, he didn’t start out at that size. It came over time.

Known as “The Big O,” Miller came into the league at a lean 270-pounds. During his 11-year stint in the NBA, that number rose and rose until it reached 375. At that weight, he couldn’t keep up. He bounced around to a few organizations before eventually falling off the map.

He did make a comeback a few years later, and even managed to play for the Harlem Globetrotters for a brief amount of time. Though his added weight did not do him any favors, it put him in the record books.

Being tall in the NBA is important, but it’s even better when you have some size to back it up. While players never want to be extremely overweight or obese, extra muscle or fat can help when it comes to defense, blocks, or rebounds.

Not all of the heaviest players had extremely successful careers, and the ones that did weren’t always big, but they do show that power is not always a bad thing.