How Much Does a High School Basketball Referee Make? 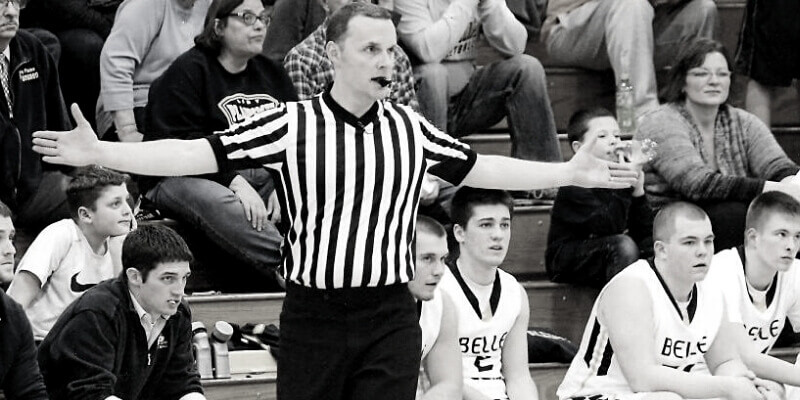 Being a referee is largely a thankless job. Not only are you bound to make mistakes from time to time, but it’s tough to keep up with live play. You’re also going to get yelled at by both players and fans. That gets even tougher when you’re trying to work at the high school level.

I am a basketball fan who has nearly three decades of experience both watching and playing the game. My own knowledge of the sport, backed up by extensive research of referees, allowed me to properly cover each and every section outlined below.

Here, I will look at the average salary of high school basketball referees, as well as how much those at higher levels get paid. I will then take those salaries and compare them to similar sports in order to discuss, not just income, but where refs fit into basketball as a whole.

Before getting into anything else, we must first answer the question at hand: how much do high school basketball referees make? Truth is, it depends. Unlike other jobs where you have a fixed salary, pay differs for high school refs depending on where they are and their officiating level.

For instance, in San Diego, California referees get around $67 a game. That’s pretty solid for a part-time gig, and it can go up with experience. However, in Santa Cruz, California, the spread is a much wider (and much less stable) $30 to $63 per game based on your level.

The lowest high school referee salary in America is in Louisiana, where referees get just an average of $31 per game. Mississippi is the next lowest, paying out their refs around $40 on average.

In addition to those fluctuations, there’s also the issue of different pay at different levels. While some referees get the same throughout their county, many schools will have higher dollar amounts for varsity referees as opposed to those working with JV or freshman games.

That gap isn’t typically huge, but even ten or so dollars a game can really start to add up over the course of an entire season.

To look at high school salaries in context, you need to study how much refs make at all levels. At the end of the day, it’s more of a fun side hustle than a steady job. The money can add up, but it’s never going to supplement a real income. That’s not true of college and NBA refs.

Those who officiate Division 3 games, the lowest level you can ref in college, make roughly $135 per game. That then goes way up to $700 a game for the ones working in Division 1. Not only that, but they also receive accommodations, which high school referees do not get.

Of course, that then extends even further in the NBA. Those referees, working with the top athletes on a national stage, easily make six figures a season. In fact, the highest paid ones get about $400,000 or more a year.

Looking at the above numbers, it’s easy to see why most high school refs do it for a general love of basketball and the game rather than as a pure job. In some places, it can get to that level, but those are rare fringe cases rather than the norm.

What Do Other High School Referees Make?

For even more context on basketball referees, it’s also important to look at the two other popular high school sports (football and baseball) and see what they make.

As with basketball, officiators and umpires get different pay depending on their own personal history as well as what level they’re referring. However, looking at general numbers, the pay does fluctuate compared to basketball quite a bit.

For example, high school football officials can earn as low as $40 a game, to as much as $200.  They can get paid for travel as well. Umpires, on the other hand, can earn anywhere between $60 and $90, with the ceiling going a bit higher if they’re working with traveling teams.

That shows that, no matter how you cut it, being a high school basketball referee is definitely the toughest job in the entire bunch.

Here are some questions you might have about the topic, which I’ll answer briefly below.

Is Referring a Full-Time Job?

Though the position doesn’t pay enough at lower levels to act as a true income, it can definitely be a full-time job for those who do it at the college or professional level.

Which Basketball Referee Makes the Most Money?

Any of the top NBA refs, including Finals officials like James Capers, are the sport’s top earners. They typically pull in mid six figures a year for their work with the league.

Where Do High School Referees Make the Most?

No state pays more to high school referees than California. Even with the discrepancies between counties, those in the Golden State make more on average than anywhere else.

How Do You Become a High School Ref?

To become a certified referee you need to go through an official approval process. That includes having a high school diploma and then passing a written test to show you have deep knowledge and understanding of the sport.

Being a high school basketball referee is far from lucrative. It can also lead to working odd hours and cause you to travel long distances without much reward. As such, those that do it simply do it because they enjoy being around or involved with the sport.

There’s nothing wrong with loving the game, nor is there anything wrong with earning some extra money doing so. It can also serve as a stepping stone to greater opportunities down the line. You have to put up with a lot, but for some, that’s part of the journey.