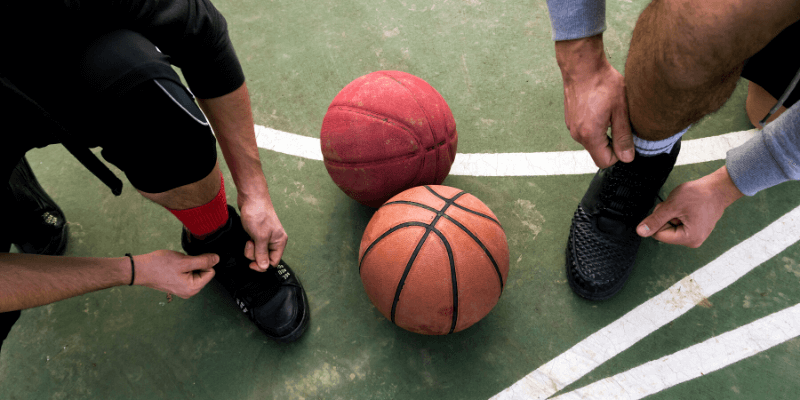 Shoes are a key part of basketball. They not only protect your feet on the hardwood, but they also help you play at the top of your game.

However, there are so many types and kinds out on the market it can be difficult to figure out which ones you want. Some people need lighter brands, while some players prefer solid footwear with extra protection.

This guide will analyze the differences between high top and low top shoes in order to help you find the best footwear for your style.

Wings and guards, for instance, typically want to cut a lot. That quick movement, along with the sharp angles, is incredibly time-dependent. Being one step too early or one step too late can be the difference between a missed shot and an easy layup.

As such, those players typically want to go with low top options. The lighter shoe gives them the ability to run as fast as they can without sacrificing quality or general performance.

In contrast, post players, such as forwards and centers, tend to gravitate towards high top shoes. Cutting is not a key part of their game, which means they can put more focus on foot protection.

Power players also put a lot of strain on their feet. That is where high top’s extra padding comes in.

Each shoe style comes with its own advantages and disadvantages, but the position you play is a good place to start your analysis.

High top shoes are strong sneakers. Though typically heavy, there are some lighter models that do exist for people who want the best of both worlds.

What separates the style from lower top footwear is, as you might imagine, the fact that they have a bit of extra material that goes up to the ankle. That offers added protection to the top of the foot, making them a good choice for people who want to cut down on potential breaks or sprains.

In addition, high tops also lace up much higher than other styles. That extra stability gives you support sleeker shoes do not provide.

Though there is no surefire way to prevent injuries, high tops are a good place to start. They make a great choice for people with weak ankles, or for players who often find themselves rolling their feet during games.

High tops also come with more cushion as a way to cut down on issues like blisters and plantar fasciitis. Not only do they have extra padding, but they tend to be wider than low top footwear as well.

That may not seem like a big deal at first, but it can be a boon for players who have a lot of foot-related injuries while balling out on the court. Even a small blister can sideline you for an entire game. If that is a common occurrence, it may be a good idea to give high-tops a try.

Another added benefit to the styles is that, due to their tougher construction, they tend to last longer than low tops. No basketball shoe will stick around forever, but there’s nothing wrong with getting a few more weeks from your footwear.

The Benefits of Low Tops

Low top shoes may not have the built-in injury protection of high tops, but they have their own pros the bulkier shoes cannot match.

Besides allowing for better mobility, which is their main draw, they are simply much lighter on your feet. That helps you run at greater speeds and doesn’t hold you back when you jump.

In addition, the lighter shoes make it so you take longer to get tired out. No matter how strong you are, fatigue can set in during important moments of the game. It always helps to have a few extra bursts of energy when things come down to the wire.

The additional speed afforded by low tops is a great bonus for all players of all sizes. In a game where speed is so important, getting one or two extra steps on a defender is sometimes all you need to make a basket you would normally miss.

Low tops have a quicker response time than high-tops. That is one of the style’s subtler benefits, but in a game of inches it matter.

When wearing high tops your jump or cut time might be slightly delayed because it takes an extra beat for your shoe to react with the asphalt or hardwood. By cutting down on that spring, even if just by a second or two, it gives you a slight edge over other players.

You will always get great performance out of high-quality kicks. Even so, that doesn’t mean they will all help you play to your strengths. Low tops are not just about a modern look or less weight, they are about giving you that one extra inch you wouldn’t get with mid or high tops.

Two Sides of the Same Coin

At the end of the day, your shoe comes down to personal preference. Low tops give guards an edge while jumping and running, while low tops helps big men cut down on injuries.

Even so, that doesn’t mean you are locked into one type just because of where you play. Both shoe types look and feel different, which means it is always important to try both out before making your final decision.

Do you have a favorite style? If so, why do you prefer it over the other? Let us know in the comments below!