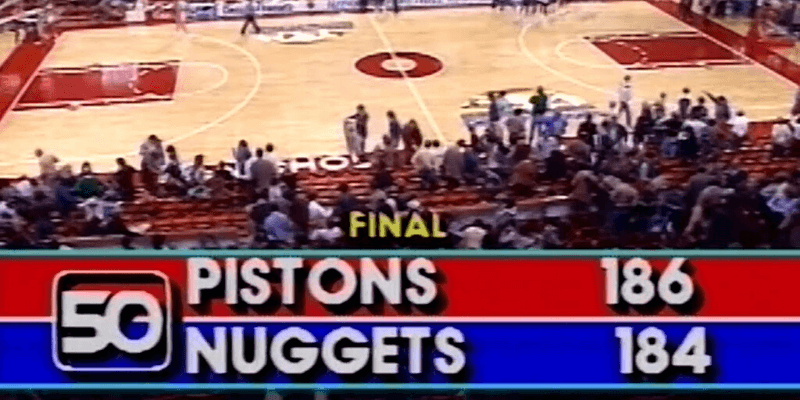 It is always exciting to watch a couple of high-powered offenses go up against each other, pushing the ball up the floor for incredible dunks and lots of 3-pointers. These are the types of plays that fans pay to see.

The average NBA scores have been trending upward over the past few years due to the style of play and the many talented scorers that are now in the league. Although score totals have been increasing, it may be surprising to know that we have to go all the way back to 1983 to find the highest-scoring NBA game ever.

The highest-scoring NBA game ever was on December 13, 1983. In this game, the Detroit Pistons defeated the Denver Nuggets with a score of 186-184 in a triple-overtime. The total points between both teams were 370.

Basketball is an incredibly exciting sport for several reasons. Above all else, is the scoring. Most games get into the triple digits for both teams, which means a lot of fancy layups, long threes, and high-flying dunks. In today’s league, teams and players score more than ever before.

Even so, there have been a few games in the league’s history that stand out above the rest. This guide looks at all of them, explaining when they occurred, why they happened, and how such extremely exciting contests occurred in the first place.

There have been many high-scoring games throughout NBA’s long history, but none of them eclipsed a truly insane contest between the Detroit Pistons and Denver Nuggets during the 1983 season. After a flurry of overtimes, the game ended 186-184 in the Pistons favor.

Though today’s league is known for baskets, that total score (370) has not been eclipsed, or even close to eclipsed, in the thirty plus years since it happened. One team getting to 180 is extremely difficult. Two is even more absurd.

As an added bonus, the game is in the record books because both teams hold the titles for the most and second most points ever scored for an individual team as well. No team in any game has managed to score more than 180 points in a single game. There, they did it twice.

Four players scored 40 or more points in the game, with Nuggets player Kiki VanDeWeghe putting up 51. There wasn’t a lot of defense being played during the game, and everyone seemed to get in on the action. That led to record breaking basketball.

Coming in second is another game from basketball’s past. While not quite as spectacular as the above game, both the Spurs and Bucks managed to eclipse 165 points during the 1982 season. In this game, the Spurs won by notching 171 points to the Bucks still-impressive 166.

As with the Nuggets game, this contest was a three overtime affair with a ton of scoring happening on both ends of the court. George Gervin hit 50 during the game, while two other players (Mike Mitchell and Brian Winters) both got over 40.

There were not a ton of strong individual performances, but everyone got involved and scored in one way or another. One player put up 31, while a few got 20 or more. With enough time, those extra performances started to add up.

The game, taking place on March 6th, was the highest scoring game of all time for just one year before the Nuggets and Pistons broke it the next season. Even so, it remains as only the fifth time in NBA history where one team got more than 170 points.

While not quite as impressive as the above two, the Bulls and Hawks found their way into the record books in 2019. During a regular season contest on March 1st, both teams broke 160 points (168 to 161) to notch the third highest scoring game of all time.

While nobody got fifty points, Trae Young notched 49. On the other side, Zach Lavine scored 47, Otto Porter Jr. scored 31, and Lauri Markkanen got 31. Like the Spurs and Bucks, this contest reached a high final score through a lot of smaller efforts rather than a few large ones.

It also stands out because both teams did not do well that year. It set, and still holds, the record for the most regular season losses by two teams who scored more than a combined 316 points in a single game. That’s a huge anomaly, and a night where everyone brought their a-game.

While regular season games can get out of control, Finals matches tend to be much tighter. The defense is tighter, the stakes are higher, and the world is watching. That leads to more hustle, less open shots, and more contested baskets.

That is why you have to go all the way back to 1967 to find the highest scoring Finals game in NBA history. It occurred on April 14th of that year between the Philadelphia 76ers and the then San Francisco Warriors. The Sixers won the contest 141 to 135.

In the game, Rick Barry scored 37 points and five other players broke 20. There was a single overtime, which allowed the already inflated score (for the time) to become even more inflated.

Going off the above games, that total score (276) is nowhere near the top of the highest scoring regular season games. It shows how hard it is to get a high number of points when everyone on both teams is trying as hard as they can. Championship games are simply on a different level.

The fact that this record has stood for more than 50 years with such a low score relative to other games is a testament to that.

If you’re curious about other high-scoring NBA games, this is a quick list that breaks down who played in them, when they happened, and the total number of points.

The following section answers any additional big questions you might have about other high scoring games throughout NBA history.

What’s the Highest Scoring NBA Playoff Game of All Time?

Though some regular season NBA games ended up with a higher total, no postseason game broke the 304 scored by the Trail Blazers and Suns on May 11, 1992. The final score (153-151) reflected a tight game that went into double overtime. It’s record hasn’t been touched since.

What was the Highest Scoring Game in the NBA 2020-21 Season?

What was the Highest Scoring Game in the NBA 2021-22 Season?

High scoring games in the NBA are pretty common these days as the current style of play and the skills of the players create so many scoring opportunities. These games are always fun to watch. The game between the Denver Nuggets and the Detroit Pistons back in 1983 must have been really exciting to watch especially if you were lucky enough to see it in person.

The game is a classic that will always be remembered in NBA history. While scoring trends are up in the NBA, this game poses the question, will we ever see the 370 point record from the highest-scoring NBA game be broken?

In basketball, scoring is key. Good defense can be fun to watch, but nothing gets a crowd going like an incredibly deep three or a massive dunk. All of the games in this article had plenty of scoring. So much so that they are forever immortalized in NBA lore.

If you’re someone interested in NBA history, records are always interesting. While it’s been decades since anyone came close to the highest scoring games, the surplus of outside shooting in the league might change that very, very soon.

Do you think we will ever see an NBA game with a higher point total? Will a team ever score more than 186 points in a game? We’d love to hear from you, so please leave your comments.