How to Play HORSE in Basketball 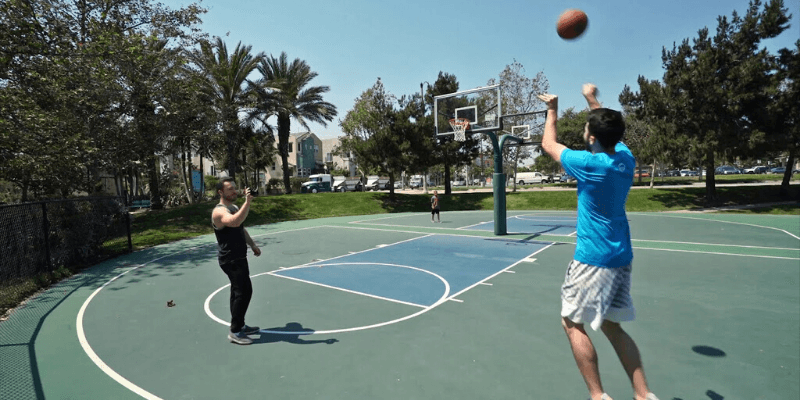 If you have been around the game of basketball for any amount of time, then you have probably heard about the game of HORSE. If you haven’t, no worries, we’ll explain the game here, talk a little about why it is so popular and talk about some of the many variations of the game.

Playing an intense game of basketball is great and there is nothing like it, but sometimes it’s fun to just slow down and play a more relaxed, fun game like HORSE. It can be a great game for warming up before a game, cooling down after a tough practice, or just for fun anytime you have a hoop and a ball.

The game of HORSE can be played by any number of players and involves someone making a shot and the other players trying to make the same exact shot. Shots may consist of normal or trick shots, but the most important thing is that you explain your shot before shooting so everyone knows what they need to do if you make yours. If you miss a shot made by the person before you then you get a letter from the word “HORSE”. Once you have all 5 letters you are out of the game.

HORSE is great for working on your shooting and attempting trick shots that you would never try in a basketball game. It is often known as a game of “one-upmanship”, or let’s see who can do the most outrageous trick shot, but it can also just be simple layups, free throws, mid-range or long shots. A game of HORSE utilizing only traditional shots can be a very effective tool in improving your shot-making ability.

Let’s cover the basic rules of the game as well as some of the many add-ons and variations of the rules.

Aside from playing an actual game of basketball, HORSE is probably my favorite game to play. Growing up, I can remember playing countless games of HORSE with my father and my friends. For some reason, the game has always been very relaxing for me. It could be the slow-paced nature or maybe it is the ability to add your own creativity into basketball. I think it is also because the game really does not need to be taken seriously, it is just pure fun.

Whether it is trying to hit long shots from crazy places on the court, or coming up with some wild move and then laying the ball in, HORSE is probably the most creative game you can play in basketball. I remember trying to make shots from out in the yard or on the other side of the house. From behind the basket or bouncing it off the ground, the shots you can come up with are almost limitless.

Playing HORSE also always reminds me of that great Super Bowl commercial from 1993 with Larry Bird and Michael Jordan. They don’t really call it HORSE in the commercial, but that is basically what they are playing. If you have never seen it or want to watch it again, check it out. This game between Bird and Jordan is a great way to explain the game of HORSE.

The Base Rules of HORSE

HORSE can be a very simple game, but there can also be many variations of the game and add-on rules that you may choose to use or even come up with yourself. Because it can be played in many different ways, let’s start by just going over the base rules of the game.

As mentioned above, there are many rules that can be added or modified. The important thing is that you have a set of rules when you start and go by those same rules throughout the game. Let’s take a look at some of the popular modifications and add-ons to the rules.

Below are some of the popular variations, modifications, and add-ons to the basic rules of HORSE.

PIG is a variation of the game where you use the word PIG instead of the word HORSE. This makes the game quicker and can be great if you have many players or very young players. Really, you can use any word you would like for the game.

Depending on the skill level and physical abilities of the players, it can be very common to put restrictions on the type of shots that can be taken. For example, if all of the players do not have the ability to dunk due to height or jumping ability, you might have a restriction specifying “no dunking” (like Larry Bird had with Michael Jordan in the commercial above).

This is one of my favorite add on rules of the game. If a player misses a shot, any other player can try to tip the missed ball into the basket. Their feet must be off the ground during the tip-in. If the tip-in is successful, the player who shot the ball receives a letter. This gives the possibility of a player getting two letters during one shot if they miss a shot made by the previous shooter. Players who already have all the letters (HORSE) can continue to tip missed shots.

As an add-on rule to Tip HORSE, you may also subtract a letter from the person who successfully completed the tip-in. This can allow players to get back into the game after they have been eliminated because they can go from HORSE to HORS.

There are many other add-on rules that can be used such as if all players make the shot, the original shooter gets a letter. This helps prevent shooters from taking easy shots such as lay-ups. The adaptations and modifications to the game are probably endless but that is part of what makes it such a great game. You can be creative and adapt the game to whatever suits you and the other players best.

HORSE is a great relaxing and fun basketball game that can often be used to show off your skills and be as creative as you want. All you really need to play the game is two or more players, a basketball and a hoop. Make sure to set the rules the way that works best for your group of players, then go out there and just have fun.

What is the craziest trick shot you have ever made or seen? We’d love to hear from you, so please leave your comments.