How Long is The NBA Season? 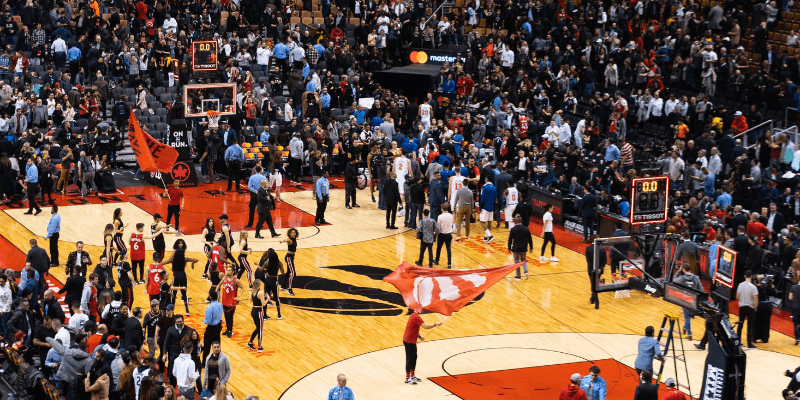 While the NBA has seen several iterations of their league schedule, the current format is that all teams play an 82-game season from late October through early April. This gives each team an equal amount of home and away games – 41 apiece – during the season.

While the 82-game schedule has been the status quo since the 1967-68 season, there are questions as to why the league decided on the number 82 and how much sense that number makes in the current league.

In 1967-68 the NBA was a 12-team league and teams played their conference rivals 8 times each and all non-conference teams 7 times. That all made sense in 1967, but in 2019 with the league ballooning to 30 teams, there is a good reason to explore other options.

So, what is behind the modern NBA schedule’s 82-game season? Let’s take a deeper look.

“That’s just the way we’ve always done it” can explain a lot of our decision-making, or decision-keeping, process in the modern day. Tradition can be a great thing in the right context but can hinder outside the box thinking and possible improvements in both quality of play and player health.

The money factor should be number one, as it is the biggest reason behind everything in professional sports. Broadcast stations, team owners, arena owners, and even players, can thank the 82-game season for the amount of money and revenue they make throughout the year.

Each time the Los Angeles Lakers, for example, plays a game they are making money off food and beverage sales, merchandise sales, and broadcasting sales, to name a few.

If the league were to subtract games from the schedule, as they are discussing in more seriousness than ever before, each team’s, and the entities surrounding them, the bottom line could suffer.

These are the two main reasons behind the league keeping with the 82-game schedule. There have been discussions as recent as this summer, during a league meeting at the NBA’s Summer League tournament in Las Vegas, about modifying the structure of the league schedule in order to shorten the season by several games. A large section of players and media members have lobbied for a shortened season for some time and their arguments are valid. Let’s explore some of those:

The simple fact of the matter is that the more games you play, the more wear and tear your body will take, leaving you more tired and susceptible to injury. Last year Paul George co-led the league in minutes averaged per game at 36.9 minutes. Let’s take a look at that breakdown assuming he played the entire season of an 82-game schedule as opposed to a 75-game schedule, which is being proposed by some as an alternative.

That’s around 300 minutes of gameplay that could theoretically be taken off George’s workload per season. This could factor into players playing longer and possibly better.

There are several different factors that could tie into this potential positive of a shortened season. First off, and probably most simply, if players play less they are less tired and will play better throughout the season.

Also, if players play less they get hurt less, which keeps the top superstars on the court more often than on the bench with injury.

A recent trend among league coaches is the idea of “load management” which is the practice of strictly monitoring top players’ workload and strategically sitting them for long stretches of game time, or keeping them out of whole games altogether.

If a season is shortened there is less reason to manage a players’ playing time, which will keep them on the floor more often. Ultimately, if the best players are on the court more, the gameplay, which is already at the highest level in league history, will continue to improve.

While shortening the NBA’s 82-game season is only in the discussions, the idea that the league is revisiting the topic is encouraging with fans of a season with fewer games.

Ultimately, money tends to win out in these situations, but the league has also been bucking tradition slightly, leading to some outside of the box thinking in regards to plans on making the lost revenue up to the players, owners, and arenas.

A mid-season tournament to determine some playoff teams at the end of the year has been kicked around a bit. Think the NBA’s mini version of the NCAA Basketball Tournament, and who doesn’t love March Madness!? This argument isn’t going away any time soon and it will be interesting to monitor its evolution and eventual decision by the league.