How Many Games Do You Have to Win in the NBA Finals? 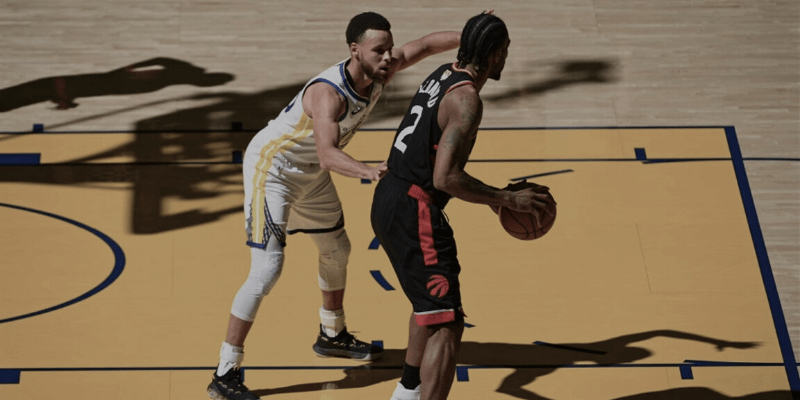 For a professional basketball player, winning the NBA Finals is the pinnacle of the sport and separates you from the rest of the league if you are great enough to win it all.

Most people can tell you after each NBA season who is the champion of the league but some may not be able to tell you exactly how they became champion. How many games did they have to win in order to be crowned champ?

This article will break down the NBA playoff system for you and, more importantly, how many games a team has to win in the NBA Finals.

The NBA is broken down into 2 divisions – the Western Conference and the Eastern Conference. 8 teams from each conference make up the beginning of the playoffs which starts with 16 total teams from the NBA. The first round is a best-of-seven game series.

Up until 2003, the first round was a best-of-five series which led to some pretty big upsets in the past. The most notable two were in 1994 when the 8-seed Denver Nuggets knocked off the top-seeded Seattle Supersonics and in 1999 when the 8-seed New York Knicks beat the 1-seed Miami Heat. The Knicks would go all the way to the NBA Finals that year and ultimately lose to the San Antonio Spurs.

The second round is also a best-of-seven game series with the winners of each series advancing to their respective conference finals. The winners of the Conference Finals face off in the NBA Finals for a shot at the Larry O’Brien trophy and being named NBA Champions. So, what does the NBA Finals structure look like? Let’s dig a bit deeper about the history of the league’s ultimate finale.

The Finals have been a best-of-seven game series since the league changed its named to the National Basketball Association for the 1951 season. A team must win 4 out of 7 games in order to become champion. Even though they schedule 7 games, they will only play enough games that see a team win 4 games. In fact, out of the 73 Finals played, only 19 of them have gone 7 games.

Even though it has always been a 7 game series, there have been some key changes in the structure of the game schedule throughout the years.

From 1950 through the 1985 season the league structured the Finals in a way that saw the first 4 games of the series split between each team.

The team with the best record between the two would have what is called “home court advantage” and would host the first two games in their home arena. They would then travel to the lower-seeded team’s arena for games 3 and 4.

In 1985 the league was looking for ways to improve and one of the things they decided to change was the formatting of the Finals games. They thought it would ease the wear and tear of cross country flights on the players’ bodies and help improve the quality of the games being played.

In this structure, the team with the best record would host games 1 and 2, travel to the lower-seeded team’s arena for games 3-5 and then host games 6 and 7 if those were necessary.

The old formatting structure was restored in 2014. The thinking was that with modern technology and the luxurious way the teams travel in the modern era, there is no need to take cross country travel into account. The game schedule is also spread out giving the teams an extra day of rest between NBA Finals games.

The NBA Finals is one of the most exciting sporting events held each calendar year, and something that I look forward to with bated breath at the end of each NBA season.

March Madness, college basketball’s season-ending tournament is a frantic whirlwind of a marathon across 3 weeks where upsets are guaranteed and you sometimes never know what to expect.

I definitely enjoy that tournament as well, but there is something more deliberate about the NBA Finals. Two teams play each other up to 7 games and it can turn into either a knockdown drag out or a chess match (or both) between the two teams. This format, to me, is every bit of exciting, and intriguing as the NCAA Tournament and I wouldn’t want to have my NBA Champion crowned any other way.

What do you think about the NBA Playoffs/Finals structure? Do you like the 2-2-1-1-1 method or the 2-3-2 method? Let us know below in the comments!