How Many Threes Has Ben Simmons Made? 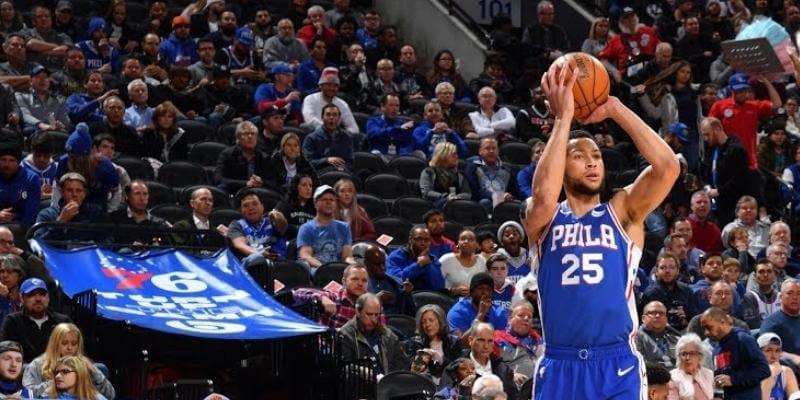 Ben Simmons is one of the most interesting players in the NBA. While he’s seen as a true superstar guard with a ton of power and a high skill ceiling, he also can’t shoot outside the arc. That’s a big issue in today’s league, which continues to be dominated by three point teams.

Though Simmons can’t shoot, he’s still a valuable asset. I’ll look at why that is below by breaking down how many threes the Nets point guard has made, the reason he’s shot so little, as well as how he gets around not being able to stretch the floor.

The Australian is known for not being able to hit from long range. His first two seasons he never even attempted a three, while in the past three he only attempted a 34. Even worse is that he only made five of the thirty four he shot.

Making five three pointers as a guard in today’s NBA is incredibly low. In fact, it’s so low that it’s almost unbelievable. Simmons is not someone who likes to shoot threes. Even so, with 34 attempts, only five made gives him a paltry shooting percentage of 14.7.

At that number, he’s well below every other guard in the league by a long shot. His inside shooting is quite impressive (over 50 percent) but once he moves further out he can’t get anywhere close to that number.

There’s no doubt that Simmons has a block when it comes to shooting three pointers. Missing a lot is one thing, but not even being able to attempt them is another. Nobody is sure why he can’t pull up from long range. However, it certainly needs to be addressed moving forward.

Simmons is a high-profile player who has made a name for himself through a combination of smart play, high basketball IQ, and incredible driving skills. Despite that, defenses are adapting to him more and more due to the fact that they can sag off.

If he wants to be taken more seriously, or if he wants to become a more well-rounded player, he needs to develop an outside shot. That’s not something that comes easily, but it’s something he can do given all of his other talent.

How He Stacks Up

To look at Simmons shooting woes and put them in perspective, it’s important to analyze the rest of the league. As a whole, point guards shoot 35 percent from three on average. That number includes Simmons’ extremely low percentage.

Looking at that number, it’s clear he’s way below everyone else in the league. Even given his low amount of shots per season, Simmons is a long way from where he needs to be. His passing and driving have compensated for that so far, but it won’t stay that way forever.

Simmons may not be a knock down three shooter, but there’s more than one way to get the ball into the basket. His physicality is almost unmatched, as is his ability to see the court. Both of those lead to an over reliance on drives and an underelience on threes.

Even so, there’s no doubt that his long range shots could use some help. The point guard says he plays to improve his range, and he has shot more threes each season, but it’s hard to know if that will come to fruition. Only time will tell.