How Does The NBA Draft Lottery Work? 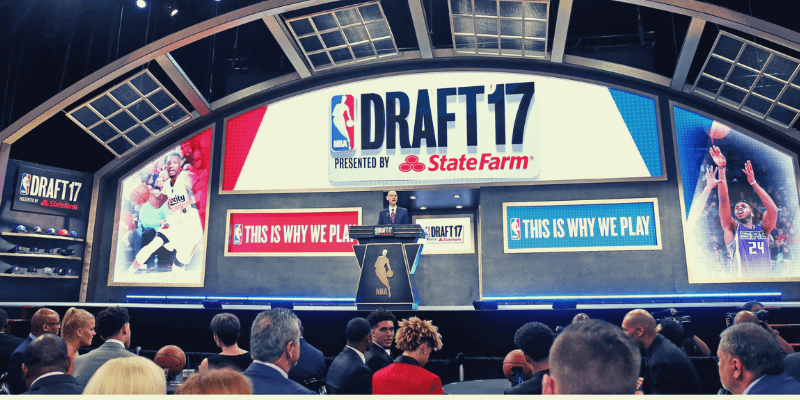 As an NBA fan, if your favorite team has a bad year, there isn’t much to look forward to. One of your most exciting events of the season probably doesn’t even include a game, or any of the players on the team, for that matter. If you root for a bad NBA team, the biggest night of the year, the symbol of your team’s potential future, is the NBA’s Lottery and Draft.

Many fans watch the Draft but may have no idea what the Lottery is and how the league determines it. Why is one team more deserving of the #1 pick more than the others? Why do they devote another entire night on the Lottery order instead of just telling the viewers at the beginning of the draft? These are all good questions that novice fans may be wondering. Strap in, and I will cover all of these topics, and more, explaining how the Draft Lottery works.

What Is The Lottery?

The NBA Draft Lottery is the method that the NBA uses to determine the draft order for the first 14 picks and usually consists of all of the teams that didn’t make the playoffs. It is a way to create a competitive league by giving the worst teams a chance to snag a franchise player in the Draft and, hopefully, turn their team’s fortunes around.

The Draft doesn’t always garner the results a team is hoping for and there are countless misses in Draft history. Some teams, however, have transformed their franchise trajectory when a generational talent fell into their laps.

The Bulls changed their destiny with one selection on that fateful day in 1984 when they selected Michael Jordan. They got lucky that the GOAT fell three spots after the Rockets selected Hakeem Olajuwon first (understandable) and the Trailblazers picked Sam Bowie second (not so understandable). They were obviously excited at the time they drafted Jordan but no one would have predicted the next fifteen-year run.

During the “Jordan Years” the Bulls never missed the playoffs and won six NBA Titles in two separate three-peats (1991-1993 & 1996-1998), a feat no team has ever accomplished. Jordan became the biggest sports figure since Babe Ruth, created a global following and helped Nike become the athletic juggernaut that it still is today with his Air Jordan sneaker. The Bulls drafting Jordan is the absolute best-case scenario for a team making the most of the Draft Lottery.

Tim Duncan joined superstar big man David Robinson and they became San Antonio’s version of the Twin Towers. In his first year with the team, Duncan won Rookie of the Year and was selected as All NBA First Team. It only took two seasons for the Spurs to win a title with Duncan when they beat the Knicks in a strike-shortened 1999 season. The Spurs became a dynasty with Duncan as their leader, winning titles in 1999, 2003, 2005, 2007, and 2014.

Duncan would play 19 seasons, all for the Spurs, and be heralded as not only one of the best players ever, but a Hall of Fame teammate and winner. He will also be a first-ballot Hall of Famer when the time comes.

A History Of The Lottery

Until 1984, the league didn’t rely on the Lottery to determine their draft order, simply using every team’s win-loss record. The broader version of the NBA’s “Modern Era” is considered to have begun when they began the Draft Lottery because of the growth and popularity of the league and the installation of the Lottery for team building purposes. Let’s take a look at the Lottery and Draft order from the beginning.

The early days of the league dealt with a much smaller landscape, with and doesn’t come close to resembling any newer version of the league. The league was known as the Basketball Association of America (BAA) and consisted of only eleven teams. Most of the league landed in the Northeastern region of the country, with one team in Toronto and the furthest team west then was located in St. Louis.

In order to gain more local fans, the league had a territorial pick where the teams could pick players from regional colleges as another vested interest for the fans. If a team chose a territorial pick, they would forfeit their 1st round draft pick. During the early days, they determined the draft order by win-loss record only, so the team with the worst record would have the first pick.

The order of the Lottery changed slightly beginning in 1966 when the league decided to give the 2 worst teams in each division a chance for the first pick by having a coin flip between the two. Whomever won would have the first pick and the loser would have to settle for pick number 2.

In 1985, the NBA was experiencing a golden era with the emergence of teams like the Celtics, Lakers, Pistons, and 76ers, and young stars like Larry Bird and Magic Johnson saving the almost dead league. While popularity was skyrocketing, their Lottery system needed some revamping.

The league felt that teams were “tanking” in order to get higher draft picks; they had just witnessed the Houston Rockets select Ralph Sampson and Hakeem Olajuwon in successive Drafts. In 1985, the league decided to randomly select the draft order by selecting envelopes of every non-playoff team to determine the first 14 picks. After those were awarded, the playoff teams would fill out the rest of the round based on win-loss record.

The NBA thought they had eradicated foul play with this method but still couldn’t allude controversy in the 1985 Draft when many thought they rigged the Draft Lottery so that the New York Knicks could get the first pick and draft powerhouse center Patrick Ewing. This method was used for another four years until 1990.

Since 1990, the NBA has used a weighted Lottery to determine the selection order. The weighted approach gave the team with the worst record the best chance to get the number one pick via ping pong balls. The worst team, however, was not guaranteed the top pick but were given the most ping pong balls (11 out of the 66 balls) for better odds.

Of course, no method is perfect and this one was no different. The most famous result was in 1993 when the Orlando Magic, who had a 1.5% chance of getting the first pick, won the Lottery and selected Hall of Famer Shaquille O’Neal. While they never won a title with Shaq, this showed the potential for a team only a couple of pieces away from success to steal a #1 pick and change their luck in one night.

The NBA Draft and Lottery are two very fascinating events in a league with an already exciting on-court product. Every year, teams put a lot of hope into getting better through their draft picks and that starts with the Lottery to determine their draft spot. Fans wait on the edge of their seat to see who their team gets and hopes that player can change their franchise for the best. Sometimes you get lucky and get a Michael Jordan, and other years, you get Sam Bowie.

What has been the most exciting Draft year for your favorite team? Let us know below in the comments!