How to Be Good at Basketball? 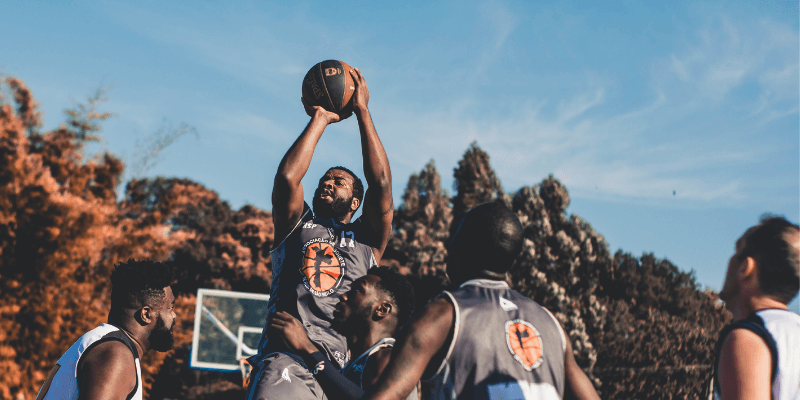 At one point or another, all of us basketball fans have dreamt about being gifted enough to have played in the NBA, or at least the college level. As a former D3 player, I have been fortunate to have achieved a little success over my career albeit relatively minimal. Skill levels aside, getting better at basketball can be very specific to the person playing, however, there are basic skills that one must have to be good at basketball.

I am going to dissect the skills necessary to become great at the game and break down some ways to improve your skills in the long run.

Unlike baseball where you must complete an almost impossible act like hitting a ball traveling upwards of 100 mph, or hockey where being a great ice skater is necessary, you can maximize your basketball talent with the littlest amount of skill. Of course, skills are super important and we are going to cover a few benchmark skills that separate good and bad ballers. I have also added one drill where you can improve your skills in each category. Take a look!

Defense is one way in which an “athlete” can dominate a “basketball player” based on sheer speed and strength. If a player isn’t very skilled at more skillful aspects of the game – shooting and dribbling come to mind – they can up their defensive ability and still be a valuable player for their team. Defense disrupts the other team and forces them out of their gameplan. It is usually never glamorous but the phrase “defense wins championships” is popular for a reason.

Many players have let their defensive abilities carry themselves all the way to the Basketball Hall of Fame. Yes, Dennis Rodman was an amazing rebounder but was also a defensive stopper during his time with the Detroit Pistons. The Hall of Famer only averaged 7 PPG over his career. Bill Russell won an amazing 11 NBA titles by rebounding and shutting down one of the greatest scorers of all time in Wilt Chamberlain to become great. He only averaged 15 PPG.

Defense can be broken down into three key components: footwork, strength and quickness, and a lot of hard work. Not only is taking the ball away from your opponent by either blocking or stealing the ball a big part of it, but the ability to stay in between them and the basket without committing a foul is the most crucial part. This video shows three awesome drills to help you become the defensive stopper for your team.

Considering the way basketball is played today, shooting is arguably the single most important skill to becoming good at basketball. Even if you are a terrible defender and don’t bring much else to the table, if you can hit a three-pointer, you are a dangerous player on the court and will earn respect from your opponents.

Current Golden State Warriors coach Steve Kerr can attest to the importance of shooting. He played over nine hundred games and averaged only one rebound and one assist per game, but shot 45% from the three-point line and was always respected as a great shooter. One of his most famous shots won the Michael Jordan-led Chicago Bulls to victory in the 1997 NBA Finals and was assisted by none other than the GOAT Jordan himself.

Becoming a great shooter takes hours of practice and thousands of shots, but the beauty is that almost anyone can improve at the skill. Whether you are a beginner in need of something to help guide you or a veteran looking to get back to basics, this video is a great place to start. It will equip you with the proper fundamentals of the shot so you can learn from the ground up. It may seem basic to some but is extremely fundamental and can help you correct bad habits.

The term “ball-handling” is easily misunderstood, even from basketball’s seasoned vets. Many immediately think dribbling exclusively when they hear the term, but ball-handling is so much more. Yes, dribbling is a big part of ball-handling but skills like passing and catching are other key components. Let’s start with the most popular skill in dribbling.

For great dribblers, the basketball is almost an extension of their hands when they are on the court. Players like Kyrie Irving, arguably the best dribbler in the league currently, can dribble the ball in almost any setting, be it speeding up the court on a fast break looking for the next play or in traffic between several players trying to either find the open man or an opening for a shot of their own.

What I liked about the above video of Kyrie’s ball-handling highlights is how much passing was also involved. Passing and catching seem like two basic ideas within the flow of the game, but if you don’t focus on them in practice, you could slip up during games and lead your team in turnovers real quick. Making the right pass away from the hands of the defense and being able to catch a bullet pass in traffic are two quick ways to be a good basketball player.

There are countless drills to improve your dribbling online. This video shows three stationary drills to better your handle without a defender and are great drills to master for any skill level. The perk of dribbling drills is that you don’t need a basketball hoop to improve. Just you and your desire to get better at the game.

This last skill category we will cover is a bit higher level than the basics but is imperative to go from good to great as a hooper. Play-making isn’t always measured in numbers like shooting percentage or rebound numbers but the ability to make a play is how to separate yourself from the competition.

Play-makers aren’t always scorers but they can be. These are the players that are always around the ball and when you think about positive plays on the basketball court, these play makers tend to pop in your head first. This can be driving the basketball into the lane and making the defense converge in order to find the open man, or a player who tips the ball to a teammate to begin a fast break. Whatever the play is, it gets fans off their feet and cheering.

Gordon Hayward of the Celtics is a really good example of a playmaker in the league today. Before Hayward’s horrific leg injury the first game of the 2017 season, he was a star on the Utah Jazz and the epitome of a playmaker, with the luxury of getting to the lane anytime to either throw down a dunk or find the open man.

There isn’t one skill or aspect of basketball you should focus on to be good but a number of different ones. One of the best compliments you can get as a player is that you are a “complete player” meaning that you are good at a lot. Working on the four skills we covered in this piece, and the accompanying drills will ensure that you are a respectable player. If you love the game and continue to work hard, you will elevate your game to high levels.

What is one skill from your game that you feel needs the most work? Let us know below!