How to Dribble a Basketball 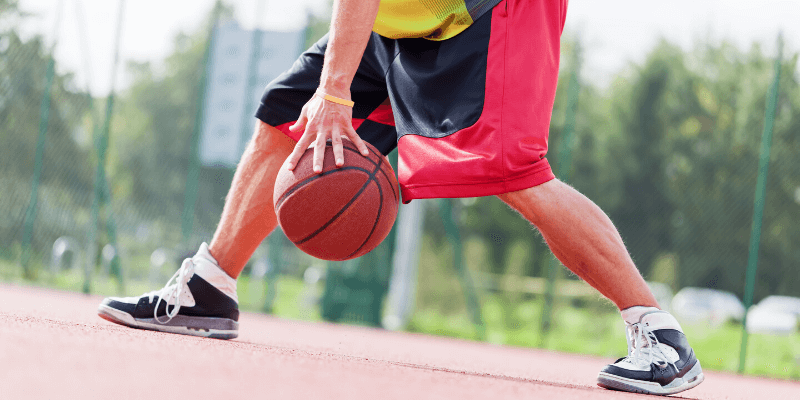 Dribbling the ball well in basketball is the one true skill that can separate you from the rest of the competition. The ability to handle the ball in a way that renders the defense helpless can affect the flow of a game and put you in control.

Those new to the game may need a brief definition of what exactly dribbling is in the game of basketball. It is the act of bouncing the basketball up and down as you move down the court in order to avoid traveling. Even though some players on basketball teams may handle the ball more than others, dribbling is a skill that will be used by every basketball player to some degree.

Let’s take a look at some drills and techniques to help you learn how to dribble a basketball. Once you have these down, you just need to put forth the effort to become a great dribbler.

If you watch someone dribbling the ball really well, it doesn’t look too hard to master. The secret is that dribbling really isn’t a hard skill to learn, with the proper technique and hundreds (maybe thousands) of hours of practice anyone can learn to dribble.

So what are those proper techniques?

Having a low center of gravity helps with dribbling in many ways. You are in a stable position to run while dribbling and are able to endure physical defenders and keep the ball. It also helps with our second step on technique, which is to make sure to keep the ball as low as you are.

A general rule of thumb while dribbling the ball is to keep the height of the bounce between your knee and waist and never dribble it higher than your belt line. The lower the ball, combined with your body also being low, the more difficult for the defender to steal the ball from you.

3. Keep Your Head Up

This step will take some time to master. Dribbling with your eyes up and not on the ball is hard initially, especially during a game. But once you are able to both dribble and survey the court, you are in a much better position offensively. Maybe a teammate is open for a basket, or maybe you are open for a jump shot if your defender is not guarding you closely. There are a number of situations that you may not be aware of on the basketball court if you don’t have your head up while dribbling.

The ball should rarely ever touch the palm or heel of your hand while dribbling. Using your fingertips, instead of your palm, can give you more control over the ball. If you were to use your palm your technique would look more like you are slapping at the ball instead of bouncing it and receiving it with your fingers and a softer touch.

Once you have mastered how to dribble the ball you are going to want to make sure you bounce the ball hard to the ground. In your dribbling motion, your arm will extend and your wrist should snap forward while your fingertips push the ball to the ground. Bouncing the ball hard ensures the most efficient motion and gives you a better chance of the ball bouncing with enough speed to return to your fingers each time.

While this drill may seem too easy, it is used in practice and drills at all levels of play, including in the NBA. While they use the drill as more of a warmup, it is highly effective at the beginner level due to the repetitive nature of the drill.

For the Stationary Dribble (also called “Pounding”) drill, you will bend down in a low athletic stance and quite literally pound the ball to the ground as hard as you can. Remember to keep the ball between your knees and waist when you are dribbling. This drill is great for your muscle memory and also gets you very acquainted with the act of dribbling at a basic level. You can switch hands for this drill and “POund” with both your left and right hand to practice with both.

The crossover is one of the most effective moves in basketball if done right. It is a change of direction move, like the between the legs or behind the back move, where you dribble hard in one direction and then plant your foot, dribble the ball across your body to your other hand, and quickly change the direction of your move.

A great starter drill for the crossover is a stationary move where you get into an athletic stance and continuously cross the ball over for a period of time. Once you get the hang of it, compete with yourself: count how many crossovers you can do in one minute and try setting a new high score every day.

Now that you have gotten the hang of dribbling in a stationary position, let’s add some moving with our dribbles. This drill will involve approximately 100 feet of straightaway distance, preferably the length of a basketball court.

You will start in one corner of the basketball court and begin to dribble diagonally up the court until a certain point, usually marked with a cone or chair, and then make a change of direction move back towards the sideline of the court. You can start with crossovers at the cone or chair and work your way up to changing direction between your legs or behind your back in the drill. The video linked in the title does a great job of showing the full scope of the drill.

Best Dribblers in the NBA Today

There are so many talented ball-handlers playing in the NBA, which makes it tough to pick out only a few. However, the two I chose are on another planet in terms of their ball-handling and may all go down in history as some of the most talented dribbers ever.

Harden is one of the top scorers in the league each year and the main reason is because of how talented a dribbler he is. His moves are all very complex and he uses several moves in a row during most of his attempts to get to the basket. He is a deadly outside shooter too making defenders have to guard his jumper which helps his chances of blowing by them for a layup.

Irving can get by his defender and to the basket literally almost every time he touches the ball. He is known around the NBA as one of the best finishers meaning he can get to the rim, and once he does he usually always finds a way to put the ball in the hoop.

Irving looks like he has the basketball on a string on the court and has put together an impressive highlight reel of his dribble moves that should be studied by any player wanting to become great at dribbling the basketball.

Learning to dribble well can be tedious and involves doing the same task over and over again for hours before you can become great. However, the best players understand the importance of dribbling and work on it relentlessly.

Who are some of your favorite ball-handlers in the NBA today? Drop us some names in the comments section!