How to Dunk a Basketball 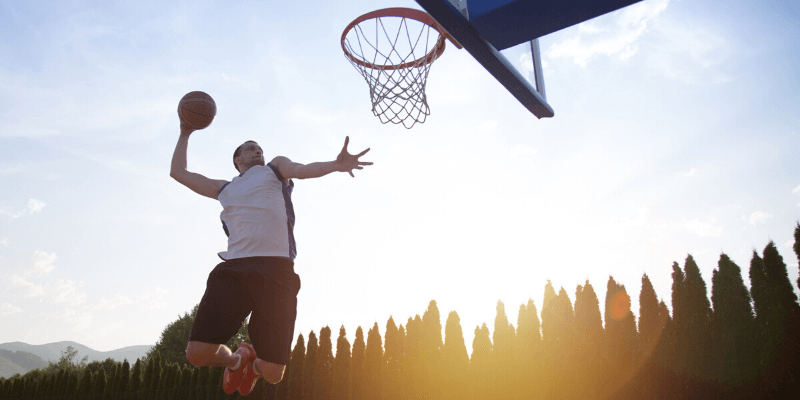 Imagine you are watching a basketball game and a player has a wide-open breakaway. Chances are the most exciting play in this scenario is a rim-rocking dunk that brings the entire crowd to their feet while simultaneously crushing the spirit of the opposing team and their fans. Yes, I know a dunk gets a team the same two points that a layup gets you but a dunk is worth more than just the two points that it is worth.

As a basketball player or fan of the sport, dunking the ball is one of the most impressive feats of the game. Only a small fraction of people on earth can dunk a basketball and once you get to the point that you are easily getting above the rim, you are a part of that select club. It’s also really cool to dunk a basketball. Even if you can dunk something smaller, like a tennis ball, you have to show all of your friends. Just look at this video and tell me dunks aren’t the best.

As a person who played basketball through college, I was fairly proud of my playing career and fulfilled a lot of the goals I set for myself. The one thing I never was able to do, at least not on a regulation hoop, was dunk a basketball.

This article will take a look at the history behind the dunk, go into some ways in which you can learn to dunk a basketball and some steps you can take towards ensuring you reach your goal of dunking.

The Dunk: A History

One of the first documented dunks happened in 1936, at Madison Square Garden by Joe Fortenberry. The name “dunk” came from an article written about Fortenberry’s feat in the New York Times as they wrote that the shot looked “…much like a cafeteria customer dunking a roll in coffee.” It was initially called a “dunk shot” before famed Los Angeles Lakers announcer Chick Hearn started calling it a “slam dunk” during Lakers broadcasts.

While the dunk is seen as an impressive feat now, it wasn’t always the case. In the ‘40s many players, probably the ones who couldn’t pull off a dunk, thought of the shot as an affront and showboating. The shot was even banned in college basketball from 1967 to 1976 as a way to even the playing field. But the sheer joy and excitement that the dunk brought fans and players alike won out (thank goodness!) and the dunk became an attraction in itself.

In 1976, the NBA’s closest competitors, the American Basketball Association (ABA) created the Dunk Competition which opened the doors for the move to become more creative. Players tried fancy gimmick dunks that may not have been pulled off in regular games to the amazement of the fans. This was also where Julius “Dr. J” Erving completed his famous foul-line dunk that was then duplicated by Michael Jordan.

Since then, the dunk has evolved into one of the most exciting plays in sports.

The Key to Dunking a Basketball: The Vertical Leap

Your vertical leap is essentially how high you can jump, which is obviously imperative to dunking a basketball. The higher you jump, the easier it is for you to dunk which helps you to learn different dunks if you are confident in your vertical abilities and are bored with the traditional one or two-handed flush.

We covered some highly effective resources and methods in which you can vastly improve your vertical leap and I suggest you check those out for all of the details. We also went deep into ways to measure your vertical leap as well so that you can calculate the distance you have to cover, through training, in order to reach the height necessary for you to dunk.

How to Dunk a Basketball

Unlike learning how to throw a bounce pass or dribble between your legs, dunking requires athleticism, making it impossible for everyone to do. I mentioned earlier that I have never dunked on a regulation-sized basketball hoop, which is ten feet tall, but that doesn’t mean I have never dunked. You can always lower the hoop you are playing on and follow the below steps on how to dunk a basketball.

In fact, I urge everyone who can’t dunk on a ten-foot hoop to do so, because dunking a basketball is one of the best feelings ever! Let’s take a look at the steps in the dunking process:

Some people are fortunate enough to be able to dunk from a stationary position, and you may be able to work your way up to that, but most people need a running start to build momentum before jumping to dunk. Give yourself enough distance before you take off.

Make some sort of mark on the surface that you are attempting to dunk from as to where you should be jumping. This will alleviate any guesswork on where to jump from during your running start. A simple method is to put a piece of tape (make an “x”) on the spot.

Chances are you will not be dunking a basketball on your first attempt. But that doesn’t mean you won’t be able to see some immediate results like jumping up and touching the rim with your fingers. Once you have completed that, take a tennis ball and try dunking it. Then try a football or mini basketball and gradually increase the size of the object in your hands until you are able to dunk a full-sized basketball.

Step 4: Stuff the Basketball Through the Net

Once you have enough height on your vertical jump, take the ball and slam it through the hoop!

As you can see, dunking is not impossible, but depending on your vertical leap and athleticism, it can take loads of training. Or you may have been blessed with the gifts of a great vertical leap. Either way, dunking can elevate your game (no pun intended) and put you on highlight reels for your high school, college, or pro team. Dunks can also change the momentum of a game and give your team the upper hand from just one exciting flush.

So you still want to dunk? Well, get to work!

Who is your favorite all-time dunker? Let us know in the comments below!

I never thought I would dunk, after always being so close even after doing several different programs and exercises in different sports, all trying to master the vertical. The three suggestions above are very accurate and will lead to an improvement in the height of your vertical jump. However, you can do as many exercises or stretches as you want, but until you get the World’s Highest Dunker, Justin ‘Jus Fly’ Darlington and Professional Basketball player, Adam Folker’s Vert Shock training course you will never know the true technique to flight. I now can soar to heights I never imagined, and the rim never looked so sweeter.