How to Play 21 (Basketball) 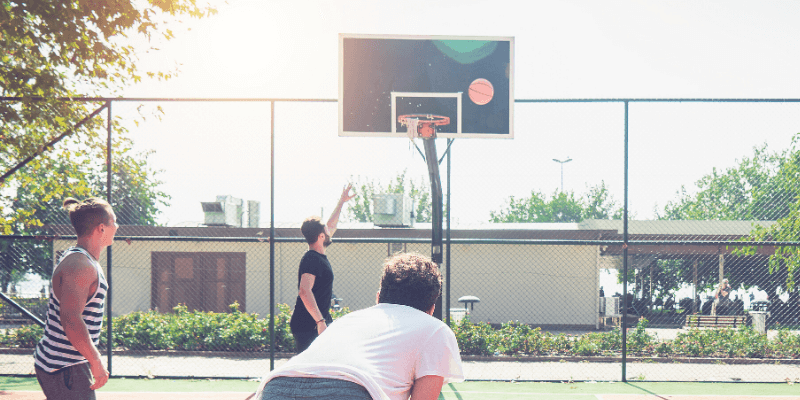 21 is a common basketball variation usually played by at least three players on a half-court. The game is individually-based and the object is to score exactly 21 points before your opponents. By individual, I mean you do not have any teammates within the game and you are responsible solely for your points and overall performance, while other players are attempting the same.

The game doesn’t have a time limit and in order to win, you must score exactly 21 points. If you exceed that scoring limit, your score is reduced as a penalty. Some rules are universally applied while other rules are loosely interpreted based on the group of players with which you are playing. The game is easy to learn helps you improve your individual skills. This article will dive into the game and give you a better understanding of its gameplay and basic structure. Enjoy!

For the game to begin, one player will make a shot from the three-point line and either makes the basket or misses. If they miss the rest of the players will go after the rebound and try and score. If the ball goes in the player that scores will begin shooting free throws.

Once you get the ball, you have to score against the rest of the players in the game. This usually pits the player with the ball against multiple defenders, which is a tough position under normal circumstances. If you make a successful 2-point shot or 3-point shot, you are given a chance to take free-throw shots from the free-throw line. If you miss any free-throw shot before attaining 3 points, other players compete for the rebound.

On the other hand, making 3 successful free-throw shots in a row gives you an advantage because you will check the ball, and it will remain in your possession as other players try to steal it. Any player who steals the ball from you should dribble out of the 3-point line before they make a shot. In games where regular rules are followed, a fouled player gets the basketball and a check at the basketball court key.

The first player to earn 21 points is the winner, however, there are some rules that might stop you from winning. Exceeding 21 points and missing a free-throw shot when you have 20 points, reduces your points back to 11. Two players who have a tied score of 19 points must compete differently to win the game. One of the players should make a shot to get to 21 points and make another additional shot worth 2 points for them to win the game.

Your opponents can also decide to wipe-off your score. Instead of clearing a rebound from a free-throw that was supposed to help you attain 21 points, a defender might make a shot to reduce your points back to 11. After attaining 21 points, the last step is making a successful 3-point shot. Missing the shot reduces your score back to 11.

21 helps players gain confidence in their one-on-one and shot-making skills due to the positions you are put in during the game. Making the rules tougher is another way to up the ante and improve your shot-making skills under pressure. 21 is never easily won as there are always multiple defenders vying for the ball and attempting to score in high volumes before you can get the chance.

Are there any other rules in 21 that you have in mind? Let us know in the comment section below.