How to Play Basketball Overseas 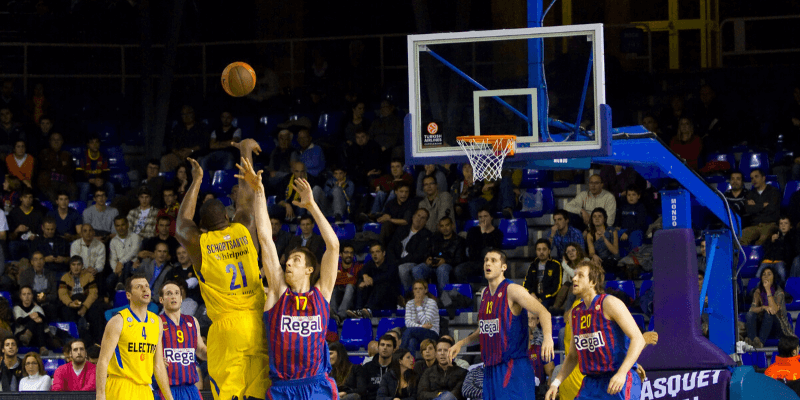 Playing professional basketball is a goal of many amateur basketball players. Getting paid to play the game you love is a dream come true and beats any “real world” job you could have once your playing days are far behind you. But the odds of playing in the NBA or WNBA as a high schooler are less than one percent.

So, if you want to hold out hope of playing professionally, and aren’t good enough to cut it in the NBA, what are your options?

There is a vast world of professional basketball being played in nearly every country around the globe. Many people just aren’t aware of or don’t care about, the basketball being played in these leagues. And who is to blame those people. Between the NBA’s exciting seasons and frantic off-seasons, and with the popularity and talent of the college game, you can’t blame a fan for not being aware of basketball elsewhere.

Most of the top-level talent when it comes to overseas basketball begins and ends in Europe. Europe’s basketball leagues are run similar to their soccer leagues in that they demote the two worst teams in the league and promote the two best teams from a lower division to the upper league each season. To put that in perspective, can you imagine the NBA demoting the Golden State Warriors this season if they continued to have the league’s worst record?

I cheated a bit on this selection. European professional leagues are trickier than the NBA due to their schedule. Each European club plays league games and if club teams are successful enough, they play in what is referred to as the Euroleague, which is a mix of the best teams in Europe. The Euroleague consists of a tournament between these best teams.

As is the case in soccer, this is Spain’s top basketball league and it has been largely dominated by their two most successful clubs, Real Madrid and Barcelona. Some notable players from that league that NBA fans would recognize are the Gasol brothers, Marc and Pau, Kristaps Porzingis, and the most recent star to emerge from that prestigious league, the NBA’s 2019 Rookie of the Year Luka Doncic.

A league whose basketball roots date back to 1904 in Turkey, the BSL has produced high-quality play due to the endless amount of energy and, more importantly money, that the country has invested in the league. Some say it may surpass Spain’s league in the near future in terms of talent and quality play. Former Cleveland Cavaliers coach David Blatt cut his teeth in the BSL which earned him his positive reputation.

How Do You Play Overseas?

Now that we have taken a brief look at what exactly playing overseas consists of, let’s dive into the best steps to take in order to have a chance at playing overseas. Something to remember before we dive into the list is that every player’s path is different and these steps may not work well for everyone. They are all solid places to start researching as many current and former overseas players have endorsed them. Let’s get going!

Highlight reels help players at every level to craft the best parts of their game into one succinct place for coaches and scouts. Highlight reels got their start for high schoolers looking to take their game a step further and play in college. They would create a reel of their best play and send it out to college coaches. It is a way for players to take a proactive approach in their recruitment process instead of waiting to get noticed.

The same principle goes for a highlight reel for someone looking to play overseas. It is well known that no overseas league has the type of financial backing to send their scouts across the world for just any old reason. They pick their spots on who they make a big effort to scout, and if you aren’t one of those players sending them your highlights may get you a tryout.

As I stated earlier, overseas scouts are going to pick their spots when it comes to traveling to watch new talent. Exposure camps and basketball academies are an ideal place for them to find talent because of the volume of basketball players they can watch in a short amount of time.

After researching some of these camps, it brought me back to my childhood and adolescence because the camps are literally set up like regular basketball camps, only the end goal is to earn a job playing professional basketball. They schedule out everything, from meals to mandatory rest times, to time in the pool for recovery. Representatives from overseas leagues attend and look for their next talent.

Yes, these camps and academies cost money, but look at it as an investment as opposed to a “cost”.

This sage advice can be said about almost anything in life, but sometimes it is who you know to help get your foot in the door. If you play college basketball, chances are that your coach has dealt with professional scouts across many leagues and skill levels. If you are a hard worker and a good kid, your coach will almost certainly make a few phone calls to help you out.

Networking is a way to get more jobs as well. If you have been fortunate to have already played overseas, then use the coaches, team staff, and former teammates to pass your name and information along to anyone they may know that can assist.

These talented NBA players got their start overseas, primarily because they were all foreign-born and before excelling in their home leagues, a chance at an NBA roster spot for them was a pipe dream.

These players transitioning from overseas to the NBA is not the norm, but when you see the list you will understand that these superstars were not your ordinary overseas pros.

This 6-time All-Star and 2-time NBA champion began his pro career in Spain on Spanis league powerhouse Barcelona. He came off the bench early in his career as a youngster on the team. Gasol’s big break was when Barcelona won the Spanish National Cup in 2001 and Gasol was named the tournament MVP. The rest was history as he was drafted by the Atlanta Hawks (traded to the Memphis Grizzlies on draft night) and went on to star on the Grizzlies and Lakers.

Ginobili spent seven years overseas, from 1995 to 2002, before his big break in the NBA. The Spurs drafted Ginobili in 1999 and he waited three more years before joining them. In the meantime, Manu led his Kinder Bologna team to two straight Italian League Championships and a Euroleague title. Manu also starred on Argentina’s International team, making the all-tournament team at the 2002 FIBA Championship.

The reigning NBA Rookie of the Year earned his stellar reputation playing overseas beginning at the ripe old age of sixteen. Not only was he playing pro at sixteen, but he was playing at Real Madrid, one of the most famous Spanish basketball teams ever. At eighteen, he won the MVP of the Euroleague, and his star was on the rise. Doncic made the leap to the NBA after the 2017-18 season and was drafted by the Dallas Mavericks.

Overseas basketball, while not as popular and highly skilled as the NBA, is nothing to scoff at. The product is high level and it shows with the type of talent that has come from overseas to thrive in the NBA. If you want to become an overseas player, you need to work on your game and follow some of the tips we discussed in the article. Talent can get you very far, but due to the unorthodox business of professional basketball, every little bit of effort helps.

Have you ever thought about playing pro basketball overseas? Tell us about it below!