How to Wear a Basketball Jersey 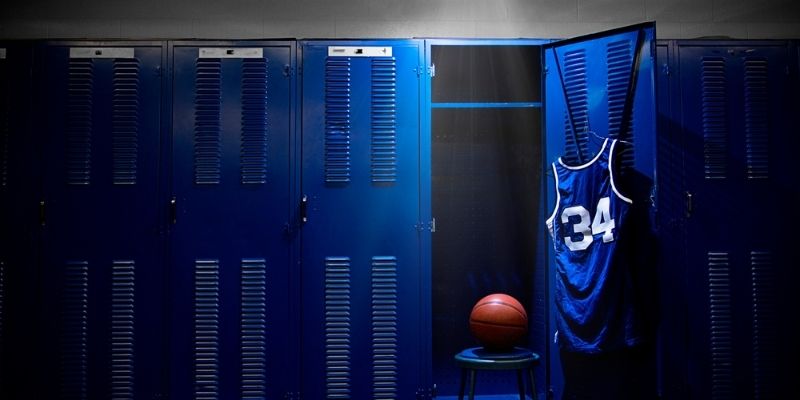 Everybody wants to look good on the court, including me.

One of my favorite parts of the season during my high school and college playing days was when our coach would unveil our new uniforms each year.

As an upperclassman, I was always quick to grab my size first to make sure my jersey fits perfectly.

But, what does a perfect-fitting jersey mean? Have you ever thought about the right way to wear a basketball jersey?

This article will be your jersey-wearing guide, whether you’re breaking ankles on the court or turning heads off it.

But first, do you know the history of the basketball jersey?

In 1892, Dr. James Naismith created the sport of basketball in Springfield, Massachusetts. It was originally only played in Physical Education classes. However, it grew in popularity to the point where athletes played competitively.

By 1920, basketball enthusiasts were looking for a clear way to decipher between teams, and the uniform was born. The first uniform was made of wool; the jerseys were fastened by buttons.

As you can see by the image above, the earliest basketball jerseys were not feasible for the long haul. Talk about a less than ideal outfit to break a sweat in! The wool made it extremely hot in the summer months. Players quickly needed an alternative.

By 1940, jerseys were made from nylon and polyester for better air circulation; button-ups were replaced with the track-style jerseys we recognize today.

The 1960s brought about another change in the jersey: they became more form-fitting for movement and comfort. The shorts were still short, falling to just about the middle of a player’s thigh, but the jersey retained a track-style fit.

This style essentially remained until the late-1980s when Michael Jordan, Magic Johnson, and Domonique Wilkins catapulted the NBA even further into popular culture.

Nowadays, basketball jerseys and uniforms have become an industry unto themselves. Companies like Nike, Under Armour, and Adidas work with colleges and professional leagues, contracting them to outfit their players with the highest quality jerseys and shorts for optimal performance.

Not only has the jersey raised its profile on the court, but it’s now a fashion statement too. Fans can grab their favorite player’s jersey and support them in public or at the arena.

A jersey for fashion is a little different than one built for playing. Let’s go over how to wear a jersey properly on the court. After that, we’ll help you up to your style profile with a jersey off the court.

How to Wear A Basketball Jersey On The Court

While there are a few variations to consider when wearing a jersey to play a game, the proper way to wear it is almost universal.

The jersey shouldn’t be too loose or baggy because you won’t feel secure. The armholes of the jersey, while bigger than most t-shirt armholes, shouldn’t be too big. Large holes could allow players to get their arms stuck while defending. If the jersey’s too large, you may feel like you’re swimming in it.

The jersey should be longer than a traditional shirt but not too long. Again, the loose baggy look that jerseys offer can go too far, making you feel like you’re wearing a giant garbage bag. Jersey security always helped me shoot the ball better; my clothing moved in sync with my shooting stroke.

Most leagues require that your jersey is tucked in during games. Length shouldn’t matter as long as you can tuck it in without it falling out constantly.

As for the look of the jersey to outsiders, the team name and logo (i.e., “Wildcats”) should be displayed directly on your chest. If the logo or words fall to your stomach, you’re probably wearing a bigger jersey than you need.

If the logo or team name is displayed above your chest, you might want to look into a larger size.

Wearing a Jersey With an Undershirt

I didn’t wear a t-shirt under my jersey in high school, and it suited me well. In college, I opted for a t-shirt underneath because many of the gyms we played in were big, cold, and drafty.

If you’re going to wear a t-shirt underneath your jersey, consider that when choosing your size. A bunchy jersey and undershirt are just as cumbersome as a loose-fitting jersey.

Nowadays, NBA players will wear a shirt under their jersey, but not the regular cotton one we are accustomed to. NBA players wear compression shirts. Why?

How to Wear A Basketball Jersey Off The Court

Nothing pops more than the colors of your favorite team on your back with a fashionable hat and pair of sneakers to match.

Wearing Jerseys To Games: A History

As a 38-year-old, I can’t remember a time when people didn’t wear their favorite players’ basketball jerseys to games. After researching this phenomenon, I realized my memory has served me wrong.

The trend of wearing basketball jerseys to live games was conceived during the boom of the Michael Jordan era in the NBA—not until the mid-90s. If you look at old pictures from NBA games in the 80s, you simply won’t see jerseys.

However, Jordan was so popular that everyone wanted to wear his jersey (and his sneakers) and “Be Like Mike.”

During the mid-90s, the New York Knicks and the Chicago Bulls had one of the most heated rivalries in the NBA. The Knicks’ number-one fan was filmmaker Spike Lee.

You can see Spike Lee wearing a John Starks jersey in those playoff series, proudly rooting for the Knick guard and trash-talking Bulls players from his courtside seats. These games were nationally televised, making the jersey-at-the-game look a thing.

Now, you can’t turn a game on without some young fan wearing their favorite player’s jersey to the arena. Steph Curry brought on a new cultural phenomenon with young NBA fans who looked up to him because of his charisma, amazing skills, and highlight-reel plays.

One thing that the Warriors love about Curry is how well his jerseys sell. That money is revenue that goes back to the team—and owners love to make money.

A basketball jersey should be worn correctly at all times, whether you’re playing or making a fashion statement. Correctly wearing your jersey will positively impact your performance—if you take the time to ensure it doesn’t hinder your movements.

Styling with a jersey on is also important, but don’t find yourself wearing mismatched sneakers with it. Your friends will never let you hear the end of it!

What is your favorite jersey to wear when you aren’t playing? Let us know about it in the comments section!