What is an Illegal Screen in Basketball? 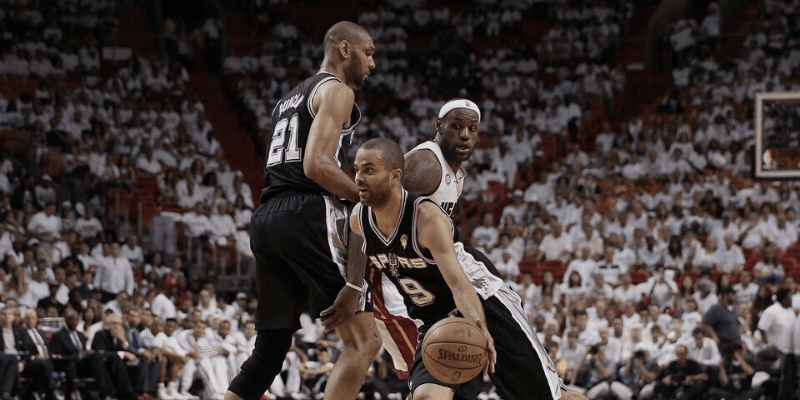 A screen, also known as a “pick” is an important offensive tool that is frequently used to create open shots or driving lanes. The screen involves one offensive player blocking or moving to a position that will impede the movement of another offensive player’s defender allowing them to get free.

Screens are a big part of most offenses and you will often hear about plays such as a “pick and roll” or a “pick and pop” being utilized by the majority of NBA teams. These are traditional but effective ways to use screens and most teams will incorporate these into their offense in one form or another.

Picks are a fundamental of basketball and coaches usually begin teaching how to set them as soon as players are old enough to learn simple plays. It is important that players learn the technique properly otherwise they will get called for illegal screens.

This concept is important for coaches and players to understand and it is also nice to know as a fan since you will often hear commentators and analysts speak about it. Let’s take a look at the definition of a screen, the difference between a legal and illegal one, what the penalty is and why it needs to be enforced.

The Definition of a Screen

A screen is an offensive move in which a player uses their body to block the defensive player who is guarding one of their teammates. The player setting the pick (the screener) must first establish their position near the teammate’s defender or in the path of the defender. The teammate will then make a cut close to the screener in a manner that sheds the defender, leaving the offensive player open to shoot, pass, receive a pass or drive to the basket.

There are different types of screens such as on-ball, off-ball, down-screen, and a back-screen. The different types all require the same set of fundamentals discussed above. Take a look at this instructional video to see an example of how to set a proper screen.

The most important thing is to make sure that the pick being set is not illegal. Let’s take a look at what will make it illegal.

What Makes it Illegal

An illegal screen can happen for multiple reasons but it is most likely that the offensive players are not using sound fundamentals when executing the play. In general, the screener must provide space and give the defender a reasonable opportunity to avoid the pick. Below are some situations that will most likely draw a call from the refs.

This is something we see from players who have not properly learned the fundamentals. Leaning your body or shoulder into the defender might seem sneaky but the refs will usually catch this one right away and make the call. Even if the screener’s feet are completely stationary, they are not allowed to lean their body toward the defender.

Sticking your foot, knee or hip out to make it more difficult for the defender to get around is also illegal and will most likely draw anger from the defender. Tripping or going for the legs in basketball is looked down upon and can lead to serious injuries.

For young players who are still learning, it can be tempting to extend an arm or try to grab the defender with their hands. This will result in a very quick and easy call by the officials.

This is another one that occurs from players who are not playing fundamentally sound. It is probably the most common illegal screen violations and can occur for multiple reasons. The offensive player must stay stationary and not move into the defender’s path or along with them as they attempt to go around. They are allowed to move once contact is made in order to “absorb” the blow but the movement must not be to intentionally impede the defender.

Movement often occurs when running a “pick and roll” or a “pick and pop” and the screener moves prematurely into the “roll” or “pop”. Movement may also occur when the ball handler is impatient and does not wait for the teammate to get properly set. The ball handler may try to drive around the screener while they are still moving towards the defender and this can end in a violation.

When this violation occurs, the offending player is given an offensive foul. This will result in a turnover and the other team will get the ball or possibly shoot free throws if they are in the bonus. This can often be a critical call that can change the momentum of a game, so it is important that players practice setting screens in order to avoid this penalty.

Why Does Basketball Need This Rule

A good pick is one of the more physical plays in basketball. It’s not uncommon to see bodies colliding or falling to the court after an effective hard screen is set. Because of this, the game must have rules around it to ensure that the opposing team has a fair opportunity to defend against it.

Without this call, a team could just block defensive players like an offensive lineman in football. Not only would this create an unfair advantage to the offense, but it would make the game far too physical and would probably result in fights and serious injuries.

The illegal screen violation is an important rule in the game of basketball. Without it, the strongest players would be able to push defensive players out of the way allowing their teammates to score at will.

The illegal screen takes place when players are lazy or they just do not know how to properly set picks. This can usually be corrected by good execution of plays and making sure that players learn the proper fundamentals of setting a screen at a young age. Take a look at this video for some examples of NBA players not executing properly. It goes to show you that even players at the highest level aren’t immune to illegal screens.


Do you think the illegal screen rules are too strict? We’d love to hear from you, so please leave your comments.