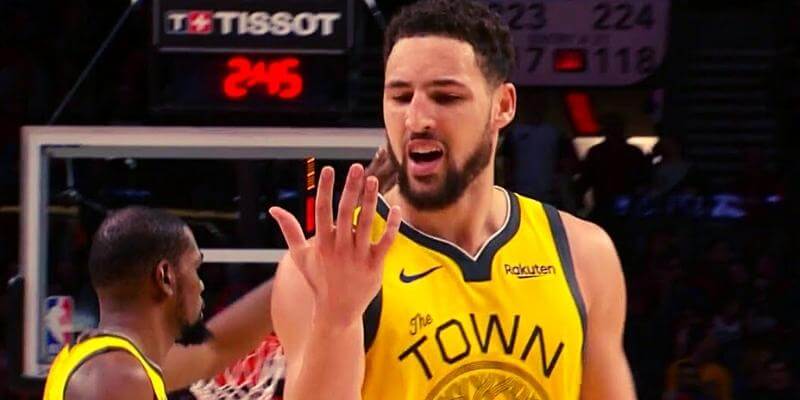 There are very few left handed NBA players. So much so that there’s a bit of a stigma when it comes to those who shoot southpaw. However, it’s not as much of a detriment as many people think. In fact, it can be quite an advantage.

This guide looks at Klay Thompson’s dominant hand, as well as dominant hands of other players around the NBA. That insight will shed light on how each side fares, and take an in-depth look at whether the hand a player shoots with matters at all.

While there are plenty of videos of Klay Thomspon shooting with his off-hand floating around the internet, the Warriors guard is in fact right-handed. He shoots extremely well with his left, but so do most top NBA players who need to score in various ways.

There are a lot of videos that show Thompson practicing with his off-hand because it’s something he’s done when his right hand gets injured. He doesn’t make a big habit of it, but there’s nothing wrong with being able to shoot with both hands. As such, he practices it from time to time.

Thompson is a pure three point threat, but that doesn’t mean he can’t go left when he needs to. In fact, pulling up going to the left side is often better for right handed players because it enables them to more easily square up to the basket when entering their three motion.

Despite his reputation (and what you might see) it shouldn’t be a big surprise that Thomspon shoots with his right hand. Not only is most of the population (88 percent) right handed, but most NBA players are as well. In fact, only 8 percent of the league shoots left handed.

At that rate, it’s no wonder there are so few left handed superstars. Most of the league leaders in every category are righties, but that’s not always true. Artis Gilmore was left handed, as was Bill Russel. Zion Williamson, James Harden, and Ben Simmons are too.

As such, there are some great left handed scorers, but they are few and far between. To put into context how few there have been over the years, Harden is second all time in left-handed scoring despite the fact that he’s 41st when considering righties. That’s quite a drop off.

Thompson is one of the best shooters to ever play the game. There are many reasons for that, but him being right handed is not as connected to his shooting percentage as it first might seem. Left handers actually fare better in the NBA than right handers overall.

Studies show that left handed players tend to accrue better passing, rebounding, and scoring stats that right handed players. It could be due to the fact that southpaws have slightly better hand eye coordination, but nobody knows for sure.

Lefties do typically pick up shooting mechanics more quickly, and they work on both of their hands much earlier on. That usually means they’re better at driving or finishing around the rim as they can freely switch how they score on the fly.

While right-handed shooters have an easier time disrupting the shots of lefties, that’s not reflected in the final stat sheet.

In the NBA, shooting hand typically doesn’t matter. Regardless of how someone shoots, all that matters is how often the ball goes into the basket. Thompson is proof of that. He also shows that most top players can get the ball in the basket in numerous ways.

Shooting from the left side is not something he does very often. Even so, it’s in his arsenal if he ever needs it. Though, given how well he hits with his dominant hand, it’s unlikely he’ll be switching it up too much anytime soon.