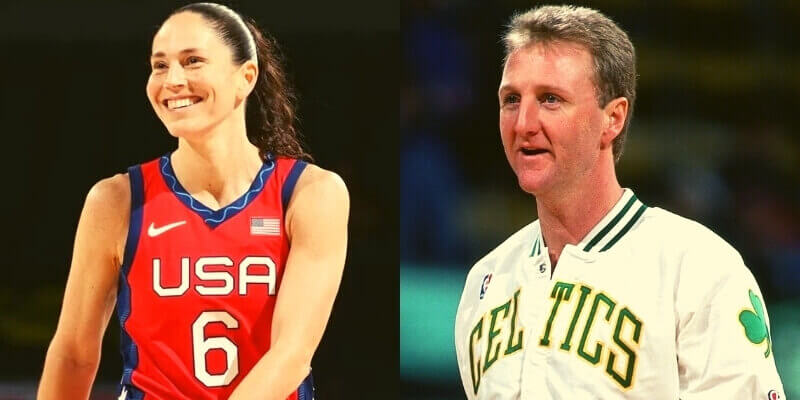 As two of the most successful basketball players in their own right, Sue and Larry Bird are worshipped in most basketball circles. While Larry and Sue’s careers never overlapped – Larry is 24 years her elder – they both left huge footprints in the game of basketball.

There is one question, however, that comes up a lot when people hear their names: is Sue Bird related to Lary Bird?

The answer is no, but you would think they were with how much the question comes up for Sue. She addressed it all the way back during an interview with WNBA.com:

“Since I’ve been five, people ask me if we’re related,” says Sue. “It is usually the third question in a line of questions. What’s your name? Sue Bird. Oh, what do you do? I play basketball. Are you related to Larry Bird?”

She is a good sport about it and admits that there are worse people that your last name can be linked with.

Their last names aren’t the only reason they are so notorious around basketball. Both are champions, Olympians, and Hall of Famers (future for Sue as she is still playing) many times over. Let’s take a look at Sue and Larry’s careers side by side from the beginning.

When it came to their childhood upbringing, Sue and Larry Bird couldn’t have been more different.

Sue grew up in Long Island, NY an avid lover of sports. She excelled at basketball but also played soccer and ran track. She started playing high school basketball at Syosset High School but wanted more basketball competition. She enrolled in Christ The King Regional High School in Queens which was a great move for her career.

Larry “Legend”’s childhood was far different than Sue’s. He grew up in West Baden Springs, IN whose population was just north of 500 people in 2010. Bird had somewhat of a tragic childhood and adolescence. His mother raised him most of his childhood, working two jobs. Bird’s parents divorced when he was in high school and his father committed suicide shortly after.

Larry used basketball as an escape from life and starred for his high school team. His final averages for his senior year were 31 points and 21 rebounds per game. His game was so impressive that it caught the eye of some big-time college programs.

Larry Bird actually enrolled at the University of Indiana but left a month into his freshman year. The campus and the city of Bloomington were too big for small-town Bird. He ended up starring at Indiana State University – averaging 30 points and 13 rebounds during college – leading the Sycamores to an undefeated season and the NCAA National Title Game in his senior season.

Facing off against heavy favorites Michigan State, with star Magic Johnson at the helm, Bird’s team fell to the Spartans. The tournament, however, made Larry a household name.

After a successful season at Christ The King Regional High School, Sue Bird ended up at women’s basketball powerhouse UConn, under Hall of Fame coach Geno Auriemma. Like Larry, Sue ended up in the NCAA National Title Game. Unlike Larry, Sue won the NCAA title twice!

After UConn, Sue got drafted first overall in 2002 by the WNBA’s Seattle Storm. Sue finished second in Rookie of the Year voting and made an All-Star and All-WNBA Team in her rookie season. By 2004, the Storm had built a formidable team around Bird and the team won their first title.

Sue won three more titles over her 18-year, and counting, career. Sue has also had an unmatched Olympic record as well. She and Diana Taurasi are the only two basketball players, male or female, with five Gold Medals. She is also a 12-time All-Star, 5-time All-WNBA First Teamer, and leads the league all-time in assists, games played, and minutes played.

Larry Bird’s path to the pros went a little differently. After his junior year in college, he was selected 6th overall. Bird decided to stay in school one more year, which was the season that he led his team to a 33-0 record. Bird immediately made the Celtics better, averaging 21 PPG and 10 RPG in his rookie year.

It only took two seasons for Bird to win his first NBA title. He would win two more titles during his career and become embroiled in one of the most notorious sports rivalries of all time with the Lakers. Interestingly enough, the Lakers leader was Magic Johnson, Bird’s old nemesis from Michigan State.

Larry’s career was cut short after only 12 years when back and knee pain became too much to bear. He ended his career as a three-time champ, 12-time All-Star, 10-time All-NBA, and three-time league MVP.

So, while Sue and Larry Bird aren’t related, there is something in both of their DNA that is very familiar. Like many professional athletes, the two Birds have relentless work ethic and competitive streaks.

Larry and Sue both excelled at their respective positions and it is hard to mention the greatest WNBA point guard without mentioning Sue and the greatest NBA small forward without bringing up Larry “Legend”.

Are you a fan of Sue or Larry Bird? Perhaps both? Let us know why in the comments section below!