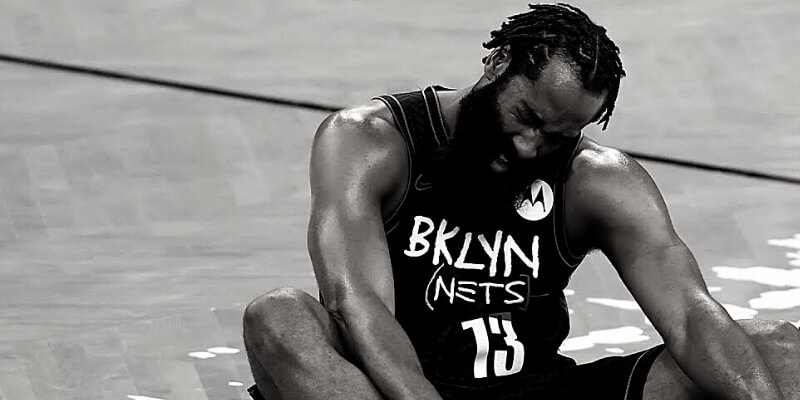 Every professional athlete has to deal with injuries in one form or another throughout their career. Most players hope those stay relatively minor, but some players will experience much more serious ones too. Luckily for James Harden, he’s almost always on the court.

Before getting into his exact history, it’s important to note that Harden is not someone who often sits on the sidelines. He’s a strong player who knows how to take care of his body. That’s why he hasn’t suffered any major breaks, tears, or fractures. He’s avoided surgery too.

Harden’s health is a big reason why he’s been so good for so long. Staying ahead of injury is not something players have a lot of control over. Despite that, it can still separate a good star from a mediocre one. The more games you’re able to play, the more useful you’ll be.

As healthy as Harden is, no player is immune from ailments. He, like anyone who’s expected to use their body so much each year, has missed a few games here and there due to a few problems. They just happened to be relatively minor.

Harden’s first real injury occurred towards the end of the 2012, when Metta World Peace gave him a serious concussion by accidentally elbowing him in the side of the head. He missed the last part of the season, but managed to come back for the playoffs.

The fact that Harden didn’t miss any real time until he was three years into the league shows just how resilient he can be. He’s a tough player, but has done a great job of mitigating injuries. When he was on the Thunder, he pushed through anything that came his way.

After that stint, he missed three games due to a foot injury in 2013 and then had a huge gap where he didn’t miss any real time until his left hamstring caused him to skip out on three games during the 2018 season. He also suffered a left knee and calf injury that year.

For Houston, James Harden (Hamstring) will miss his first game of the season along with Luc Mbah A Moute (Shoulder)#OrlandoMagicUK

Moving into 2019, the star ended up with toe, eye, cervical, wrist, and shoulder injuries. However, none of them were enough to keep him sidelined for any extended period of time. Whenever he got hurt, he rested up and got back on the court.

The Curse of Age

While Harden has done a good job of staying on the court, his smaller injuries stacked up in recent years. 2021 was especially brutal for the guard. After moving through a relatively harmless 2020 (one thigh injury) he sustained 12 different ailments the following season.

In 2021, Harden experienced problems with his ankle, thigh, hamstring, and neck. He also missed quite a few games due to general rest. While no one likes to see their best players injured or out, it makes sense to take some time and get better rather than push through.

James Harden will not play in Game 3 vs. Bucks pic.twitter.com/BDVL86DE7S

The older a player gets, the more careful they need to be with how much they can play. While Harden, like so many NBA greats, is still a great scorer, he can’t be as reckless as he once was. That means missing a bit more time than he used to.

A great example of that is in 2022, where Harden sat out for multiple strings of games due to a lingering hamstring injury. It first bothered him in the summer of 2021, and then came back at the end of January in 2022. He sat before (and during) the all star break.

In year’s past it’s unlikely that Harden would have missed as many games as he did. However, it’s never good to risk further or worse injury. Keeping in tip-top shape is an incredibly important part of any athlete’s career. If the Sixers don’t need to push him, they definitely won’t.

Staying healthy is a critical piece of any pro athlete’s job. While it’s easy to overlook, those who actively avoid injuries (or playing through them) tend to have much longer and more successful careers than players who are always pushing through pain.

Harden has had a good amount of breaks as of late, but that’s more due to his team being careful than anything else. He’s an incredible player who knows how to keep himself at the top of his game. If he continues that trend, he has many more great years ahead of him.