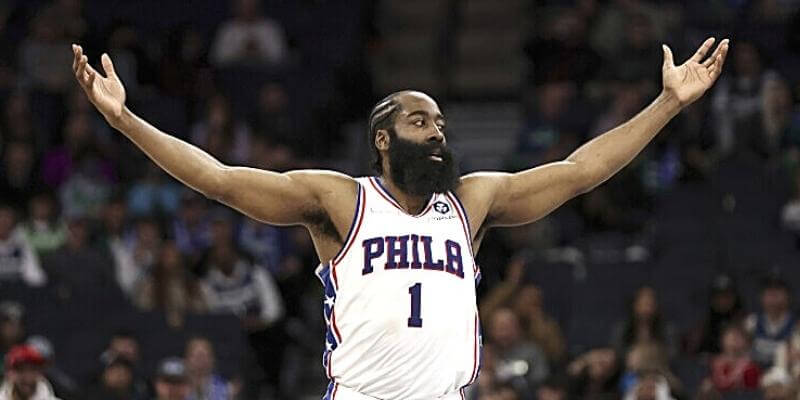 Most people evaluate NBA players based on height and weight. However, wingspan matters a lot too. Just about every pro athlete has a wingspan that’s longer than their height, which enables them to play above the rim, snag rebounds, and lockdown on defense.

One such player is James Harden. While you may not think about it, his long arms and incredible reach are a big reason why he’s so good. I’ll take a deeper look at that aspect of his game below.

Almost every NBA player has a wingspan that’s taller than their height. However, the shorter a player is, the more impact that discrepancy matters.

A 7-foot center with a 7’5 wingspan is not as impressive as a 6-foot guard with a wingspan that measures 6’5.

Knowing that shows why Harden’s reach matters so much. His arms are a total of 6’11 across, which puts his wingspan at six inches longer than his 6’5 height. That’s an incredible amount of length, especially when looking at other players around his size.

Being able to get to where the defender can’t is extremely useful when it comes to shooting because it allows the player to go above contests. On the defensive side of the ball, it’s also useful in that they can reach out for steals or blocks where others would come up short.

Such examples are why a good wingspan is so important for Harden. He’s able to get up on another level and make plays those without his reach wouldn’t be able to do.

A Cut Above Average

As long as Harden’s wingspan is, it’s nothing without context. The Sixers guard doesn’t just have an extended reach, he has an extended reach compared to just about every other guard in the league.

Currently, the average wingspan for a point guard is 6’6. Harden is way above that. If you see him as a shooting guard, he’s still above the norm. The mean wingspan for that position lands right at 6’8. In fact, even the small forward wingspan lands at 6’10.

Taking that into account, it shows how long Harden’s wingspan actually is, and why he’s so crafty out on the court. Players can only defend, rebound, or shoot to where their arms stretch out to. If Harden is the same size as a defender but has much longer arms, that’s an advantage.

The Advantage of Length

To get a better idea of the above section, let’s say Harden’s up against another 6’5 player. When he goes up to shoot, he already has a small height advantage. Then, if his arms give him an extra inch or two it’s the difference between being contested (or blocked) and getting it off.

The same thing works for defense, but in reverse. Offense will always have a slight advantage over a defender due to the fact that they go up first. A longer reach enables Harden to close that gap more quickly than other players and more accurately contests shots.

James Harden’s talent comes from many different aspects. However, there’s no doubt that his extremely long wingspan is a big reason why he’s so effective on the court. The extra inches on his reach enable him to shoot, defend, and score with relative ease.

Long arms do not automatically make an NBA player effective, but they certainly help. Harden is a great example of that, and shows why more and more teams are paying attention to arm length. Once an ignored measurement, it’s something everyone now looks at.