How Many Rings Does JaVale McGee Have 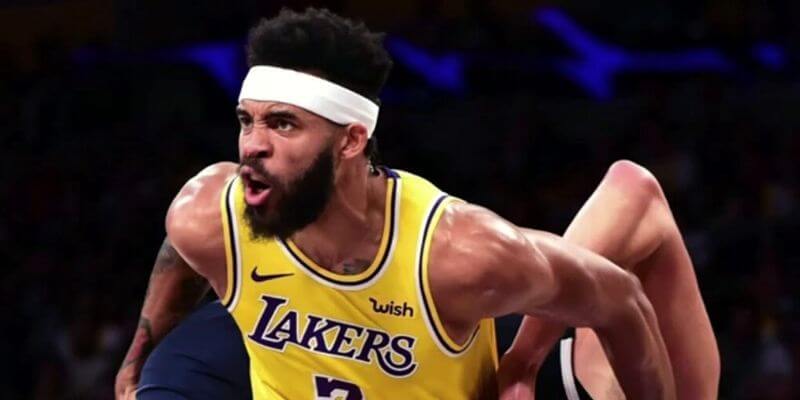 Being in the right place at the right time: it plays a critical part in your success as a basketball player. It could definitely be said for JaVale McGee, who has won three NBA rings while only playing a bit part off the bench for each team.

McGee was lucky enough to have played on a historic team in the Golden State Warriors, winning two rings in two years. He also played with the LeBron-led Lakers last year, almost willing his purple and gold squad to a title while in the NBA COVID Bubble.

We will dissect the years that McGee won it all with his teams in this article and see where he fit into each title picture.

JaVale McGee hails from Flint, Michigan, and bounced around to three different high schools. His next stop was the University of Nevada, where he averaged 14 points and 7 rebounds in his sophomore year. After a promising year, McGee decided to go pro and was selected by the Washington Wizards in the 2008 NBA Draft.

As a Wizard, McGee showed promise, averaging more than 10 points and 8 rebounds during his final two seasons in Washington. In 2012, he was dealt to the Denver Nuggets and played more of a reserve role during those four seasons. He bounced around to Philly and Dallas over the next two seasons before landing in Golden State. The Warriors were halfway to working towards their dynasty, and they welcomed the eccentric McGee with open arms.

During both Warriors’ title runs that McGee was a part of, he played the role of bench spark nicely, even scoring in double figures multiple times off the bench during key playoff games. After winning two titles in Golden State, he moved just down the road to the Lakers, where he backed up Anthony Davis for two years, compiling another ring.

Golden State’s 2016-17 season was almost as good as their historic 2016 season, in which they actually didn’t win the title. With Kevin Durant’s addition to an already stacked team that consisted of Steph Curry, Klay Thompson, and Draymond Green, the Warriors made it look easy most nights.

JaVale McGee played a bit part in the Warriors’ 2016-17 season but came up big when it counted. He was a big factor in the Warriors’ sweep of the Portland Trailblazers in the first round, scoring 15 and 14 points in Games 2 and 3, respectively. The Warriors swept the entire playoffs heading into the Finals, only losing once to the Cavs before hoisting the NBA championship trophy.

Though JaVale McGee wasn’t a huge factor on this super star-studded Warriors squad, he played smart and had some really efficient games across the playoffs. He shot 72% from the field and had 15 blocks over 17 playoff games. He was also a great chemistry guy on the team; everyone on Golden State had his back as much as he had theirs.

In 2017, the Warriors were in the driver’s seat, cementing their legacy as one of the most dominant teams in NBA history. They won an NBA record 73 regular-season games in 2016 and won the title in 2015 and 2017. /the 2018 team had unmatched team chemistry across the entire roster.

JaVale McGee saw some progression as well, playing decisive minutes for the team. He was even inserted into the starting lineup after the All-Star break. When the playoffs started, McGee and the Warriors were title favorites yet again. They lost only 5 games during the first three rounds of the playoffs. Golden State had their sights set on the Cleveland Cavs in the Finals for the fourth straight year in a row.

JaVale McGee showed flashes during the early playoff rounds but saved some of his best playoff basketball for Games 2 and 3 of the Finals. In Game 2, McGee went a perfect 6 for 6 from the field and scored 12 points. He followed that performance up with a 10-point showing in Game 3—in just 14 minutes. Golden State dominated the Cavs, sweeping them in just four games.

JaVale McGee had been on the opposite end of LeBron James for his first two titles. He then found himself teaming with him on the Lakers, who were heavily favored to win the 2020 title. As usual, McGee positioned himself as one of two Lakers big men to hold the reigns of the paint when LA’s superstar Anthony Davis was getting a breather. And McGee made the most of his time on the floor.

JaVale averaged sixteen minutes per game while scoring in double figures fourteen times in the regular season. He also tallied at least three blocked shots in twelve games. He didn’t play a starring role in the playoffs—he actually didn’t play a minute during the Finals. But he was a big part of the Lakers’ success in getting the top seed for the postseason.

JaVale McGee began the 2020-21 season on the basement-dwelling Cavaliers, but was in trade talks for most of the season. He was traded to the Denver Nuggets before the trade deadline and will play backup minutes behind potential league MVP Nikola Jokic.

Denver made it to the Western Conference Finals last season and has upgraded their roster before this season’s playoff push with the addition of McGee and young talent Aaron Gordon, who they received from the Magic at the deadline as well.

If the Nuggets come together as a team, there is no reason that they can’t end up in one of McGee’s most familiar places: the NBA Finals. He averaged almost 8 points and 8 rebounds on 52% shooting for the Cavs, showing that he still has some basketball left in him when he’s put in the right situation.

JaVale McGee’s career has been a journey, to say the least. He started as a young, potentially troublesome, pro athlete who found himself during his quest towards NBA success. His career averages of 8 points and 5 rebounds aren’t groundbreaking in the grand scheme of NBA history, but McGee will always have some unforgettable moments in the league—which includes hoisting the NBA Title on three separate occasions.

Has JaVale McGee ever played for your favorite team? What are your thoughts about the NBA journeyman? Let us know in the comments below!