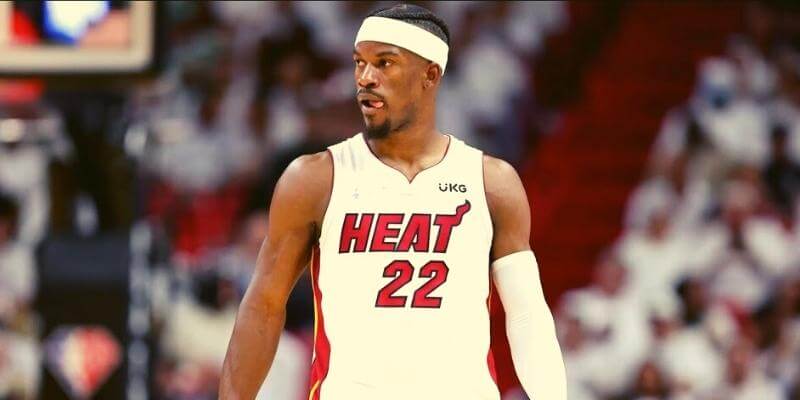 Height and wingspan are two of the most important measurements in the NBA. Unlike weight, they don’t change over time. They’re also the two best ways teams can quickly evaluate a player’s natural abilities and overall athleticism. However, they rarely tell the whole story.

To expand on that point, this article will go over Jimmy Butler’s dimensions and use that information to show how certain players don’t need exceptional measurements to thrive in today’s NBA. Sometimes, talent is more than enough.

Being big tends to help in the NBA, especially if a player sits in the middle ground around 6’6. That gives them the strength they need without being so small that they get overpowered or so big that they can’t recover properly. That’s exactly Butler’s wheelhouse.

The powerful small forward stands at 6’7 but has strong explosiveness and boasts a nearly 40-inch vertical. That gives him the ability to push through bigger players or stop strong attacks at the rim. It’s also the reason he works well at both shooting guard and small forward.

A lot of Butler’s versatility comes from his height, and he utilizes it extremely well. He’s not particularly tall for his position, but he knows how to use his frame better than most.

Following up his average height, Butler does not have a great wingspan either. Most NBA players want a wingspan that’s at least a few inches longer than their height. In fact, most all-stars do. Butler is the exception to that rule.

The Heat guard’s wingspan measures a modest 6’8. That is still long, but it’s only one inch longer than his body length. In fact, there are many point guards and small shooting guards (including Bradley Beal and Donovan Mitchell) whose reach goes far, far beyond Butler’s.

A once-inch discrepancy puts him as one of the smallest in the NBA. Still, he manages to thrive due to his ability to use his body despite having shorter arms. He also gets into other players and uses his solid weight on both ends of the court.

Though he’s not able to contest shots or grab rebounds as well as those with longer arms, Butler still succeeds due to his insane body control. He doesn’t try to go over people so much as he tries to go around them.

Butler isn’t the most impressive specimen on paper. He’s not too tall for his position, and his weight and wingspan are nothing to sneeze at. Even so, he gets a lot of bonus points for his raw skill, general athleticism, and unwavering toughness.

The Heat guard is a true leader. He knows how to elevate his teammates, isn’t afraid of the moment, and always shows up when it counts. His clutch ability is one of the big reasons he’s seen as a great player. He doesn’t just play in big games, he dominates.

He has a slew of impressive playoff performances under his belt, and his postseason achievements only grow with time. He’s also extremely tough, never backs down from a challenge, and is known to take hits and keep on moving.

Butler has an amazing amount of will on top of his raw athleticism and talent. That’s what helps set him apart.

Basketball, like any game, is a mix of skill and god-given abilities. By all accounts, Butler measurements are average. He’s not particularly tall, doesn’t have a ton of extra weight, and his arms aren’t too far beyond his height. Despite that, he’s still an extraordinary player.