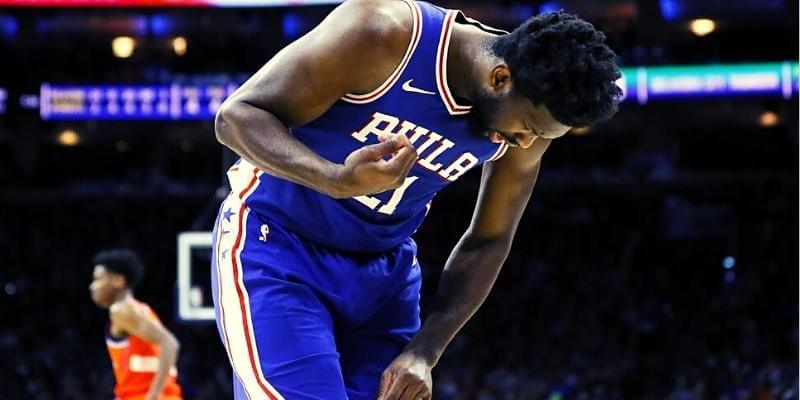 Every NBA player has to deal with injuries at some point in their career. Regardless of how careful they are or how much they sit, ailments are simply part of the job. Prevention, as well as trying to stay on top of them, is what’s important.

However, not everyone can stay healthy. Here, I will break down Joel Embiid’s complete injury history. The Cameroonian has dealt with several issues over his NBA career, ranging from the minor to the more serious. This article covers each one, as well as when they occured, below.

Embiid is a special case because, unlike so many other superstar players, he dealt with injuries before he ever came into the league. The center, being as tall and as heavy as he is, broke a bone in his right foot before even setting foot on an NBA floor.

The fracture caused him to have surgery, which was initially set to sideline him for four to six months. However, rather than rushing him back out onto the court, the Sixers took care of their budding star and didn’t play him at all his first year.

He then suffered a setback during his recovery, which kept him out for even longer. While Embiid has pushed through a wide range of ailments, there’s no doubt that he’s had more setbacks than most other all-stars.

After his early surgery, he had to undergo another season-ending procedure in 2015. That pushed his NBA rise even further back and prevented him from getting into any real groove. Some thought he wouldn’t play at all.

Embiid recovered from the 2015 surgery to have a decent 2016, even if he only played in 31 games. However, the surgery bug came back the following year.

At the start of 2017, he tore his meniscus and had to go under the knife once more. That took him out for the rest of the year.

The only other time he had to take significant time off due to a surgery was during the 2017/2018 season. He had a great year, and was named all-star for the first time, but suffered an orbital fracture in his left eye that took him out for two weeks.

Pushing Through the Pain

Embiid not only dealt with bigger injuries, but the Philadelphia star has gone through a range of  smaller ones as well. All told, he’s had 49 different issues throughout his career. That includes missing games due to soreness, general illness, as well as the aforementioned surgeries.

What’s so unique about Emiid’s situation is that, despite his talent and fanfare, he’s never stayed healthy for an entire season. After his first two big injuries, he has yet to play in a full 82 games. In fact, the most he played in over one season was 2021, where he played in 68.

Besides his most recent push, he’s only played in more than sixty games twice and typically plays around 50. Some of that is due to general rest and caution by the Sixers franchise, but a lot of it is due to smaller injuries as well.

Sixers center Joel Embiid has a small meniscus tear in his right knee and will be day-to-day, team says. He's out for Game 5 tonight.

Embiid has long been touted as one of the best centers in basketball, and rightfully so. Despite that, there’s no doubt his ailments have prevented him from taking that true next step. He’s careful with his body, which is important, but he can’t quite stay healthy either.

Currently, the superstar averages 26 points and 11 rebounds for his career. Not only that, but his stats have steadily improved each and every season. His points per game went up to a stunning 30 in the 2021 season. The sky is truly the limit for the seven footer.

A big part of that is learning to stay healthy, cutting down on risk, and doing what he can to keep his body in good shape. We have seen what he can do with nearly seventy games, there’s no telling what he could do with a full eighty two.

Joel Embiid is a great player, but a player is only as good as their health. If an athlete gets injured or can’t stay ahead of his issues, he’s never going to be considered one of the all time greats. Embiid can get there, especially given his recent stats, but it’s going to take some work.

He’s had a lot more work done (and time missed) than most other athletes at his level. It’s not just about getting on the court as much as possible, it’s about doing so without creating further problems. As long as Embiid does that, there’s no reason he won’t hoist a trophy one day.