What is Jordan Kilganon’s Vertical Leap? 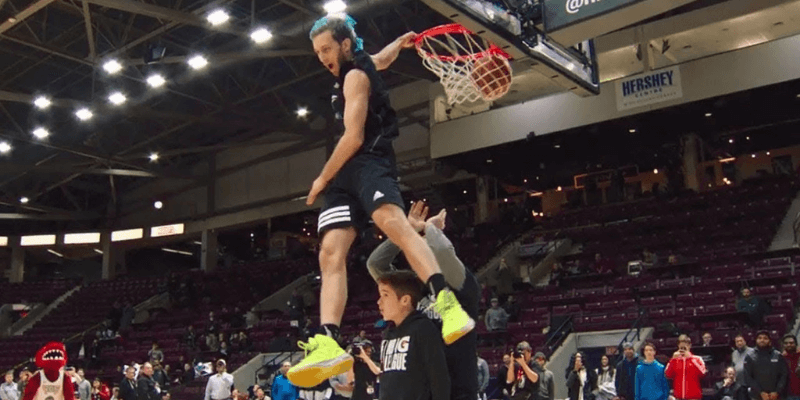 You may have seen a video of Jordan Kilganon, the professional dunker (yes, that’s a career these days, and can be extremely lucrative) that has wowed spectators while breaking the internet with some of his high flying dunks. Right after you pick your mouth off the ground and roll your tongue back into your mouth, you probably have some questions.

Who is this guy? What team does he play for? And, for god’s sake, how high can he jump??!!

If you’re stumped on these details, keep reading. This article will give you a glimpse into the world of Jordan Kilganon, why he is relevant, and how high he can actually jump. We will dig deep to answer the question “What is Jordan Kilganon’s vertical leap?” Enjoy the article and the dunks and try to keep your excitement to a minimum.

In June of 2019, Jordan Kilganon posted a video on his personal Facebook page that says “Tested a 49.5 inch vertical today at dunk camp!” Yes, you read that right. Jordan Kilganon, a relative unknown to most basketball circles, can jump higher than every NBA player to EVER record their vertical leap. Basketball Hall of Famers David Thompson and Wilt Chamberlain both have 48 inch vertical leaps on record and Kilganon beat theirs by almost two inches!

Wait, Who Is Jordan Kilganon?

The story of Jordan Kilganon is very original, and as a basketball fan, almost seems too strange to be true. Kilganon is a professional dunker from Canada who devotes his entire life to creating new dunks and then performing them in professional dunk contests. Kilganon has been training to be a dunker for years but burst onto the national scene at the 2016 NBA All-Star Game coming out of the stands to steal the show with an unbelievable dunk.

As you can see by the reactions of the fans and players alike, Kilganon isn’t your run of the mill dunker. Not only did he perform his famous “Scorpion” dunk, a dunk never performed by any NBA player ever, but he did it in jeans!

Kilganon was from a small town in Ontario, Canada, and played sports in high school, but never had aspirations of pursuing basketball in college or professionally. Kilganon actually admitted in an interview with ESPN, that if he were to play any sport professionally it would be volleyball. He also admits that he doesn’t even really watch basketball regularly, but loves tuning into the NBA Dunk Contest during All-Star Weekend.

So, what motivates a guy who isn’t really even a fan of the game to devote so much of his time and effort to dunking? The story starts when Kilganon was 15, remembering fondly that his only passion was to learn how to dunk. Once he learned, first on an 8-foot hoop, he was immediately hooked. He began working on his craft and trained himself to jump as high as humanly possible while creating some of the most innovative dunks anyone had ever seen.

Some may think this pursuit is odd, but it is paying off for him. Kilganon has never hidden the fact that he was named after arguably the greatest NBA player and dunker ever Michael Jordan, and was surrounded by basketballs and a hoop since a young age. He grew up playing the game but something about dunking specifically overtook his passion for the game as a whole and once he began dunking regularly, his sole focus was learning as many dunks as possible.

How Does He Do It?

Kilganon admits that he wasn’t born with freakish athletic skills. He was, in all intents and purposes, just like “us” when it came to his abilities. He just had the determination, and obsession, to dunk from an early age. This led to his very simple yet effective training regimen of simply dunking as much as possible for hours every day.

Up until recently, Kilgallon didn’t even weight train to build muscle. His routine seems almost too easy, but from a young age, Kilganon would find a height on the hoop that he could dunk on and continue at this height until he built enough muscle to move the hoop up another few inches. He started at 8 feet, then 8.5 feet, and so on, until he could dunk on a regulation 10-foot hoop at the age of 16.

He claims to have dunked every day for 3 to 4 hours! Sometimes in -35 degree weather, sometimes in inches of snow, and other times until four in the morning in the pouring rain. The obsession began paying off when he noticed that he was creating dunks that his friends and teammates had never seen before. He sees himself as an artist and these were the early days of him creating art, only the empty basketball court was his blank canvas.

He now trains smarter than ever, incorporating weights, rest days, and recovery methods into his regimen, but he started this journey by simply dunking, and dunking, and dunking until he literally couldn’t get out of bed. While some may question the pursuit of dunking as a waste of time, they can never question his dedication to the skill.

An Unusual Path to Fame

Kilganon was having trouble gaining traction in basketball circles with his mastered skill, and he wasn’t sure how that would change unless he was given a chance to shine in front of a large group of people, and ideally a large television or online audience. He would soon get both.

He started his journey by sending out dunking mixtapes to anyone that would accept, and one day the right person saw it and fell in love. He began dunking with professionals in LA and was eventually invited to the 2016 All-Star Game where the legend of “The guy who dunked in jeans” was born.

Kilganon now participates in professional dunk contests for money and makes a pretty good living off it. He can’t believe he gets paid to do something he loves, and while it is continuously grueling to his body, he wouldn’t change it for a thing.

Kilganon wows his fans with one of the most impressive dunks ever performed. A 360 dunk is hard enough, but Kilganon adds about 3 more elements to leave people who have seen it speechless. He starts with someone holding the ball up under the hoop. Kilganon runs up to the hoop and leaps, doing a 360 and then grabbing the ball under his legs completes the 360 and dunks the ball. Unbelievable.

Way back in the 1990 NBA Slam Dunk Contest Rex Chapman gave himself a behind-the-back assist while dunking the ball and leaving the fans in awe. Kilganon multiplies that by a million with his Lost and Found dunk where he begins with a 360, and then passes himself the ball behind his back and head in mid-air. From there, he catches it and slams it home with ease. Another unbelievable dunk by the master.

Jordan Kilganon’s 49.5-inch vertical leap is impressive. But that only tells a little bit of the story behind the man so obsessed with dunking that he made it his livelihood. Kilganon is one of the most creative dunkers on the planet and his booked schedule to dunk contests around the world proves that.