What is a Jump Ball in Basketball? 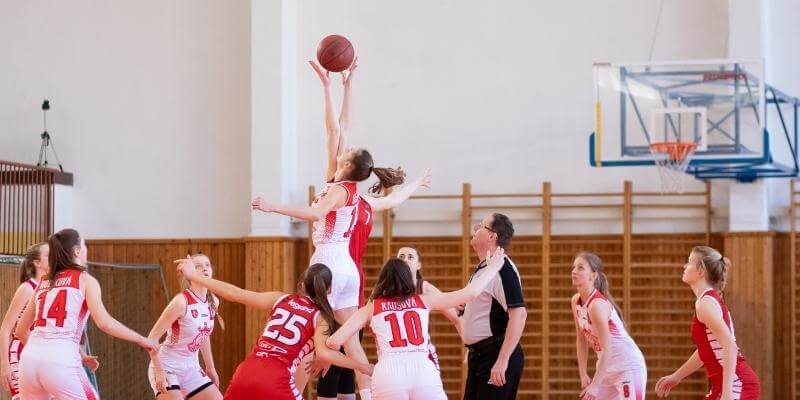 Basketball is pretty straightforward on the surface, but there are many unique rules or interesting scenarios that arise throughout the course of a game. One such occurrence is the jump ball, which only happens at specific moments and for a specific reason.

If you want to understand jump balls, or if you’re curious about the rules that surround them, this article will look at them in further detail. You’ll learn about why they exist in the current game, as well as how they first came to be.

The Rules of a Jump Ball

A jump ball is a method used in basketball to begin or resume play after two opposing players both get their hands on the ball at the same time.

In either situation, two players both having control of the ball simultaneously leads to a jump. When that happens in the NBA, the referee takes the ball and has both players who were fighting for it line up at the top of the key with the other players around them.

The official then tosses the ball between the two players and both jump up for it to try and tip it to their team. Whoever recovers the ball after the jump gets possession and play continues as normal.

Jump balls are also how basketball games begin. At the start of the game (during the tip off) teams have their tallest players line up at half court with the other players around them in a circle. The ref tosses the ball into the air, and both players try to get the first possession.

Jump Balls in Other Leagues

While the NBA and WNBA both use the above rules for a jump ball, other leagues (including both FIBA and the NCAA) use the alternating possession rule instead. In that, both teams are governed by a special possession arrow that first points to the team who lost the opening tip.

If two players tie up, rather than having to actually jump for the ball, the team who the possession arrow points to gets the ball. Then, if another jump ball occurs, it’s the other team’s turn to gain the ball. This keeps switching back and forth throughout the game.

The system is easy to understand, but some people don’t like it because the defense can be punished by causing a jump ball if they don’t have the possession arrow pointing their way. However, those who favor the arrow argue it’s more fair than the NBA’s height-favored system.

The History of the Jump

Basketball is a constantly shifting sport, but jump balls have been around for a long, long time. In fact, the very first game ever recorded in 1891 started with a jump ball, and they were used to determine possession on tie ups since 1938.

However, the idea of a possession arrow did not come about until a bit later in 1981. In that year, the NCAA decided to take out conventional jump balls to add another layer of strategy to the game where both teams would not have to rely on height.

By being able to play to the possession arrow, players on each team could try to change tie-ups from a 50/50 to a turnover. That also gave incentive to teams who weren’t getting possession to go for tie-ups because the next one would be theirs.

FIBA, under direction recommendation from the NCAA, also shifted over to the possession rule in 2003. Even so, they added an extra stipulation. In overtime, the team with the arrow gets the ball to start. There is not another jump like there is in both college and the pros.

While the other leagues have switched, the NBA has said time and time again they don’t plan on changing their jump rules anytime soon. There’s been quite a bit of pushback against their current rules, but the league feels the more conventional jump is best for their product.

The jump ball, both for possessions and tip offs, is one of the most iconic parts of basketball. The referee starting the game by throwing the ball into the air has become synonymous with starting the game, and it’s something everyone can easily recognize.

While jumps during games aren’t as easy to recognize by the casual fan, they are a critical rule that keeps both the offense and defense honest. Regardless if you prefer conventional tips or the possession arrow, jump balls provide an elegant solution to a tricky issue.