How Big are Kawhi Leonard’s Hands? 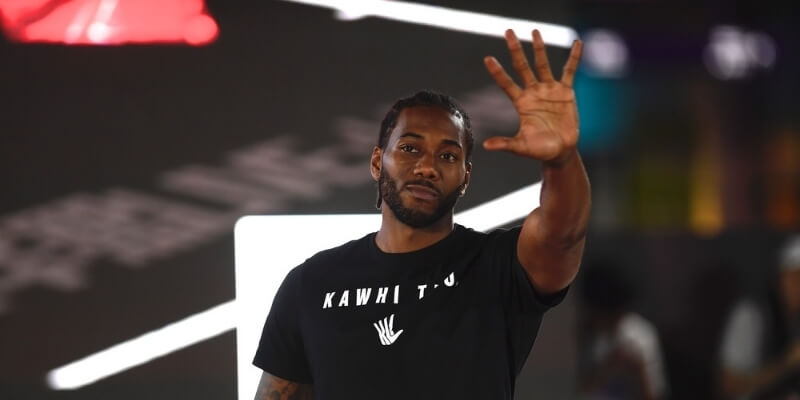 There are many factors that help someone succeed in the NBA. Talent and work ethic are very important, but raw athleticism is a big part of that too. Not just how fast or strong a player is, but the way they are built. That is why so many superstars have such large hands.

I have spent more than twenty-five years enjoying basketball as both a spectator and as a player. I know a lot about the game and spent years covering it. Such experience is what enabled me to outline the information broken down throughout the rest of the guide.

Below, I will look at the size of Kawhi Leonard’s hands. That will not only help explain one of the many reasons why he’s so talented, but it will also give a look into other players to see just how much specific dimensions matter when it comes to becoming an all-star in the NBA.

Keep reading to find out more!

Are Kawhi’s Hands That Big?

To first get into a discussion on hand size, we need to tackle the core question here: how big are Kawhi’s hands? The answer, extremely big. The superstar’s large paws measure 9.75 inches long (from base to finger tip) and are a staggering 11.25 inches across.

To give reference on just how big that is, most NBA players at his position have a hand size that measures 8.8 to 9 inches long (with some extremely special cases measuring 9.5). Kobe’s hands were only 9 inches long, as are Lebron’s.

Going all the way to 9.75 definitely puts Kawhi in his own league when it comes to hand length, and it helps him better grip the ball when going up for a layup or dunk. It also makes stealing and rebounding a bit easier as well.

Where’s Kawhi Compared to the League?

Knowing that Kawhi’s hands are relatively large is one thing, but comparing them to the NBA as a whole is another. The shooting guard stands 6 foot 7. For the rest of the league, players who are that tall have, on average, a hand size of 8.7 inches long and 9.5 inches wide.

Comparing that to Leonard shows just how much bigger his hands are than everyone else he goes up against. The gap gets even more impressive when looking at average point guard hand size (8.4’’ by 8.9’’).

Even centers’ average hand size, 9.7’’ by 10.3’’, is comparable to Kawhi. That’s incredibly crazy and shows just how much of an outlier he is compared to other NBA players.

How Much Does Hand Size Matter?

There is no doubt that Kawhi is a special player. However, how much of his resume is a direct result of hand size? That’s an interesting question, and one that needs a little more context to fully explore.

Of course, Kawhi would not be the same player without his large hands. Not only do they make it easier to palm the basketball (and thus dunk) but they also give him more control when making passes. The larger hands also give him his unparalleled ability to steal and block on defense.

Even so, bigger mitts may not be as big of an advantage as many may first assume. While they do help on the court, grip strength is actually more important.

Most shooting and ball control comes from the fingertips rather than the palm. As such, being able to properly grip the ball when moving through the lane or going for a pass is much more predicated on hand strength than anything else.

The only place larger hands come into play is on the defensive end of the court. Good blockers need more surface area to swat shots away from the hoop, while great stealers (such as Kawhi) have a better chance of sticking their hand into the lane and knocking it away.

In fact, John Stockton, the all-time steals leader, was blessed with particularly large hands. Despite only standing 6’1’’, his hands were nine inches long. That allowed him to pick a lot of pockets during his time in the league.

Who Has the Biggest Hands in the NBA?

Boban Marjanovic, standing at a staggering 7’4’’, has the largest hands in the NBA. In fact, measuring 10.75’’ by 12’’, his hands are the largest ever recorded in NBA history.

How Big are Lebron’s Hands?

Lebron James’ hands, while large, are not overly big. The NBA legend has hands that measure 9 inches by 9.25 inches.

Who has the Smallest Hands in Today’s NBA?

Relative to his height, nobody has smaller hands than T.J. McConnell. The Pacers guard’s hands are 7.5’’ by 7’’. That is incredibly below the average for players who stand at his height (6’1’’).

When it comes to basketball, hand size definitely matters. However, it may not matter nearly as much as you might think. While plenty of superstars have larger hands for their size, there are also many, many incredible players (like Stephen Curry) who have average or small hands.

That being said, Kawhi’s hands have helped him become the player he is today. He’s one of the best dunkers in the league, and a force on defense. Being able to palm the ball may not be the whole equation, but it’s definitely a part of what helped him rise to the top.