How Many Rings Does Kawhi Leonard Have 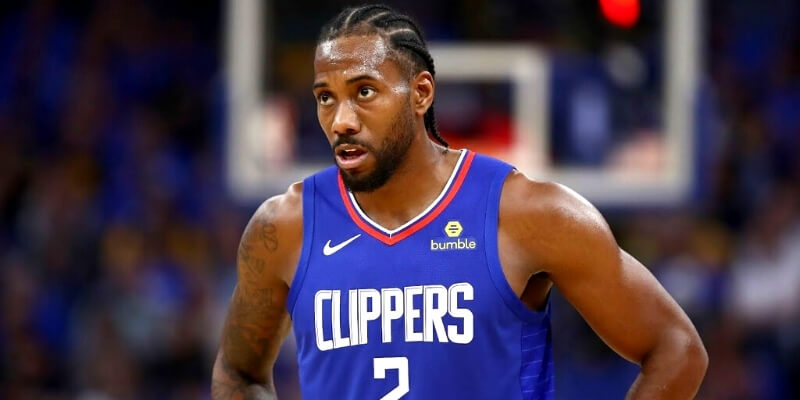 Kawhi Leonard is a great individual player. He’s helped his teams win two NBA championships in his nine-and-a-half-year career. Physically, he’s a freak of nature that can jump out of the building and defend almost any position on the court.

Everything about his game says he’s a title contender. Defense, rebounding, running offense, and being the team’s main scorer are all focal points of Leonard’s championship resume.

This article will touch on Kawhi’s already successful career and highlight the seasons he took home an NBA title.

Kawhi Leonard was a bit of a mystery coming into the 2011 NBA Draft. Nobody could deny his defensive capabilities and athleticism. However, there were questions about his shooting and what position he’d play in the pros (this was a few years before the NBA embraced a more positionless approach to their teams).

He was drafted 15th overall by the Pacers, then traded to the Spurs the same night. Leonard had an encouraging rookie year, finishing fourth in Rookie Of The Year voting, but wasn’t on anyone’s radar of future superstars. He was also stuck behind three of the most accomplished players in recent history: Tony Parker, Manu Ginobili, and first-ballot Hall of Famer Tim Duncan.

He improved in his second season, bettering his scoring average by four points and playing in the 2013 NBA Finals. During the Finals, which the Spurs lost in heartbreaking fashion to the Miami Heat, Leonard averaged 14 points and 11 rebounds.

His third season would change his fortunes for the better. Before the 2014 Finals, Leonard averaged around 11 PPG. From then until now, Kawhi’s scoring average has skyrocketed to 23 PPG. His time in San Antonio was both exciting and frustrating, and he ended up ultimately being traded to the Toronto Raptors.

Many had a feeling Leonard’s time in Toronto was limited. He certainly made the most of it, though, leading the Raptors to their first title in the organization’s history. Leonard is currently the star on the Los Angeles Clippers, where he’s in hot pursuit of title number three.

While Kawhi’s stats in San Antonio aren’t particularly mind-blowing, the Spurs are unique. You have to be the right kind of player to be successful there. Not that Kawhi wasn’t a huge success. However, Spurs coach Greg Popovich praises team success—and some star-minded players don’t gel with a team-first philosophy.

A very different Kawhi played on the Raptors. He was the de facto star, and everyone knew it. While both of Kawhi’s title years showed him at different stages in his career, nobody would deny that he wasn’t one of, if not the best, players on the court.

Rematch: in 2014, the Spurs and Heat saw both teams grit it out during the Finals for seven games. Some would say Miami stole Game 6 just to get to a Game 7; they were eager to see if they could catch lightning in a bottle twice.

Kawhi had a good year but was still only scoring around twelve points per game heading into the playoffs. The first three rounds of the playoffs were more of the same from him—but something clicked in the Finals. The first two games of the series weren’t much different as he scored 9 points in each game, although he shot the ball well from three. Between Games 3 through 5, Leonard averaged almost 24 PPG and stole the show.

Not only did Leonard score almost at will during Games 3, 4, and 5, but he was efficient in his efforts. He shot 60% from the field, rebounded the ball well in Games 4 and 5, and guarded LeBron James during the series leading to being named Finals MVP.

The next four years in San Antonio ended in disappointment. The big three of Tim Duncan, Manu Ginobili, and Tony Parker were getting older. The rest of the team, minus Kawhi, wasn’t ready to step in and compete for a title. By 2018, there was dissension between Kawhi and the organization over the alleged mishandling of an injury. Leonard requested to be traded from the team.

While it wasn’t a good look for Leonard at the time, things worked out for him less than a year later.

The 2018-19 Raptors swung for the fences when they traded one of the franchise’s most beloved players in DeMar DeRozan for Kawhi Leonard in the offseason. But Leonard, along with Kyle Lowry, Marc Gasol, and the emergence of Fred VanVleet, was hungry for some long-overdue success.

They beat Orlando with ease in the first round—but ran into some trouble in the Conference semis and finals against the 76ers and the Bucks. Philadelphia took them to Game 7. It looked like 7 would go to overtime until Kawhi’s last-second shot hit every inch of the rim before falling in for the series win.

Milwaukee was a huge test, too, jumping out to a quick 2-0 series lead before the Raptors ripped off four straight victories. The Finals pitted them against a depleted Golden State Warriors team who had just lost their best scorer, Kevin Durant, to injury. Toronto had luck on their side during these Finals, but they also played well enough to take control of the series after four games.

Toronto Raptors Kawhi was nothing like 2014 Spurs Kawhi. He averaged 30 points over the entirety of the 2019 playoffs; he was the best player on the court in almost every game he played. Even with a couple of hiccups, the Raptors handled their business and beat Golden State in 6 games. Leonard won Finals MVP—but the honeymoon with Toronto wouldn’t last long.

The next season, Kawhi was in LA playing for the Clippers. He still wears the Clipper uniform after one disappointing season and is looking to build a title team similar to what he had in Texas and Toronto.

The Clippers are a very talented team—but they’re also snakebit by their dismal history. In 50 years, the Clippers have only made the playoffs 15 times, and they’ve never made an NBA Finals. To say Leonard has an uphill battle ahead of him is an understatement. But he has some help in All-Star Paul George, and owner Steve Ballmer hopefully can get the job done and hand Kawhi his third ring. Time will tell.

Kawhi Leonard is one of those rare players that can carry a team to an NBA title—just ask the city of Toronto. But he has made a couple of questionable decisions in his career; some wonder if his move to LA hurt his chances of getting another ring. If anyone can make the most of a different situation, though, it’s Kawhi Leonard.

Are you a Kawhi Leonard Fan? What is your favorite part of his game? Let us know in the comments section!