KD vs. LeBron: Who is Better 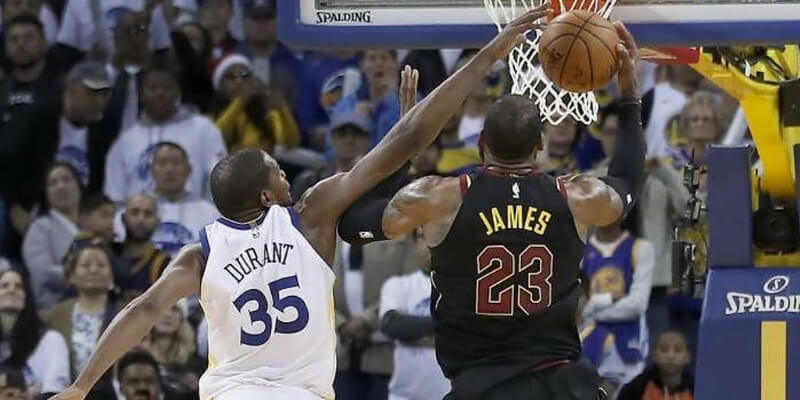 LeBron James—often listed as one of the three greatest players in NBA history, along with Michael Jordan and Kareem Abdul-Jabbar. However, Kevin Durant may have a bone to pick with them. KD and Lebron faced off in two straight NBA Finals—and both times, Durant came out victorious. To make things worse, KD picked up two Finals MVPs against King James. Kevin Durant’s spot among the greatest may be closer than we think.

But who’s really better? These debates are fun among friends—but when they drive media narratives, it can make or break a player’s reputation in the context of NBA history. Player comparisons can be tough. Statistics are invaluable, but they don’t tell the whole story. Let’s have some fun with this and decide who’s the greatest: Kevin Durant or LeBron James.

After one of the most impressive freshman seasons in NCAA history at the University of Texas (26 PPG and 11 RPG), Kevin Durant entered the NBA with stratospheric expectations. Luckily for basketball fans, Durant has lived up to the hype. He was drafted in 2007 by the Seattle Supersonics and won Rookie of the Year, scoring twenty points per game and grabbing four rebounds during his first season.

Durant epitomized the modern NBA player—athletic, almost seven feet tall, can handle the ball and shoot from the three. After his rookie campaign, his team moved to Oklahoma City and drafted Russell Westbrook. In KD’s third year, he put up thirty points a game and made his first of ten All-Star appearances.

The Thunder surprised the league making the NBA Finals in 2011-12 before falling to the Miami Heat—led by LeBron. They were always competitive but never made the Finals again, and Durant signed with the Golden State Warriors in 2017. Two straight NBA Championships and Finals MVP awards later, some considered KD the best player in the league.

An Achilles injury, and the COVID-19 pandemic, have sidelined him for the past year and a half, but Durant has a new team—the Brooklyn Nets—and he’s picked up right where he left off. He is currently second in the league in scoring.

Based on the last seventeen seasons, LeBron James has accomplished what nobody has in league history. Sure, Jordan and Kobe played at a high-level until retirement—but LeBron is one of three odd-on favorites for winning the MVP award this year, in season seventeen. He was hailed as basketball’s savior during his junior year of high school in 2001 and has exceeded the media’s lofty (probably unfair) expectations.

LeBron burst onto the scene in high school and was already a household name, with his high school games being televised in primetime on ESPN. He skipped college and was drafted first overall in the stacked 2003 Draft. James was taken by his hometown Cavaliers, where he played for the first seven years of his career, winning two of his four MVP trophies and a Finals appearance.

James joined the Miami Heat in 2010, teaming up with Dwyane Wade and Chris Bosh. The Heat created a superteam, and James—the NBA’s darling—became a villain around the league. The move to Miami was a great business decision, as the Heat made the Finals each of the four years James was there, winning two titles in the process. LeBron won two MVPs in Miami, bringing his career total to four.

He then went back to Cleveland for another four Finals appearances, capturing a ring with the Cavs in 2016. He went from villain to hero in Cleveland, bringing them their first professional sports title in over fifty years.

The last stop (we think) in his basketball journey is sunny Los Angeles. James joined the Lakers in 2018 and has only continued to excel on the court. He is almost averaging a triple-double with LA, which is absolutely unprecedented in nearly any sport (Hi, Tom Brady!). Oh yeah, he also won a title for the Lakers in 2020 and continues to dazzle on the court—nineteen years after joining the NBA.

The KD vs. LeBron debate seems like an easy slam dunk for King James. But when their teams met in back-to-back NBA Finals, Durant looked like the superior player. Granted, he was in year ten and eleven of his career while LeBron was three years on, but he was still playing at an all-time high level.

They’ve played against each other thirty-five times during their career. James holds the better overall record at 20-15. However, Durant has him beat in the playoffs with a 9-5 postseason record.

While stats don’t always tell the whole story, they can shed light on some of the most important factors we’re looking at here. So let’s dive in and see what the numbers say.

Their career numbers are almost identical. Over a twelve-plus-year career, Durant is currently averaging 27.1 PPG, while LeBron is at 27.0 PPG. Such a small difference—and they are both clutch down the stretch when their team needs a bucket. They’re both career 50% shooters, but Durant has the edge behind the arc; many consider him one of the greatest offensive forwards ever.

This category is a no-brainer. LeBron James currently averages three more assists per game than Durant. Two years ago, James averaged 10 assists per game while scoring 25 points a night. Not only does LeBron average more career assists than Durant, but he’s one of the three best players ever in this area. Check out this 20-minute(!) highlight reel devoted exclusively to LeBron’s court vision. Unbelievable.

Here’s another statistical category where James and Durant are almost identical—they both rebound fairly well. Durant does have a couple of inches on LeBron, but James carries around forty more pounds than Durant; their physical attributes cancel each other out here. Over their careers, KD actually has a slight advantage over LBJ on the offensive glass. Still, I’m hard-pressed to pick KD over James in this category.

During the 2017 and 2018 NBA Finals, Kevin Durant and LeBron James spent a good chunk guarding each other. Durant’s length bothered LBJ during the Finals matchups. Durant also had a LOT of help on the offensive end, though, with LeBron carrying the heavier load for his team overall. The individual accolades should be mentioned here, with James being named All-Defense six times to Durant’s zero All-Defense nods.

While Durant can play good defense, his body sometimes hinders him when it comes to guarding. However, James can guard anyone on the opposing team at any time of the game, making him more versatile and dangerous to opponents. He is a physical freak who can body a big man out of the paint or run down a fast break for a highlight-reel block.

Based both statistically and on my own eye-test, LeBron James is the better all-around player. This is no slight to Kevin Durant. Personally, I think LeBron is the greatest player ever. He’s the most versatile player to ever play, and his durability has helped him avoid career-threatening injuries.

Durant is a guaranteed bucket but doesn’t get the results in other facets of the game, especially defense and passing. He can guard and pass the ball, but not at LeBron’s level. Points matter, but basketball is about more than that—and LeBron is the greatest to ever do it, in my opinion.

LeBron vs. KD: Who ya got? Let us know in the comments below!