What is Kevin Durant’s Wingspan and Hand Size? 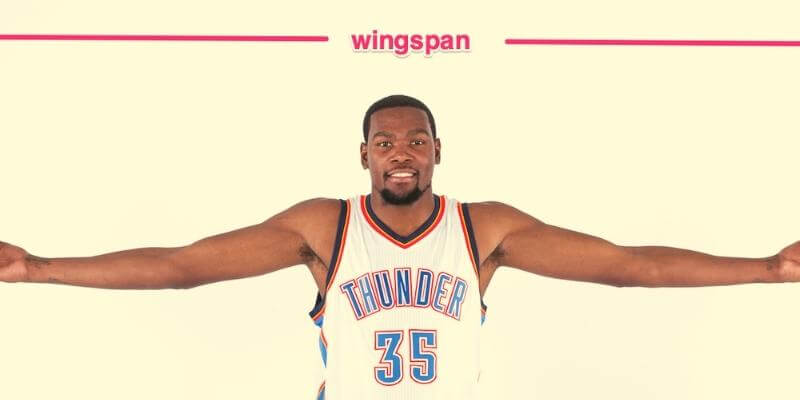 Kevin Durant is one of the most dominant offensive players of all time. Some claim that his defense is elite too, but when his career finally ends, KD’s legacy will be his silky smooth offensive game.

One of the main reasons that Durant is so dominant is because he is a shooting guard trapped in a center’s body. He gets so many shots off over his opponents because of his freakish wingspan, which is 7’5 (2.26m) long!

Although his arms are long, Durant’s hand size does not match the rest of his body. In fact, KD claims that he can’t even palm a basketball! This small detail (no pun intended) of Durant’s body may actually benefit his unstoppable game.

More on that, and all things wingspan and hand size in this article so stay tuned!

What Is Wingspan And How Do You Measure It?

As a child in the late ‘90s, my room was covered with basketball posters and magazine cutouts. My favorite image of all, however, was the iconic Michael Jordan “Wings” poster.

The poster was a black-and-white image of MJ spreading his arms out to the side as far as he could. Unlike most posters which were vertical, the “Wings” poster was horizontal. And it was looooong! Why? Because of Jordan’s wingspan!

Wingspan is the distance between a person’s fingertips if they reach out to their sides as far as they can.

To measure your own wingspan, stand completely upright without bending or twisting your body. Now, hold both arms out to the side (like MJ is doing in the “Wings” poster) with your hands stretched out. The distance from the fingertip to the opposite fingertip is your wingspan. Simple right?

There is a ratio in the human body that finds that a human’s height is usually the same measurement as their wingspan. So, if you are six feet tall, your wingspan will fall right around that length too.

Did you know that the average adult male hand is 8.5 inches long? Length isn’t the only measurement for hands, but it is safe to say that while KD’s hands are small in relation to his NBA peers, he is definitely above average. Speaking of hand measurement, it is a bit trickier than wingspan.

Hand size comes down to three important measurements: length, breadth, and circumference. The length is gathered by measuring the distance from the tip of your longest finger – typically your middle finger – to the crease under your wrist.

Breadth measures the widest area where your fingers meet your palm. And circumference measures around your palm on your dominant hand just below the knuckles.

Read: 8 Players with The Biggest Hands in the NBA

Now that you have a better grasp of how these are measured, let’s discuss Durant’s measurements.

On the Brooklyn Nets roster on NBA.com, KD is listed at 6’10”. Seeing as that the normal wingspan measurement usually equals a person’s height, the fact that Durant’s wingspan is six inches bigger is impressive! Or is it?

Let’s take a small detour and discuss the saga of Durant’s listed height and his actual height.

When Durant came into the league, he was listed at 6’9”. Quickly, fans and media personalities knew something was up.

In a lot of cases, NBA players will fudge their height to be smaller than they are for a small edge against other teams’ scouts. Even at 6’9”, Durant’s measurements seemed awfully suspect.

There are pictures – like the one above – that show Durant the same height, or taller than guys in the league who have a bigger listed height. Here he is standing next to DeMarcus Cousins and DeAndre Jordan – who are 6’10” and 6’11”, respectively – and he seems to be in line with them height-wise.

So, just how tall is Durant? Well, let’s go straight to the source: Durant himself!

So there you have it. Kevin Durant is a seven footer (with shoes on) making his 7’5” wingspan impressive, but not as freakish as it would be if he were truly 6’9”.

While KD admits that he doesn’t know the exact measurements of his hands, he can’t palm an NBA basketball. He said that he can palm a high school and college ball, but not the one he built a Hall of Fame career with.

Does it matter that Durant can’t palm a basketball? Not really. There are obvious advantages in palming a ball – better control of the ball is the big one – but are there any disadvantages?

For me, one does come to mind.

Shaq and Wilt Chamberlain are some of the largest players ever to grace an NBA court. They were dominant in almost every aspect of the game…except shooting. Chamberlain admits that a big component of his poor shooting was the fact that his hands were too big. Imagine shooting a tennis ball at a basketball hoop. That was shooting to Shaq and Wilt.

Durant’s hands aren’t supersized and that gives him a big advantage over other seven-footers. For a player his size, he has brilliant coordination and feel for the basketball. I wonder if he would have the same feel if his hands were more proportional to his body measurements.

The things Kevin Durant can do on the basketball court in his body makes him a physical freak. KD is one of the, if not the, best scorer in NBA history and his wingspan is just one of the factors that sets him apart.

Even though Durant’s hands are “small”, he is still a physical specimen. His hand size may be a key factor to his increased coordination and control of the ball.

No matter what his measurements are, it is pure joy to watch Durant cook on the basketball court.

What is your favorite Kevin Durant season? Let us know below in the comments section!