Kentucky Players in the NBA 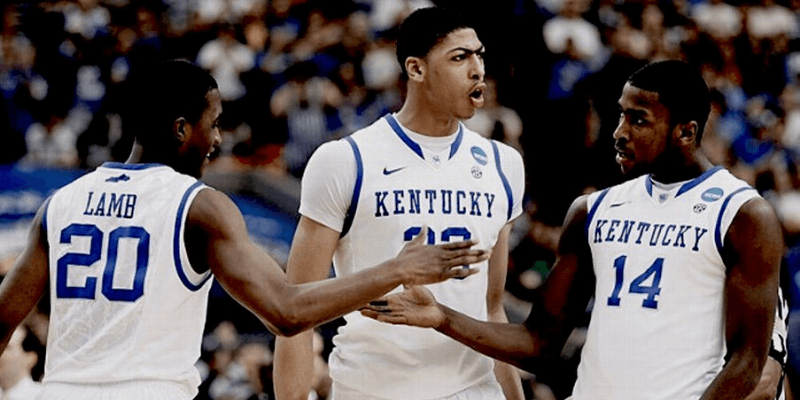 The Kentucky Wildcats are one of the winningest programs in the history of college basketball. Their dominance dates back to the hiring of Hall of Fame coach Adolf Rupp and their success never really faltered for more than a couple of stray seasons since their first title under Rupp in 1948.

After Rupp retired in 1972, they were taken over by another legend in Joe B. Hall and won several more NCAA titles. In 1989, Rick Pitino took over and brought Kentucky out of a dark scandalous period and brought them to three Final Fours and one NCAA title in 9 seasons. Tubby Smith took over after Pitino and brought the school another title and then in 2009, they landed their dream coach in John Calipari.

To say that Kentucky is a successful program would be the ultimate understatement. They are currently first among all Division 1 schools in total wins ever and best win percentage in NCAA Division 1 history.

Not only has Kentucky been successful on the collegiate level, but they have also been very good at preparing their players to play at the next level. Since the NBA began in 1947, Kentucky has had around 140 players drafted.

Current Kentucky Players in the NBA

Their history of developing their players for the next level is widely regarded among NBA circles, but how about their current output of Kentucky players in the league? As of the opening night of the 2019-20 season, there were thirty-one former Kentucky players on an NBA roster.

You will notice I said, “former Kentucky players” instead of “Kentucky alums” in the league. The reason behind this is that coach John Calipari has mastered the recruiting tool of bringing in players whose intention is never to stay at the school for four years and rather utilize the experience as a stepping stone to the NBA. The biggest reason behind this recent phenomenon is the NBA’s minimum age rule where players must be 19 before being eligible to play.

This is a loophole that Calipari embraced as a coach and used it to his advantage for the past decade. He figures that while these young men have to play somewhere until they turn 19, it might as well be at Kentucky. He uses this as part of his recruiting pitch and does so with great success rate.

Notable Kentucky Players in the NBA

Let’s take a quick look at some of the most notable former Kentucky Wildcats that are making a big name for themselves currently in the NBA. There will probably be some notable stars that I miss or gloss over due to the simple fact that Kentucky is really good at producing talented NBA players!

No list of current NBA players can start with anyone but “The Brow” Anthony Davis. Davis is one of the league’s most dominant players and his current Laker team is one of the top 3 teams favored to win the 2019-20 NBA title. Davis had a tremendous one year stint at Kentucky, leading his Wildcat team to a 16-0 record in the SEC and a 32-2 overall regular-season record before heading into that year’s NCAA Tournament where they beat Kansas for their 8th title.

Davis was a part of a historic Kentucky team that not only won the National Title but produced big results on NBA Draft night. Kentucky set a record for most players drafted in the 2012 NBA Draft, having Michael Kidd-Gilchrist, Terrence Jones, Marquis Teague, Doron Lamb, and Darius Miller join 1st overall pick, Davis all drafted.

Davis’ dominance didn’t stop after college. He has since put up All-NBA numbers in seven of his first eight seasons posting career averages of 24 points, and 10.4 rebounds over 8 years.

Adebayo is a somewhat unlikely person on this list but has put up All-Star level numbers as one of the leaders of the 2019-20 Miami Heat. Adebayo was a reasonably good player at Kentucky but was drafted more on his potential than his actual results. He averaged a pedestrian 13 points and 8 rebounds in college and came into the NBA as a projected role player.

After a decent rookie and sophomore seasons, his current third season has acted as his coming out party. He is averaging 16 points and 10.5 rebounds this year and was selected for his first All-Star game while helping cement the Heat as title contenders for the 2020 NBA Championship.

Devin Booker has always had a knack for scoring the basketball. His announcement to sign with Kentucky coincided with other high-level high schoolers that helped make Kentucky’s 2014-15 recruiting class one of the best in the country. That year, Kentucky also signed future, and current, NBA talents like Karl-Anthony Towns and Tyler Ulis.

After Booker’s award-winning year at Kentucky, where he averaged 10 points per game and shot over 40% from three-point range, Booker decided to enter the NBA Draft and was selected thirteenth overall by the Phoenix Suns. Booker has been one of the only bright spots on a Phoenix Suns team still trying to form an identity in the NBA.

Sadly, Booker has yet to be selected to an All-Star team despite averaging 25 points in the past four years and hovering around an overall field goal percentage of 50%. This year, Booker is posting career highs in points per game while working hard on his offensive efficiency and defensive game in order to build a contender in Phoenix.

Towns is one of the best centers in the NBA today and the score first mentality came from his time at Kentucky under Calipari. Towns’ freshman year at Kentucky was a bit unorthodox as they were using what Calipari called a “platoon system” with his players. Why was he limiting his players’ minutes that year? Because the team was so talented that he had the luxury to go ten, sometimes eleven-deep with the 2015 team.

After Towns’ successful freshman year at Kentucky, where the team broke a school record for total wins and made it all the way to the Final Four, Towns entered the NBA Draft and was selected first overall. He excelled in his first year in the league, winning the 2015 NBA Rookie of the Year award. He has since been named to his first All-NBA team and is a 2-time All-Star. His career averages are astounding, scoring over 26 points and grabbing 11 rebounds per game.

The Kentucky Wildcats are the gold-standard for producing NBA-level talent. The program, and mostly Coach Calipari, have received some blowback as to how they recruit and field teams as some feel the one-and-done model takes away from the sport’s amateurism, but no one can argue with their success.

They are already ranked first overall in terms of recruiting for next season in 2021 and don’t show any signs of slowing down until the NBA decides to change the age requirements for entering the league. Until then, look for Kentucky to continue to churn out top-level young players that end up making a huge splash in the NBA.

Who are your favorite Kentucky players in the NBA right now? Let us know below in the comments!

I want Anthony Davis for real! They will win a chip right now!