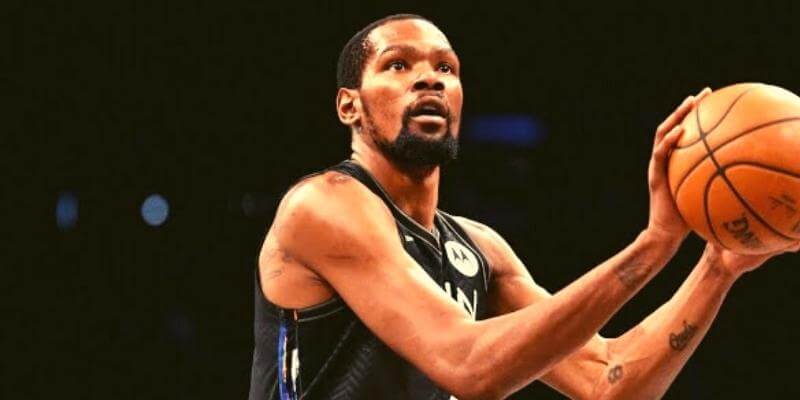 All NBA players are tall. However, for years both fans and organizations know that they like to embellish their height. Not only do players give themselves a few extra inches, but their team’s official listings do as well.

Sometimes though, a player says they’re shorter than they are. That’s the case with Kevin Durant, who spent years cutting a few inches from his peak.

In this article, I’ll explore why he did that, show you his real height and use it to look at the heights of other players all around the league, throughout the following sections.

The NBA, as well as lower leagues, have had a height issue for a while now. Though many players’ true heights are known, they lack the transparency you’d see with other measurements. Many athletes only give themselves an extra inch, while some give themselves a few.

The reason behind that is twofold. First, height matters a lot for scouting purposes. If a player is in high school (and sometimes college) and wants to get noticed, they’re likely to say they’re bigger than they are. That’s also true for weight, but height simply matters more.

Besides highlight reels and stats, dimensions are the only things scouts have to go on. As such, if a player says their 6’5 versus 6’3, they can get looks they wouldn’t normally get. On top of that, if a team lists a player as taller it can help their trade value or mess up scouting reports.

Not Quite Seven Feet

There are many reasons players like to say they’re a bit taller than they are, but Durant is the exception. The sharpshooting small forward didn’t say he was taller, he said he was shorter. A lot shorter.

When he came into the league, Durant told everyone he was 6’9. Everyone who knew him or saw him against other tall players, could tell he had a few extra inches. That came to reality almost a decade later, when he admitted to being almost 6’11.

Since I love you guys so much, I was recorded at 6’10” and three quarters with no shoes, so with my shoes I’m seven feet.

That’s a pretty big discrepancy. Sometimes it’s incidental, but in Durant’s case it was very intentional. That was for two reasons. One, he wanted teams to see him as smaller. While most players want organizations to be impressed with their height, Durant went the opposite way.

That’s because at the time he got drafted, Durant felt like nobody would take him seriously as a small forward at 6’10 or 6’11. A 6’8/6’9 small forward is something NBA teams will accept, but Durant was worried if he listed as taller teams would put him down in the post.

His ploy worked. Not only did he get to play out on the wing, but he quickly got a reputation as a pure outside shooter. He’s ridden that reputation to this day.

On top of that, he thought it’d be cool to lose a few inches on his height. He liked the way 6’9 sounded for a small forward. He thought if he said he was bigger, it wouldn’t carry the same weight with fans, teams, and media.

Unfortunately, while Durant happily went as 6’9 for most of his career, the truth finally came out in 2019. That’s because, due to the sheer amount of fake heights, the NBA decided to implement a tough crackdown on measurements with a new protocol.

Everyone in the league had to be remeasured, and they had to do it without wearing shoes. That cut out guess work, and made it much harder for teams to crunch the numbers. During that time, Durant’s real height finally came out as just shy of 6’11.

He wasn’t the only player to gain a few inches, but most players went down. The only ones who lost any significant amount of height were, quite predictably, big men. Durant’s move goes against common sense, but it’s not something unique to the current NBA.

He’s far from the only professional basketball player to cut inches off his height. In fact, a few other big players pulled something similar. The most famous of those cases was Bill Walton, who always said he was 6’11 during his entire career despite being much bigger.

That’s because at the time he played he felt people would judge him for being over seven feet tall. Like Durant, he didn’t want people stigmatizing him for his height. The smaller down he went, the more freedom he had on the court in terms of positioning.

Kevin Durant is one of the tallest small forwards to ever play the game. He also lied about his height for years. While that’s not what most professional basketball players do, it worked out. He has had a hall of fame career, and managed to do it all from the wing.