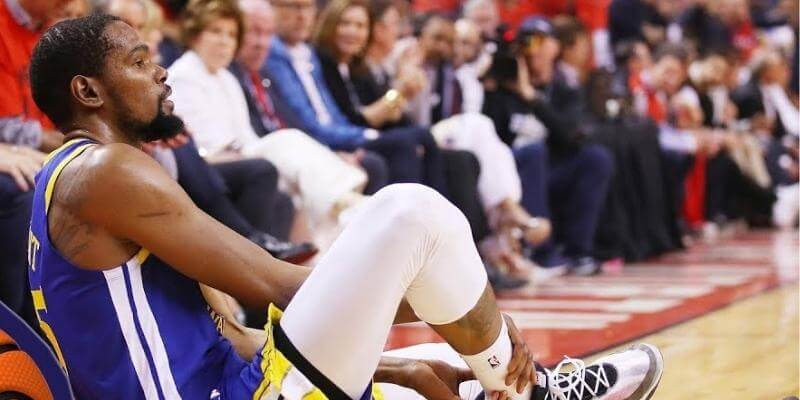 Nobody wants to get injured, but for pro athletes that’s a part of sports. Just about every player undergoes recovery at one point or another. That’s especially true for those in the NBA. The league is extremely demanding, and even the best of the best get hurt every now and then.

The following article covers such issues by studying Kevin Durant’s personal injury history. While the small forward isn’t the most injury prone player in the league, he’s definitely had some costly setbacks during his time at the top.

Durant is one of the taller players in the league (6’10 in height), and he’s always played at the guard position. That combination made him one of the most lethal scorers in the NBA, but it also put a lot of stress on his body that most outside players don’t have to deal with.

Being that tall at such a demanding position always comes at a cost. For most big men, it’s their feet or ankles. Durant’s no exception. When he first got drafted many experts worried that his legs wouldn’t be able to support all of the jumps, cuts, and running that comes in the NBA.

However, as with so many great players, he proved everyone wrong. Durant is not someone who suffered many ailments early on. In fact, he stayed relatively healthy throughout the first seven years of his career.

His body adapted to the NBA quite well. Though his feet were a big source of concern, he didn’t have any lasting issues besides sitting out a game here and there. That helped him build his career and created the legacy he has today.

While Durant took a few games off each season to mitigate his workload, such breaks never lasted too long. They were also few and far between. Still, his body started to break down in a much bigger way going into his seventh season.

His first big injury came in 2014, when his foot finally gave out on him. In October of that year, just as the season started, he suffered a Jones fracture in his right foot that required surgery. It was the third surgery on his foot in six months, and threatened to derail his career.

Fans were extremely worried that the shooting guard wouldn’t be able to bounce back from going under the knife. He did come out of his recovery with no lasting issues except residual soreness, but he soon underwent a bone graft surgery that took him out for the rest of the year.

After his major surgeries, Durant recovered extremely well. He had a fantastic season the following year, and almost made the Finals. 2016, unfortunately, was another story.

During his first season with the Warriors, he suffered a grade 2 MCL sprain as well as a tibial bone bruise in his knee. Many believed the dual injuries would end the shooter’s season, but he only ended up missing 19 regular season games before capturing his first Finals win.

As with most players, Durant’s injuries began to stack up as his career went on. After taking home back-to-back championships with Golden State, it looked like the future hall of famer was well on his way to a third straight title. That changed in the second round of the playoffs.

While facing off against the Rockets, Durant suffered a calf injury that took him out for nine games. He came back during Game 5 of the Finals, but he didn’t even get to play the entire game before an Achilles heel injury sidelined him for the entire 2020 season.

His surgery went well and he came back stronger than ever, but it took quite a long time for that to happen. He sat out for 552 days before finally getting onto the court for the Nets.

He led the team in stats, and brought them back to the playoffs. Even that was relatively short lived. Despite his high level play, Durant suffered another setback when a nagging hamstring issue would not go away.

He would go on to miss more than half of the regular season. The Nets did a good job of playing without him, but there’s no doubt they would have been a much more complete team if Durant managed to keep healthy or stay ahead of his lasting issues.

Durant is not a player that many would consider injury prone. Though he sits out every now and then, and while he’s dealt with a few minor issues during his early years, it’s only in more recent seasons where he started to miss large chunks of time.

While it’s unfortunate such issues happened during his years building the Warrior’s dynasty, he is still lucky compared to most other pros. Not only that, but despite his recent setbacks, he’s bounced back on the Nets in a big way and helped turn the franchise around.