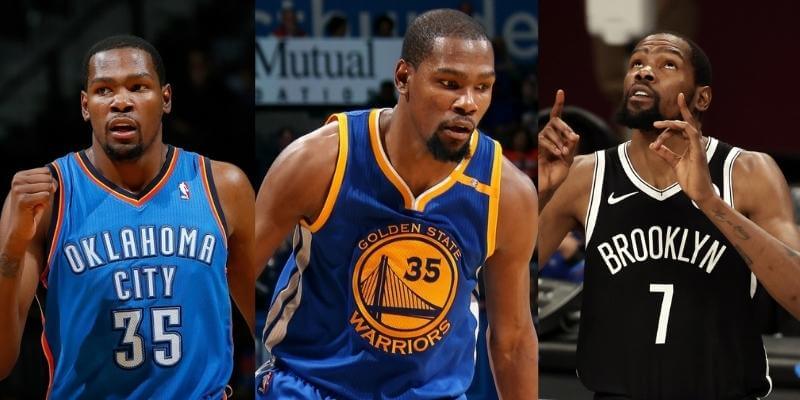 For some players, a jersey doesn’t matter. They get what their team gives them and they roll with it for their time with the organization. For other players, it’s incredibly important. Many athletes choose their jersey number for a specific reason that resonates in their own life.

Here, I will look at the two different jersey numbers (35, 7) Kevin Durant has worn throughout his career. That breakdown will look at why he chose each one, and provide extra insight into some of the events that helped shape his career.

For a long, long time Kevin Durant donned the number 35. It’s what he wore while playing for Texas, it’s what he wore when he first came into the league with the Sonics, and he continued to wear it through both his Thunders and Warriors campaigns.

The number became such an important part of his identity, that he even has it tattooed on his back alongside some of his other more creative images. That much emphasis on the number shows it means a lot to him, and reveals that it’s more than just a jersey.

Durant wears 35 to honor his late AAU coach, Charles Craig. Craig, who served as a mentor to Durant and helped further his basketball career, was unexpectedly shot at the age of 35. That is why Durant chose to wear that number when he came into the NBA.

The number 35 had deep meaning to Durant. Even so, he recently switched over to the number 7 when he left the Warriors to go to the Nets. That was not a decision he made lightly, but it’s something he decided to do when going to the next phase of his career.

After the Warriors decided to retire number 35, he felt it was time to distance his years with the team and start new in Brooklyn. He had plenty of options, but eventually settled on the number 7 due to its connection with the Bible.

Durant is incredibly devout, and his religion is a big part of his life. He mainly honors his faith through his tattoos, but his new jersey number does it as well.

The number 7 stands for completion in the Bible, marking the day when God finished creating the universe. As such, Durant honors that number on his jersey whenever he takes the floor.

Durant is not the only high-profile player who puts a lot of stock into his number. There are plenty of other NBA players who wear something in order to honor a friend, family member, or to reflect a personal belief.

Jordan, who famously wore 23, did it in reference to his brother, who wore 45. He took that number, divided it in half, and then rounded up to get his own. Daniel Lillard rocks the number 0, as a tribute to both his birth city (Oakland) and the state he now plays in (Oregon).

Beyond that, Stephen Curry wears 30 because it’s the same his dad wore, Dwayne Wade wore 3 as a nod to the Holy Trinity, and Dirk Nowitzki wore 41 as a flipped version of his personal favorite number, 14.

There are many players who don’t care about what number they wear, but Durant is not one of them. Both 35 and 7 have a ton of meaning, with each representing a different mindset or part of his life.

He loved wearing 35, and it was a big part of his early and middle career, but 7 has a new focus for him. It’s likely what he’ll wear during the rest of his time on the Nets, and it’s likely the number he’ll eventually retire with.