What Position Does Kevin Durant Play? 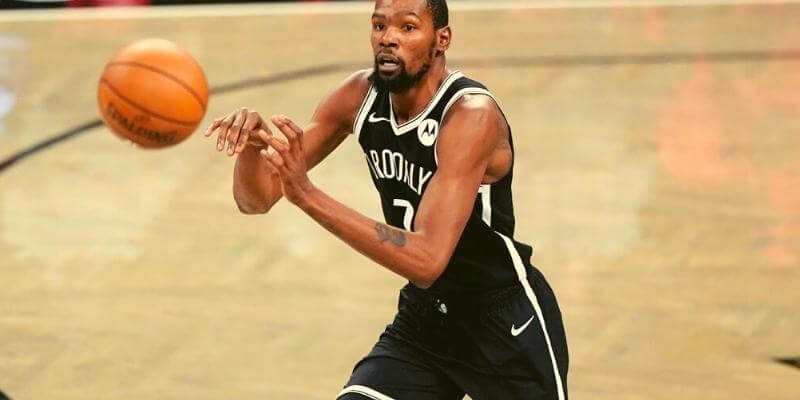 The NBA is a league that goes through phases. Sometimes coaches want quick players that can stretch the floor, sometimes there’s an emphasis on height, and sometimes everyone wants stars. Currently, the league is all about blending positions.

Kevin Durant is a small forward in position, but he also plays power forward from time to time.

The following article breaks down the position Kevin Durant plays, as well as the different roles he’s occupied throughout his career. Such analysis will show how he’s adapted his game over time, and provide a look into how the NBA’s changed since his draft.

Bigger than the Rest

Durant is an extremely unique player. While many athletes have had his ability to shoot, play defense, or score, it’s rare to have all three. Not only that, but it’s even more obscure for someone to pack all of those attributes into such a large frame.

The all star clocks in at 6’10. He’s incredibly tall and has long had one of the widest wingspans in the league. As such, many people find it surprising that he plays small forward. Where most athletes his size would go down on the block, he developed a quick drive and lethal shot.

By being able to score from the outside, Durant separated himself from other big men. He also generated a great triple threat, which allowed him to rapidly blow by smaller defenders through a combination of speed, power, and weight.

A Forward as Well

Though Durant has almost always been a swiss-army knife of a small forward, he’s adopted the power forward role from time to time as well. That’s not his forte, especially because he can’t make use of his shooting down on the block, but it makes use of his extra size.

Getting to make use of Durant’s height and wingspan is a big help for a lot of offensive schemes. He can cause problems inside, and then use his basketball IQ and court vision to kick the ball out for a key pass.

Another reason he developed the ability to go down low is due to his defense. His incredible length and height make him a stellar rim protector. He’s great at blocking or contesting shots too. Each of those skills allows him to match up against bigger players when it’s needed.

Too Tall, Too Big, Too Fast

Durant is a large player in any position, but he’s especially big on the wing. That is one of the reasons he’s been so successful. No matter who he’s up against, he has the size advantage.

Currently, the average height and wingspan on NBA small forwards are 6’7 and 6’10 respectively. Durant, who clocks in at 6’10 and has a wingspan of 7’5, blows both of those out of the water. He’s a menace on defense, as well as a force in and out of the paint.

In today’s NBA, there are many large players taking on different roles. All players are getting both taller and bigger, and they’re doing so without losing any quickness. Shooting is also better than ever. In that way, there are larger players stretching the floor like never before.

Nikola Jokic is a 6’11 center capable of passing and shooting from deep, while both Giannis and Ben Simmons are over 6’10 and run the point. Doncic is a large point guard (6’7) as well.

Looking at that, it shows that Durant was ahead of his time. Big players with great shots and maneuverability are incredibly popular right now. He’s always been ahead of the NBA. The league is finally catching up.

Durant isn’t just one of the best players to ever step on an NBA court, he’s also one of the tallest guards of all time. Though he has switched up and taken over as a big man every now and then, he’s truly a great shooter who’s style few players will ever be able to match.