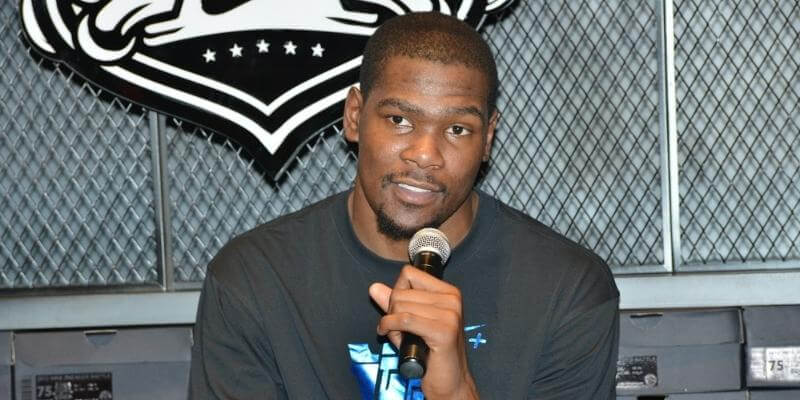 Many know Kevin Durant as one of the top NBA players of his generation. He is freakish in his basketball build – seven-footer with handle and the smoothest shooting stroke ever? – and has the heart of a champion. Nicknamed the “Durantula” (like the killer spider), KD has the killer instinct to put teams away, and he has been known to stick the dagger in opponents’ hearts with a late three.

While Durant is a superstar, he is also very thoughtful and well-spoken in interviews. He has certainly put his foot in his mouth at times (remember his burner Twitter account scandal?), but when he speaks people listen.

Join us as we remember some of KD’s most famous quotes over the years.

In 2014, Kevin Durant was coming off of his best season in the NBA. He had just won the MVP Award and was giving his speech when an emotional moment between him and his mother was captured during the ceremony. Let’s take a look at the quote in its entirety below:

“You made us believe. You kept us off the street, put clothes on our backs, food on the table. When you didn’t eat, you made sure we ate. You went to sleep hungry. You sacrificed for us. You the real MVP.”

If you take a minute to rewatch this portion of the speech in the above link, you will experience how emotional of a moment it was for KD and his mother. Unfortunately, the quote was made meme-worthy by the internet. I don’t think it was in a malicious way, but nowadays nothing is safe or sacred when it comes to a couple of cheap internet chuckles.

Kevin Durant works very hard at his game, and he knows that hard work is what got him to where he is today. It may sound silly because hard work didn’t make him a seven-footer. But there are plenty of seven-footers that never made it in the NBA. One of the biggest things that separate those players from KD is the amount of work Durant puts in during the off-season.

The quote itself is an interesting one. What Durant is saying essentially, is that the work you put in doesn’t always equate to playing well, but you most certainly will not play well if you don’t put the work in. In other words, the journey is just as important to Durant. And, when all else fails, you know that you put the work in to succeed.

3. “I’ll play all five positions if my team needs me to.”

When Kevin Durant made the move from Oklahoma City to Golden State in the 2016 offseason, many thought he was just chasing rings. Durant was only motivated by one thing when he made the move: basketball. He has spoken in interviews about just how fluid the Warriors style of play is and how much he enjoys it.

This leads us to the quote above. Basketball fluidity often means that you can make plays in any position from anywhere on the court. Durant fit in so well with the Warriors – who were coming of a 73-win season – because he is such a team-first player. He didn’t mind the idea of being out of position because he felt comfortable in any position, and the Warriors fostered that style of play.

It was a surprise to many around the league that KD stayed in OKC as long as he did. It didn’t matter to Durant that Oklahoma City was a “small market team” because he enjoyed his teammates and they had success. Durant is going to be the star on any team he joins, but that doesn’t mean he isn’t a team player, which is what KD was saying in this quote.

4. “Whoever wants my spot can play me one-on-one for it.”

Kevin Durant is a matchup nightmare. He usually plays on the wing, which means a guard or small forward has the task of guarding him. Good luck with that. Durant is seven feet tall and can shoot from anywhere on the court. His shot is unstoppable and he is quick enough to take you off the dribble if you play him up close. In other words, no one would like the destiny of their spot left up to a one-on-one game with KD.

The context behind the quote is actually quite interesting. In 2015 Durant, despite missing the majority of the first half of the season was selected as an All-Star. While no one denied Durant’s place on the team, some thought it was unfair he was picked because of how little he actually played. Durant had a proposition for anyone who felt they deserved the spot over him: play him for it.

During the interview, Durant cited how he never wanted special treatment but that every year involves All-Star snubs. He smiled a bit and then delivered the above quote. I doubt many lined up for that one-on-one game.

Back in 2017, after Durant and the Warriors downed the Cavaliers quite handily in the NBA Finals, many were asking the question: Durant or LeBron? Durant had played magnificently and, even though LeBron played great as well, many were wondering aloud if KD and not the King was the best in the world.

This quote is a nod to the fact that at one point KD and LeBron were the two best, and Durant is well aware of it. Let’s take a look at the whole quote below:

“I don’t watch a lot of other basketball away from the gym. But I do look at LeBron’s box score. I want to see how many points, rebounds and assists he had, and how he shot from the field. If he had 30 points, nine rebounds and eight assists, I can tell you exactly how he did it, what type of shots he made and who he passed to.”

Great players definitely keep tabs on the other greats. Because KD is so good, guys like him, LeBron, Steph, and Giannis al have to find a measuring stick. Those players are usually other top talents. This quote goes to show you that even though Durant only worries about his own game, he is still looking over his shoulder at players that are on his level. It also displays how much of a student of the game these guys are as well.

Related Reading: KD vs. LeBron: Who is Better

Kevin Durant is a lock for first-ballot Hall of Famer. These quotes help you peek behind the curtain to see what superstars really do think about themselves, their peers, and the game they love. It shows you that Kevin Durant is no different than anyone else, but in a way, he is. His hard work and talent have placed him on a level that many don’t achieve. If he wasn’t this popular, then we probably wouldn’t be analyzing his quotes.

What is your favorite Durant quote? Is it on this list? Let us know in the comments below!