How Much Does Kevin Durant Weigh? 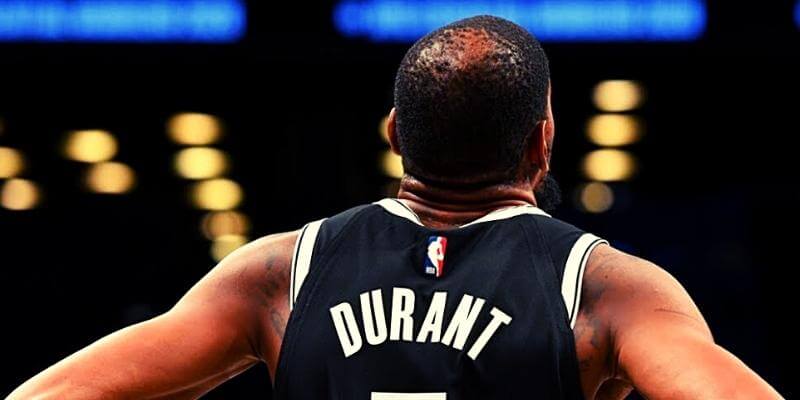 NBA players are large across the board. Almost all of them are quite tall, but that height typically comes with a lot of weight too. A large frame isn’t as big of an advantage as height. However, in the case of someone like Kevin Duant, it directly attributes to a player’s success.

In this guide, I look at Durant’s weight, as well as how it’s fluctuated throughout his career. That shows, not just how he uses his large frame to succeed on both sides of the court, but how oversized players operate in a range of different roles across the league.

Too Long, Big, and Tall

Durant is not particularly large for an NBA player, but he’s extremely big for his position. He stands 6’10 without shoes and his wingspan is an incredible 7’5. That puts him more than three inches above the league average for small forwards. Height is great to have by the rim, but it’s incredibly important on the wing.

By being so much taller, and having such a longer reach, than those he matches up against, Durant is able to work in a way that similar players can’t. He’s almost never contested when he shoots, and it’s incredibly hard for smaller players to score or go around him.

That being said, height is not the only reason Durant is a future hall of famer. His size, which has only grown over the years, is instrumental to his playstyle as well.

Towering over the competition is important, but it’s not as useful with the size to back it up. There are plenty of taller players in the league who didn’t see success due to the fact that they couldn’t bulk up and make proper use of their body. Even Durant had those issues early on.

When he first came into the league, the lanky sharpshooter weighed a modest 215 pounds. That’s not small for shorter players, but it’s very skinny for someone who stands almost 7 feet.

His weight was a cause for concern for many scouts and analysts who weren’t sure that he’d be able to take full advantage of his size in the lane or post. While that turned out to be true, and Durant didn’t have a ton of size against other NBA players, it wasn’t a huge issue.

That’s due to a combination of both his shooting and his length. He did a great job of contesting players, got a lot of blocks, and could simply rise up to shoot or score over his smaller competition.

Durant thrived early on in the NBA because he had a unique skill set. However, as talented as he was, his game did lack a few levels due to his lean frame. While he had a lethal pull-up and a dangerous outside shot, he couldn’t body up opponents that well.

Without being able to assert himself properly, Durant couldn’t push through defenders on drives or sit down in the post against big men. That led to him being a more one-dimensional player who would always look to shoot first rather than go to the rim.

To overcome that, Durant began to gain muscle. After always being undersized, the tall outside shooter began to lift weights and focus on putting on as much mass as possible. That regiment enabled him to grow from a modest 215 to nearly 240 pounds.

The Strength of Size

With Durant’s extra size came a lot of power. Not only did it give him the ability to develop a true post game, but he also could bump into defenders on drives without getting knocked off balance. His defense also greatly improved, as he could more effectively plant his feet.

That shows why being heavy matters in a sport like basketball. There are many great players with small frames, especially point guards, but having extra strength is always an advantage for scoring, rebounds, and being able to operate in space.

Weights fluctuate greatly throughout the NBA. Some players are quite small and speedy, while others are large and powerful. Durant started out on the guard end of the spectrum and steadily got stronger and stronger until he could do a little bit of everything.

Kevin Durant is truly one of a kind. There have been tall outside players before. However, only a few of them have been as tall, as big, and as skilled as the small forward. He didn’t always have the size he needed to assert himself, but he only got bigger as time went on.

Durant now has multiple championships, scoring titles, and an MVP to his name. There’s no telling if he would have achieved those goals without getting bigger, but his additional weight certainly helped.