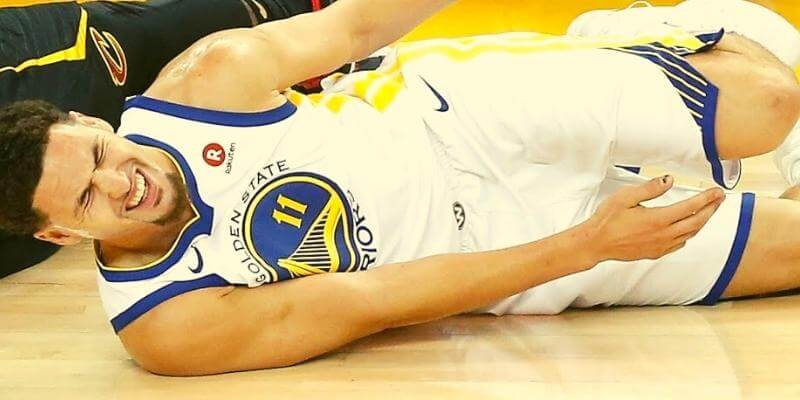 Every athlete, regardless of level or experience, deals with injuries at one point or another. Sometimes they happen young, sometimes they occur when people move up to a higher level, but most often they occur with age. That’s exactly what happened to Klay Thompson.

In this guide, I will discuss a number of issues and injuries the Warriors guard has had to deal with during his NBA career. That will give insight into how each happened, as well as how the star dealt with them.

Thompson and Curry exploded onto the NBA scene as one of the best shooting tandems in league history. Part of that was their unmatched ability to hit from deep, and part of that was due to the fact that both players were able to stay on the court.

There have been quite a few great players, including both Ben Simmons and Joel Embiid whose careers were delayed due to an unfortunate ailment. Thompson, on the other hand, never had such issues. He played a lot early on and quickly adapted to the pace of the NBA.

By being able to acclimate early on, he got used to the speed much more quickly than those who had to learn and heal at the same time.

In fact, from the time he went to the Warriors in 2011 until the 2017 season, he had very few (if any) lingering issues.

While Thompson did miss games every now and then due to rest or general discomfort during the Warriors multi-title run, his body stayed relatively healthy throughout each season. Even when Curry went down with ankle injuries, he took on the load and carried the team.

However, that didn’t last. Thompson began to deal with more serious issues during the 2017 and 2018 seasons when he sprained his left ankle multiple times. The lingering ailment kept him out of multiple games and kept coming back despite him sitting out.

During those seasons, he also had a number of knee and hand problems. Though he pushed through both of them without losing any serious time, both kept on into 2019. Thompson’s ankle didn’t cause him too many issues, but his knee certainly did.

Though Thompson initially didn’t miss too much time due to an injury, his luck finally ran out during the 2019 playoffs. When going up for a dunk during game six of the Finals, he got hit from behind by Danny Green. The contact led to an awkward fall that tore Thompson’s ACL.

While the collision was certainly incidental, the injury took a big toll on both Thompson and the Warriors. It didn’t just sideline him for the rest of the series (likely costing Golden State a championship) but it kept Thompson out for the entirety of the 2019-2020 season.

After a disappointing year, the Warriors were hopeful to have Klay back. Unfortunately, it wasn’t meant to be. While his knee rehab went great, his ankle gave out on him next. A few weeks after coming back to the team, the guard tore his right achilles during practice.

Suffering a second major injury so soon after the first was a disaster for Klay. While he wanted to get back on the court, the achilles kept him out for another entire season.

Don’t Call it a Comeback

Almost no one ever recovers from two major injuries. However, after Thompson returned in January 2022, he’s been his old self in a lot of ways. He’s been scoring, putting up threes, and has even recovered his ability to move on defense.

That combination gave the Warriors new life and allowed them to get back to their winning ways. He’s not quite the same player that he used to be, but he’s still one of the premier guards in the entire league.

Thompson is an outside threat with a quick first step. As such, he’ll likely be around for quite a while. It’s all about keeping up his health, doing his rehab, and ensuring that he doesn’t have any other big issues to his knees, ankles, or feet.

Injuries aren’t fun for players, and they aren’t fun for fans. Still, they’re a part of every sport that all athletes have to deal with. As Klay Thompson showed, being healthy early on is important, but maintaining that high body level is not always easy. Most of the time, it’s impossible.

Thompson shows that, while ailments are a part of sports, they don’t have to end your career. Many ailments that would have permanently sidelined players in the past, are now beatable. While it’s not sure if he can stay healthy forever, if he does the Warriors may get back on top.