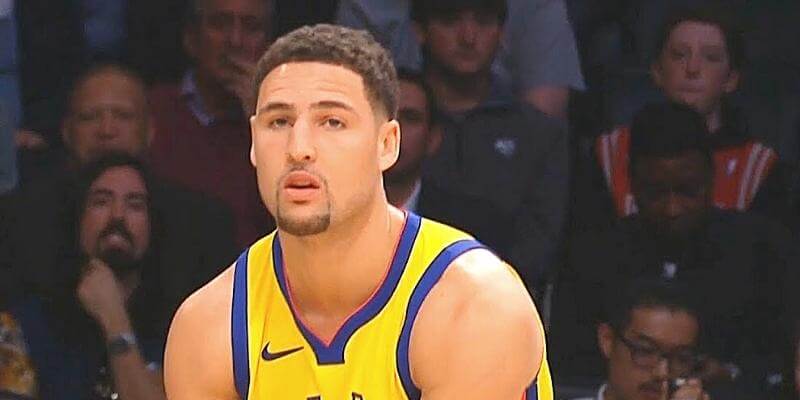 NBA players all make a lot of money, but how much money an athlete can earn directly ties into their on-court success. Not only do good players get big contracts from their organization, they are much more likely to bring in endorsements too. That’s how Klay Thompson cashed in.

Here, I look at the Warriors guard’s net worth. That breakdown will show, not just where most of his money comes from, but also how his wealth stacks up with other great NBA players.

A Lifetime of Contracts

Thompson is one of the best players in the NBA, and that’s reflected in his net worth. The shifty shooting guard has an amassed wealth of roughly $70 million, putting him towards the top in terms of all NBA players. He’s short of the $100 million mark, but he has a great life.

Unlike some other big time players, most of Thompson’s money comes from personal contracts rather than external deals. Still, he has a decent amount of endorsements too. All of those sources come together to build his personal fortune.

After being selected 11th overall by the Warriors in 2011, Thompson quickly grew into one of the best shooting guards in the NBA. He was an excellent outside threat who could use his size on defense as well. That made him a true two-way threat most teams couldn’t match.

Even so, he didn’t go to a traditionally great school. Without a high pedigree behind him, Thompson signed a rather modest rookie deal. The Warriors paid him a standard four-year rookie contract with no incentives. That’s strange now, but it was par for the course at the time.

He earned just under $2 million during his first year, then a little over in year 2 and year 3. The last season on his deal did pay him a bit more (over $3 million) but he didn’t sign his first big check until his next deal kicked in.

After showing his skill and becoming one of the most important parts of a championship caliber team, Thompson netted a four-year rookie extension worth $69 million. That would carry him through the Warrior’s championship years and pay him more and more with each ring.

From there, he only got better. After bringing the Warriors their first rings in decades, Thompson finally penned a gigantic five-year $189 million contract. That put him over the top and ensured he was one of the highest paid players in all of the NBA.

In fact, once his current deal ends he will have earned a staggering $268 million from his contracts alone. That’s more money than almost all NBA players will ever see, and shows how top athletes earn compared to role players.

As mentioned, Thompson’s wealth mostly comes from his contracts. However, he’s done pretty well in terms of endorsements too. He’s not a terribly high profile player, which means he doesn’t bring in big brands like Lebron James or his teammate Stephen Curry.

That being said, Thompson still works with various companies. He has partnerships with a wide range of brands. That includes Panini America, Bevel, NERF, Gillette, Waiakea Water, and BodyArmor. Such endorsements earn him roughly $14 million a year.

Diversifying those deals allowed Thompson to bring in quite a bit of cash every season. However, the guard doesn’t rely on smaller contracts. He backs up all of those more modest signings with a single major one.

Where many NBA players choose to go with an American brand for their shoe deal, Thompson went to the other side of the world. He’s always been big in China, which is why he signed with the shoe brand Anta versus something like Nike, Adidas, or Under Armour.

That contract, which totals $80 million and pays out $8 million a year, accounts for more than half of Thompson’s total yearly endorsement earnings. He doesn’t have a ton of investments, nor is he behind a ton of companies. Still, his shoe deal carries a lot of weight.

Thompson is not a player looking to move his money around. Luckily, he’s gotten so much during his career, he doesn’t have to.

Thompson is a lock-in hall of famer who’s been an instrumental part of several great NBA teams, and he’s paid like it. Though he’s not quite in the upper echelon of highest paid players, he has a staggering amount of money compared to the average person.

The guard’s dealt with a lot of injuries as of late. Though some people speculated that might hurt his future contract potential, he’s come back stronger than ever. That, combined with the Warriors’ recent success, suggests another large contract is on the way in 2025.