Is Klay Thompson Black or White? 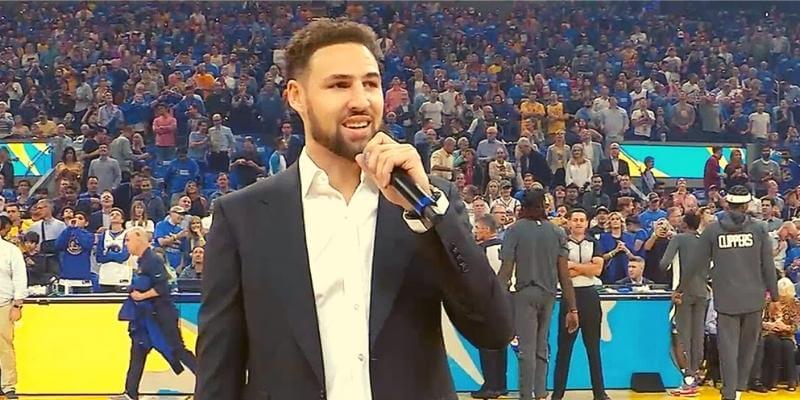 Just like in real life, ethnicity is hard to determine in the NBA. All players come from unique backgrounds and upbringings, which makes it tough to figure out their parent’s race. That’s especially true for players like Klay Thompson.

This guide looks at the Warriors superstars’ upbringing and family. Both of those aspects give insight into his ethnicity and reflect on the racial makeup of the NBA as a whole.

Most fans who see Klay Thompson assume he’s white. While that’s partly true, he’s actually mixed race in the exact same way as Blake Griffin or Lonzo Ball. He just happens to be light-skinned, which often leads people to make the wrong assumption.

There are plenty of biracial players in the NBA, but most of them look mixed. Thompson is more unique because gets his skin tone from his mom’s side. That makes him look more white, similar to other biracial superstars like Mike Bibby and Jason Kidd.

Thompson is an excellent basketball player, and he’s always had the game in his blood. His dad, Mychal Thompson, was also a great player in his own right. So great, that he was the first overall pick of the draft way back in 1978.

Though he didn’t quite have enough to live up to the number one overall hype, he did have a solid career. Mychal played in the league for fourteen years and won two championships with the Showtime Lakers during his run.

He also made noise, not just for his skill, but for being the first-ever foreign born player to be selected at the top of the draft. He’s from Nassau, Bahamas and came to the United States as a teenager when his family realized he needed better competition.

That makes Klay half Bahamian, and he traces his roots back to where his dad originally grew up.

While Klay’s dad is black, his mom, Julie Thompson, is white. She’s an American-born athlete from Ridgefield, Washington. Like Klay’s dad, she’s also an athlete. She played volleyball at both the University of San Francisco and the University of Portland, where she thrived.

Currently, she’s a successful career woman in academia. Her love of sports and inherent athleticism helped Klay, and her lineage goes back to western Europe. Klay gets his skin tone from her side of the family.

The NBA is a league that’s predominantly split between black and white players. In fact, 81.1 percent of the league is African American, while 17.9 percent is caucasian. That only leaves 1 percent for other races like Asian and Latino.

Of course, biracial players fit into both categories. Still, they aren’t as common as many might think. Just 12.5 percent of the entire NBA is biracial, making players like Klay Thompson a bit of a rarity in the professional basketball world.

Klay Thompson is one of the few biracial players in the NBA. Despite that, he’s often mistaken for a white player due to his skin tone. That doesn’t bother him too much, especially because he has a strong connection to his mom, but it’s something that does come up from time to time.

Regardless, his race is irrelevant to what he’s able to do on the court. He’s one of the best shooting guards of all time, and can shoot like nobody’s business. There’s no doubt that his athleticism comes from both parents, but his skill and development is all on him.